What is the emission spectra of electrons under the Zeeman/Stark effect?

As the Zeeman effect/Stark effect lead to a change in the energy levels of orbital electrons in relation to their spin, similar to hyperfine transitions, I was wondering what the emission spectra of this transition in energy states is. To expand upon this idea, the hyperfine transition of the hydrogen atom, the hydrogen line, has an emission spectra of 21 centimeters. Do atoms or any systems with electron confinement also have emissions in these spectra or any other when subjected to the Zeeman/Stark effect?

An external (i.e. not caused by the atom's own nucleus or electrons) electric/magnetic field can lift the degeneracy among hyperfine levels. These are defined by the total (spin + orbital + nuclear) angular momentum $F$, and are degenerate among their $m_F$ sub-levels.

Electric (Stark effect) and Magnetic (Zeeman effect) both break the spherical symmetry and hence differentiate $m_F = 0$ from $m_F \neq 0$. The Stark effect, in particular, breaks the degeneracy among $|m_F|$ levels, while the Zeeman effect (also breaking time-reversal symmetry thanks to the external magnetic field), also lifts the $\pm m_F$ degeneracy.

I am assuming that by this:

what the emission of this change in energy states is

you are asking "can we have transitions among these newly created sublevels", the answer is yes.

The spontaneous emission from, say, a $|F,m_F\rangle = |2,2\rangle$ to a $|2,1\rangle$ is minuscule since it has to be at least a magnetic dipole transition (rate $\propto \alpha^{13}$) and because the spontaneous decay rate goes as $\omega^3$ (and this splitting has very small $\hbar\omega$).

But you can provide an external source (usually RF) to move at atom between these states, and get Rabi oscillations among these states, for instance: 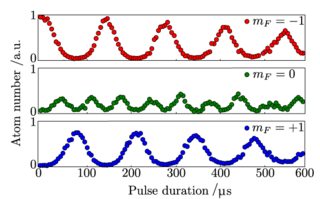 where a small magnetic field lifted the $m_F$ degeneracy in the $^{87}$Rb $|F\rangle = |1\rangle$ grond state, and an applied RF pulse of variable duration is shown to induce Rabi oscillations between the $m_F$ sub-levels.

After question was edited with addition

Do atoms or any systems with electron confinement also have emissions in these spectra or any other when subjected to the Zeeman/Stark effect?

The Zeeman and Stark effect only shift existing hyperfine levels, so yes the transitions that were "already" there still exist, though now you also have to care about the $\Delta m_F$ selection rule. On top of those, you have "new" transitions that may arise, which is what I have described above.

Not the answer you're looking for? Browse other questions tagged quantum-mechanics electromagnetism nuclear-physics atomic-physics quantum-spin or ask your own question.

4
Effect on electron shells energy levels during nuclear decay
0
Do we get Lyman like emission after proton capture?
2
The stark effect of Hydrogen