How do Fermi-Dirac statistics contribute to fermions in the Pauli Exclusion Principle?

So I’m doing some research on Quantum Chromodynamics and I've come to an area in which I’m having some trouble arriving at a conclusive answer. Apparently the Pauli exclusion principle states that no two fermions can have the same quantum numbers, which is supposedly the same as saying that no two fermions can be in the same quantum state, (are those effectively saying the same thing)? And fermions are particles with half integer spins that obey Fermi-Dirac statistics. Please explain what Fermi-Dirac statistics are, I’m having trouble with contradictory or confusing answers in other sites. Help would be appreciated! Very important: The fermions I am talking about are quarks, not electrons

Yes they mean the same thing. A quantum state is uniquely determined by a set of quantum numbers.

The fermions I am talking about are quarks, not electrons

Does not matter. Electrons and quarks are both fermions. The Pauli exclusion principle will apply to two identical electrons or to two identical quarks. It will not apply between an electron and a quark as they are distinct particles (distinct mass).

So there are three levels to this:

Physically, this is because the labelling is done by us the experimenter and thus should not have any effect on the system itself and its evolution. Elementary particles are indistinguishable so we cannot label them once and expect them to "keep" their label.

So the total wavefunction $\Psi(1,2)$ will be: $$ \Psi(1,2) = \phi(1)\psi(2) \pm \phi(2)\psi(1). $$ For identical particles $\psi = \phi$ and hence the $\pm$ determines whether or not the two particles can coexist. The plus sign case means they can co-exist and they are called bosons, while the minus sign gives you a zero and hence they cannot co-exist, and are called fermions.

A neat example is considering two electrons in two states of a square well, and you can see that for the $-$ sign ("anti-symmetric" because $\Psi$ picks up an overall minus sign upon particle exchange $1\leftrightarrow$2) the probability of finding the particles at the same position $x=y$ is always exactly zero:

The argument above is dumbed down a bit but can be rigourously derived from the topology of particle exchange.

The above requirements are usually summarised as commutation and anti-commutation relationships:

The spin-statistics theorem, essentially (after lots of maths and proofs and stuff) entails these relations for the creation ($a^\dagger$) and annihilation ($a$) operators of particles (more correctly fields) with angular momentum $j$:

and, in order to match these to the relations above, you get that fermions must satisfy $2j \in \mathbb{Z} \implies j \in \mathbb{Z}/2$. Hence fermions have half-integer spin, because $j$, in the absence of any other (orbital) angular momentum, is just the spin.

Any single-particle (non interacting) system is described by the following thermal density matrix, that is Boltzmann distributed:

So this is where the Fermi-Dirac (FD) distribution function comes from.

It is derived from the Pauli exclusion principle, and it is hence compatible with it. If you plot it (below, for some non-zero temperature), you see that $f$ is at most one for fermions: you can have maximum $1$ particle per quantum state. 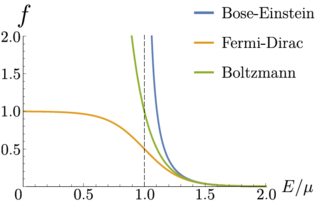 and this function does not exceed one, meaning you never have more than one particle in a certain quantum state, unlike in the case of the Bose-Einstein distribution function.

Do you want to know how comes that half-integer spin is related to such a distribution function?

This is a really deep and interesting topic! I hope this answer helps to clear up some confusions.

The Pauli exclusion principle states that no two indistinguishable fermions can occupy the same quantum state. We can see that this holds by considering the case that $n_1=n_2$ above. In this situation, $\Psi = 0$ identically. That means there is zero probability for the fermions to be in the same state. Note this is not the case for bosons.

The spin-statistics theorem tells us that the phase acquired by the wavefunction when two particles are exchanged is the same as the phase acquired when one particle undergoes a full $2\pi$ rotation. So fermions pick up a minus sign when you rotate one of them by $2\pi$. This is telling us that they must have half-integer spin, which is not at all trivial! I would suggest reading up more on spin specifically if you're interested in this connection.

Important: The above facts are true for any type of (indistinguishable) fermions. Electrons and quarks obey the same rules in this sense. However, Fermi-Dirac statistics (referring to the minus sign picked up by the wavefunction upon particle exchange) are not the same as the Fermi-Dirac distribution. The FD distribution is obeyed by non-interacting fermions that are in thermal equilibrium with a reservoir with which they can exchange particles. In particular, quarks are very strongly interacting particles and so would not obey the FD distribution. Exchange statistics (and the Pauli-exclusion principle) are a more general, deeper fact.