Stark Effect on the 1st excited state of Hydrogen

I know the ground state of hydrogen is unaffected by the Stark effect to first order. And I also know that the 1st excited state is split from 4 degenerate states to 2 distinct, and 1 degenerate state like this:

But I don't quite understand why. I imagine it is something to with (anti)symmetry of the wavefunctions and selection rules.

quantum-mechanics atomic-physics hydrogen
Share
Improve this question
asked May 13 '13 at 18:08

What happens, essentially, is that the S and P wavefunctions get mixed to produce eigenstates that have shifted centres. This means the atom gets an induced electric dipole moment, whose interaction with the external field either lowers or raises the eigenenergy.

More specifically, consider the wavefunctions of the states $|200\rangle$ and $|210\rangle$: 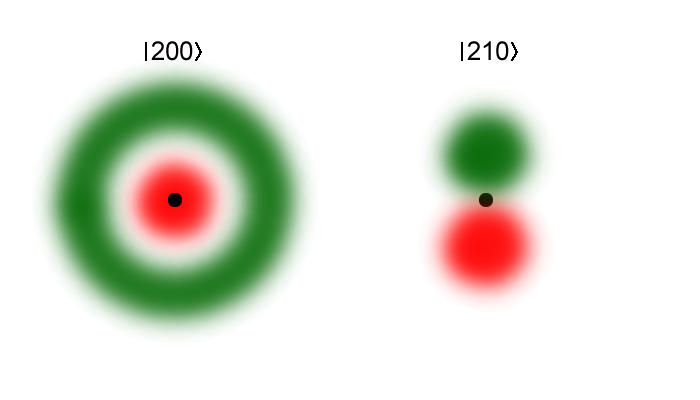 The first is spherically symmetric, while the second has two lobes where the wavefunction has different signs.

If the field is strong (i.e. stronger than the fine interaction, which separates these two levels, but not strong enough that levels with other $n$ get involved) then the eigenstates will be even mixtures of these, but with different phases, as your diagram indicates.

This should really be done properly, but for an intuitive picture adding equal colours amplifies them while adding opposite colours cancels them, and vice versa for substraction. If you do that, you get something like this: 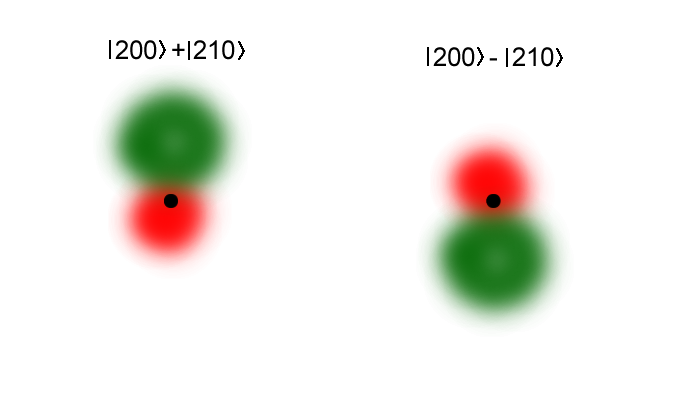 Note in particular that the electronic centre of charge has moved from the origin, which means the states have nonzero dipole moments. With the electric field pointing downwards, the state to the left has a lower energy and the one to the right is raised.

Ordinarily these superpositions would "slosh" back and forth between one and the other, as the fine-structure difference in energy between them caused the P state to accumulate phase (as $e^{-iE_{21}t/\hbar}|210\rangle$) slightly faster than the S state. With the field present and pointing downwards, the state to the left stays where it is because the field keeps pulling the electron back. The state to the right is forced to its high-energy position by the requirement that it be orthogonal to the first.

Having done that, saying that the field is strong w.r.t the fine interaction means enforcing the condition that $E_0 d\gg|E_{21}-E_{20}|$, i.e. working in the approximation that $E_{21}\approx E_{20}$. In this approximation the hamiltonian in the subspace $\text{span}\{|200\rangle,|211\rangle\}$ is (up to a change of origin in energy) of the form $\begin{pmatrix}0&1\\1&0\end{pmatrix}$ and the eigenstates are as above. (If the field is not quite as strong then there will be small off-diagonal terms, and the mixing will not be quite as good. For the details, diagonalize! It's relatively easy as it's a simple two-level problem.)

This is really all the formalism one can put into it without overdoing it. To do the problem more rigorously you should expand the physical boundaries of the problem: if the field is weak, consider the effects of fine and even hyperfine structure; if the field is strong then consider mixing of different principal subspaces, and work to higher than first order. Both directions mean quite a bit of work and they do alter the results you quote. (They have to!)

Not the answer you're looking for? Browse other questions tagged quantum-mechanics atomic-physics hydrogen or ask your own question.