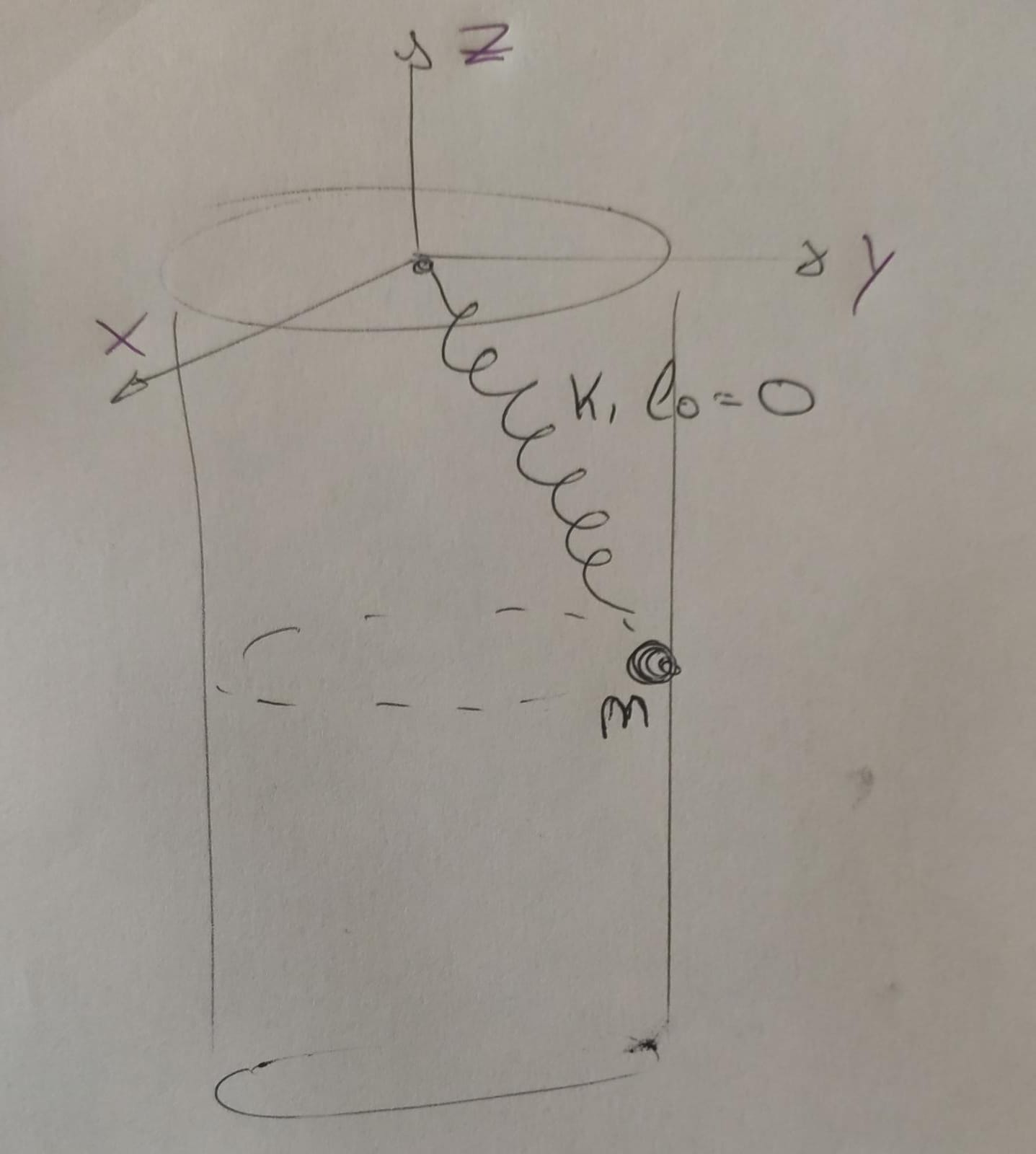 My procedure is the following in cylindrical coordinates ($\rho,\theta,z$):

$$ \lambda_\rho=k\rho-\frac{L_z^2}{\rho^3m} \quad \lambda_z=k+mg $$ The problem and my question is when I get the generalized forces, I don't understand what kind of force I'm working with. I mean, if I have a strong spring($k_\rho>\frac{L_z^2}{\rho^3m}$), so the constraint force is positive at $\hat{\rho}$, is this still the reaction force? Shouldn't be negative why it's positive, specially if I'm dealing with a particle that starts without velocity. And the same goes for $\lambda_z$.

I don't really understand what I'm getting and their physical meaning.

Any help will be very much appreciated.

So a holonomic constraint like you've got, exerts a force perpendicular to itself, which is whatever it needs to be to keep the particle on that constraint. It's just the normal force due to the constraint, coming from whatever is enforcing (no pun intended) the constraint. The dynamical expression for it will mostly reflect all of the things that are trying to violate the constraint.

In this case, your particle needs its spring force in the radial direction canceled out, because we can't have it accelerating in the radial direction, but then it also needs an extra term which is a centripetal force, because it needs to be kept in a circular motion about the $z$ axis. So given that you derive this extra force-term, you can immediately understand that there are these two aspects of alternate sign, if the spring is very strong compared to the spin rate, then the cylinder needs to pull the mass out from its natural tendency to fall into the center: but as you spin it faster around the center, the constraint starts to need to push it in towards the center instead, otherwise it will want to fly off in a tangent plane.

You should not have a Lagrange multiplier for the $z$-direction because that is not a constrained dimension. Unless, maybe, you are only investigating the case where the particle is stuck at the top of a finite cylinder and so the kinematics become one-dimensional? If so, then the answer is very easy as you have seen, angular momentum is conserved and $\theta(t) =\theta_0+\omega~t$ for some $\theta_0,\,omega.$ But more usually you should also get that $z(t)=z_0+A \cos(\Omega~t+\phi)$ or so, a simple harmonic motion in the $z$-direction.

Just as one further tip, it is overkill to use Lagrange multipliers in a Lagrangian mechanics calculation if your generalized coördinates already implement the constraint. The nice thing about lagrangian analysis is that it allows for generalized coordinates. You can just say “due to my constraints $\rho=R,\dot\rho=0$” at the outset and save quite a bit of paper, heh.

Not the answer you're looking for? Browse other questions tagged homework-and-exercises classical-mechanics lagrangian-formalism spring constrained-dynamics or ask your own question.

6
Lagrange multiplier and constraint force
3
Help understanding what the Hamiltonian signifies for the action compared with the Euler-Lagrange equations for the Lagrangian?
6
Lagrangian of a 2D double pendulum system with a spring
4
Lagrange's Demon de-Conserves Angular Momentum
2
Approximations for a spring pendulum's equations of motion in 2D
1
How to find the equations of motion with a constraint?
2
Deriving the geodesic equation using a Lagrange multiplier to fix affine parametrisation
1
Sign of Lagrange multiplier
0
Particle in a cylinder with a spring, sign convention in potential energy (Lagrangian multipliers)