Will a measured "temperature above ambient" remain constant in the face of a changing ambient temperature?

I've got some fully-enclosed, outdoor brass landscape light fixtures. I chose a (12V) bulb that, when measured with a benchtop power supply, dissipates a constant 0.8W.

On a cool, windless night, after the light had been running for many hours and had presumably reached a stable equilibrium temperature, the exterior of the soda lime glass measured ~11°F hotter than the surrounding environment: 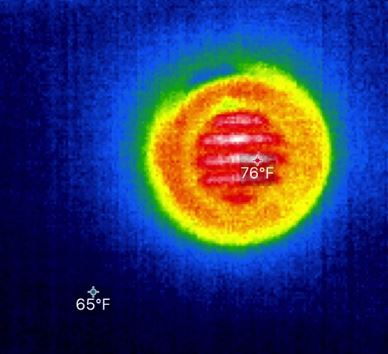 In my area, the hottest day of the year is typically July 19. The lights only run from sunset to sunrise, with the hottest part of that interval occurring right at sunset. The 90th-percentile temperature band in the chart on that site appears to read ~83°F.

Assuming a similarly windless but 83°F evening, after reaching a stable equilibrium temperature, would it be safe to expect the same point on the fixture to measure 83+11 = 94°F?

I am interested in the max temperature experienced by the interior of the fixture. (I'm hoping to take interior measurements eventually, but haven't gotten there yet.) The faceplates of the fixtures are only briefly in direct sunlight during the coolest part of the day in the early morning, while the lights are not running. Perhaps I shouldn't rule out that period of direct solar radiation as reaching a higher temperature than while running at night?

I'm not trained in heat, but all the formulas I've seen show $\Delta T$ and don't seem to depend on an absolute temperature anywhere. That said, I did notice while reading that some of the "constants" like the specific heat capacity are temperature-dependent functions, although Wikipedia has disclaimers like:

However, the dependency of $c$ on starting temperature and pressure can often be ignored in practical contexts, e.g. when working in narrow ranges of those variables.

After looking up the tables for $\kappa$, $c_p$, etc. for the materials involved, they don't seem to vary much more than one percent or so in this 60-100°F range of interest, so it seemed safe to rule that facet of the problem out. (To compensate, maybe I should expect +12°F over ambient instead of +11?)

So, ignoring that aspect, is the rest of this a safe way to conduct a "how hot could it get" analysis? Does it sound like I've missed anything important?

(At this point it's mostly academic curiosity, although I do expect to install a custom parabolic'ish reflector inside the fixture, made from an intentionally high-temperature epoxy resin. I'm pretty sure I've got a safety margin on the order of 100°C but I got caught up in the question itself along the way.)

thermodynamics heat-conduction
Share
Improve this question
asked May 12 at 3:01

There may be a slight lag, but you can expect the interior temperature to track towards a fixed offset from ambient.

You seem to have found all the details already youself

Barring upsets like the introduction of phase-change materials (eg snow melting or rain evaporating) it will follow the fixed offset.

Not the answer you're looking for? Browse other questions tagged thermodynamics heat-conduction or ask your own question.