It is known (e.g. as mentioned in this popular article) that the reason why deserts cool down at night so much (to temperature below zero degrees celsius) is that there is much less humidity in the air in the desert. In quantitative terms:

"Water vapor accounts for the largest percentage of the greenhouse effect, between 36% and 66% for clear sky conditions and between 66% and 85% when including clouds" (Wikipedia)

So, I imagine, it should be relatively easy to detect in the desert the change in the greenhouse effect due to human carbon dioxide and methane emissions. If up to 85% of the radiative transport resistance are missing, the remaining 15% should result in about 7 times the amount of radiative transport in the cloudless desert compared to a cloudy anyplace in the world. Hence, also every change in radiative transport due to rising atmospheric carbon dioxide and methane should be amplified by up to about a factor of 7 in the desert, and therefore, be much more apparent/detectable.

I think, Fourier's law could yield a reasonably good approximation of how desert temperatures evolve, that is $$\frac{\partial T}{\partial t}=-aT+b\dot Q$$ where $a$ is a coefficient that summarizes the effects of heat conduction, convection and radiative transport (including the influence of $CO_2$ concentration) in the IR range (at the $CO_2$ window) and $b$ and $\dot Q(t)$ take care of solar heat production during the day. If $\dot Q(t)$ becomes about zero, like at night, we have undisturbed cooling against space (assume $T_{Space}\approx 0$, as already incorporated in the above form of Fourier's law).

Is there experimental or theoretic evidence that the nightly desert temperatures are as sensitive to $CO_2/CH_4$ as sketched here?

Note: the above rough estimate (7 times) is, of course, neglecting (among others) any positive feedback between water vapor and the man-made $CO_2$ and $CH_4$. However, since I am only asking about the ideal dry desert (say the Atacama, where there is not much water to evaporate) and not about world climate, the positive feedback through vapor can be neglected.

Note #2: As a motivation, the climate modelling community seems to have set priorities low on the influence of carbon dioxide on desert temperatures, since the initially mentioned article states the following:

Researchers are still figuring out how climate change may affect arid places and organisms, but "we're definitely going to see changes," DeNardo said. "For most deserts, we are predicting an average rise in temperature of 3 to 4 degrees Fahrenheit [1.7 to 2.2 C]."

This is an interesting question, but I think a difficult one. It is not my core area of expertise, so apologies to atmospheric scientists in advance. I’ll try to explain why I don’t think a conduction model works very well for modeling this and spend some time looking at it as a radiation problem.

So we can try to recast this as a radiation transfer problem and see if we can see if CO2 changing by a few percent could be detected thermally in the desert. Note this is cheating a bit. If you increase change the albedo of the desert a few percent, it is going to change the heat flux by 2 or 3 percent and the surface temperature some, but lets dodge this problem by saying if the surface temperature of the earth is 255 K or 350K the black body spectrum is not going to shift all that much. If we do that we can then consider the radiation from the earth at night, and the absorption of the water vapor, and the absorption of the CO2 as shown in these curves. 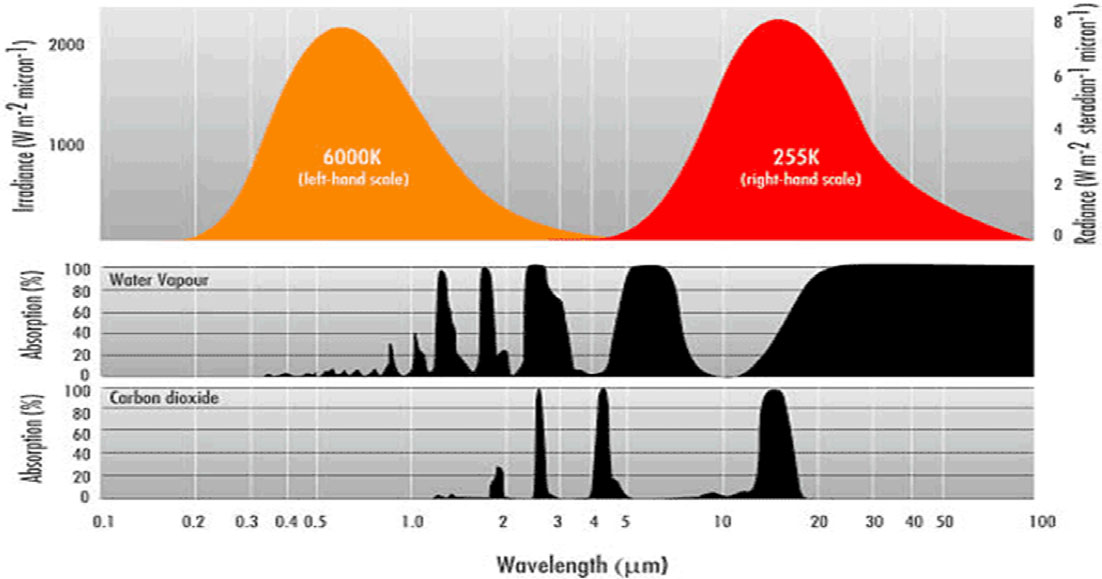 Note that for the black body curve for the earth, that the only the 10 um Co2 absorption is significant since there is not a lot of radiation to be absorbed for the shorter CO2 absorption lines.

Also the 10 um the Water absorption can be significant, so we need to look at the assumption that the percentage of energy absorbed by the CO2 is dominate. This leads to the question of even without clouds how much water is in the atmosphere? 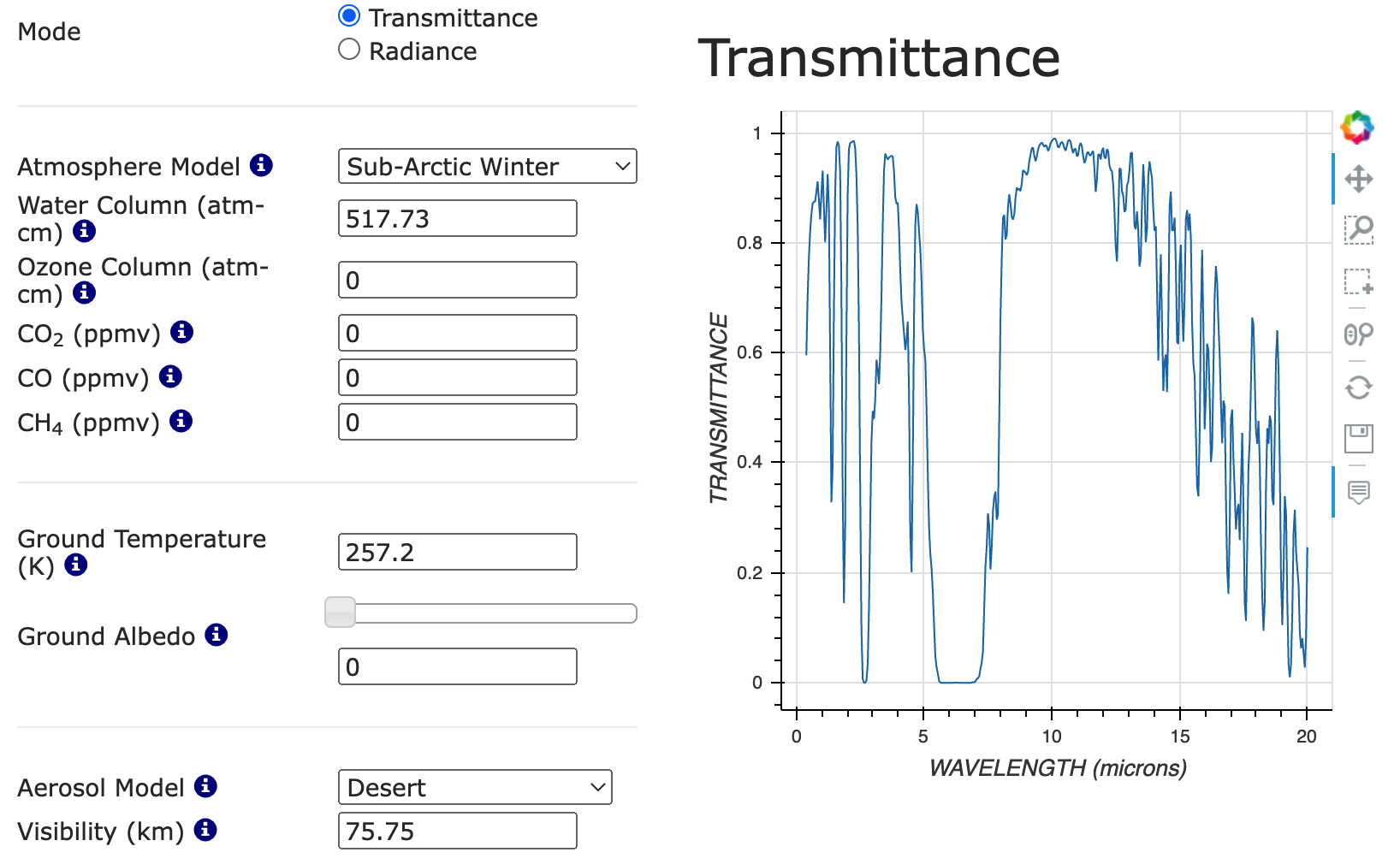 If we add in Co2 an other gasses, due to the low amount of water in the column we some loss in transmission, but not a lot in the 8-12 um range, we do see more absorption in the 14-17 um range in this model. 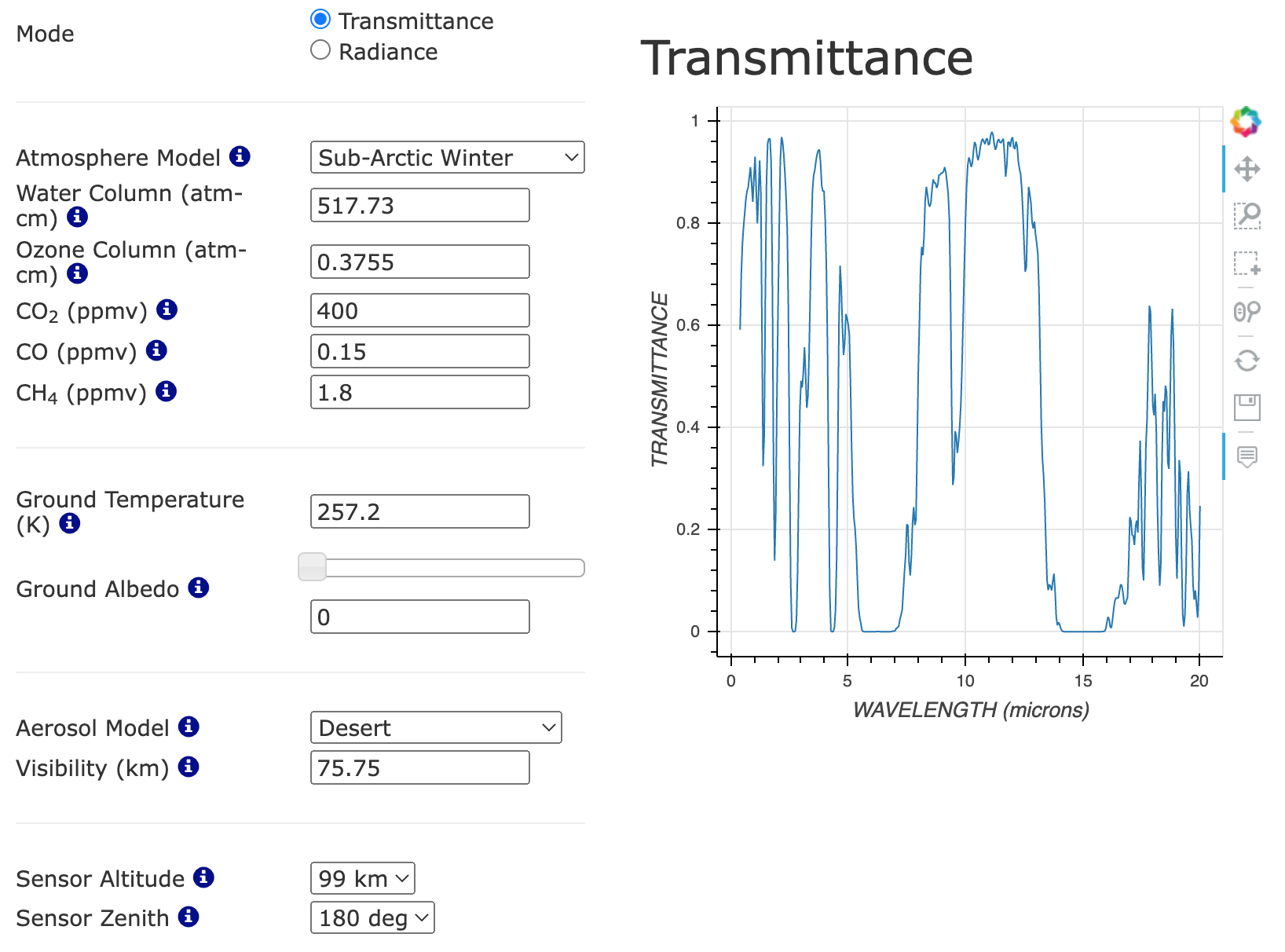 If we consider a case where there is a substantial water in the column the transmission is further reduce to about 80% for summer mid attitudes and or 60 precent for the tropics.

I think you can play with the MODTRANS website and change the Co2 Concentration and you find that it does cause a small change in the transmission, but even a 10% change in Co2 concentration doesn't change it a lot. That isn't to say that increasing Co2 isn't important...., but compared to water-vapor for this set of circumstances it is not a huge effect at 10 um. An there is more absorption occurring in the 14-17 um than without the gasses but an 10% increase doesn't seem to add a lot of absorption say going form 400 to 400 ppmv CO2. Where going from 10 to 100 ppmv has a big effect. But really what we care about is the 8-13um window since that is the transmission window that will let the most energy radiate into space. Outside that window the atmosphere is absorbing the earths blackbody and reradiating it back to the earth. Or if there are clouds the transmission window is closed.

So to get to the radiation transfer problem we can look a simplified situation and try to understand how much cooling to expect at night. Figure below are from "Radiative Cooling: Principles, Progress, and Potentials"

The authors consider a brand band or narrow band radiator depending on how to construct the system.

They go on to show that in the day time you can have radiative cooling of several degrees even in the daytime, and more than 10 degrees at night even in some places where there is still significant relative humidity.

So to see if you could detect a change in heat flux due to your 7 percent change in CO2, especially at night, you might be able to measure the heat flux in the 8-12 um transmission window by seeing a small temperature change due to additional absorption by Co2. However, it seems like it would be a relatively small signal. If you carefully design your instrument and place the temperature measuring portion in vacuum to minimize heating of the sensor by conduction you could probably make it more sensitive.

I'm pretty sure I missed some important physics in some of this, but maybe it gives and outline of someways to think about your interesting question.

There is a good atmospheric variable to asses your point: the number of frosty days per year. If this variable has been decreasing during last decades in a station located at a desert, should we have to attributte it to an increase in anthropogenic greenhouse gases?. I think the answer is yes, (given there has not been an equivalent increase in water vapor during the same time).

12
Why is radiative forcing from CO2 logarithimic and not a decreasing exponential?
14
How do greenhouse gases trap heat?
105
Explain it to me like I'm a physics grad: Greenhouse Effect
7
Is there a difference in the infrared absorption spectrum of a greenhouse gas when pure and when mixed with non-greenhouse gases?
5
Why is methane considered an important greenhouse gas?
6
Shouldn't $CO_2$ forcing depend on the surface temperature?
7
Can anyone explain the REAL reason why CO$_2$ increases global temperatures (not the simplistic greenhouse analogy provided for public consumption)?
3
Role of methane in global warming
0
Does burning natural gas reduce its greenhouse effect if it were to be released into the atmosphere?