So then I understand that the water in is a superheated state (and thus still a liquid). I see in a table of superheated water (Cengel, Thermal Fluid Science, Table A6) that at a saturation temperature of 300°C and a pressure of 3000 kPa (3 MPa), water has the following properties:

Do I understand this correctly? One more thing: Is the saturation temperature the same as the boiling point? The seems to be disagreement when I google it.

Do I understand this correctly and one more thing: saturation temp is that the same as boiling point. Seems to be disagreement googling it.

The saturation temperature is the same as the boiling point, but the mistake you are making is thinking that the specific volume, internal energy, and enthalpy for superheated steam at 300 $^0$C and 3000 kPa are for liquid. They are not. They are for the superheated vapor.

The following is offered as a primer on the steam tables which may help you to begin to more fully understand them.

The tables you were using are the Superheated Water Tables. These you need only to determine the saturation temperature (boiling point) corresponding to 3 MPa. Other than that, they only cover superheated vapor. You are interested in the liquid component of the steam. That you get in the Saturated Water-Temperature Tables.

Just so you can put the tables in perspective, see the diagram below. The overall curve that includes the saturated liquid line and saturated vapor line is sometimes referred to as "steam dome". Lines D, H, L etc. are constant pressure lines.

The area under the dome covers a mixture of liquid and vapor, called saturated steam. This area under, including the dome curve, is covered by the Saturated Water-Temperature Tables.

The area to the right of the dome is superheated steam and is covered by the Superheated Water Tables.

The area to the left of the dome is pure liquid.

The lines, points 1,2,3, and text in red is mine and is for your example. To find out how much liquid can be extracted from the superheated water of 300 C and 3 MPa, go to the Saturated Water-Temperature Tables. Interpolate between 230 C and 235 C to determine the specific volume of the liquid, $v_f$ in the table, where $f$ stands for fluid. This corresponds to point 3 in red (saturated liquid). You will see from the tables it is somewhere between 0.001209 and 0.001219. 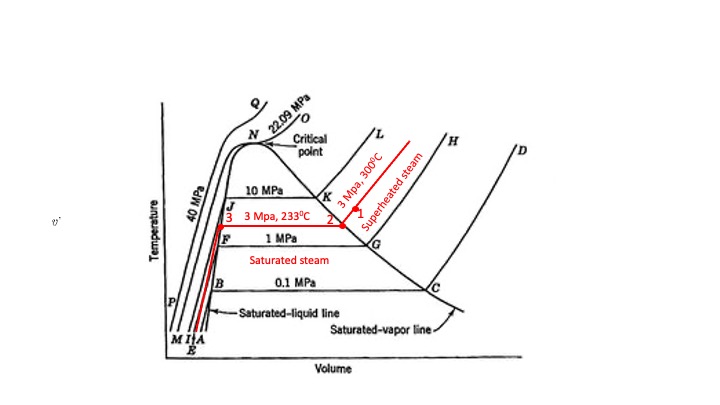 Not the answer you're looking for? Browse other questions tagged thermodynamics pressure temperature water phase-diagram or ask your own question.

0
What is the purpose of sensors and pumps with less than 1 ATM pressure?
4
Are pressure and volume not independent properties in liquid water?
0
How long can water hold elevated pressure and energy after opening pressure cooker lid?
1
Gas/liquid pressure equilibrium of water in an exotic environments
0
Consequences of $T_{sat}$ and $P_{sat}$ dependence
0
Pressure-Volume Diagram
0
Calculating the rate of pressure increase in a water-filled boiler
1
Are saturation temperature and boiling point same thing?
0
Why do some textbooks use $T$-$V$ diagram for temperature table instead of $p$-$V$ diagram?