Multiplication allows for different units: why can't we multiply apples by apples?

In school, we are taught that addition must use the same units (we can't add 3 apples + 4 bananas). On the other hand, multiplication (and division) is allowed between quantities of different units, and is used quite a lot in physics.

Now, if multiplication is allowed between different units, what is the result of 3 apples times 4 apples ?

I know it sounds naïve, but if $m\cdot m$=surface, why does "apples times apples" is meaningless ? (and no, in my head at least, an "apple square" does not represent anything...)

Do we live in a multidimensional space but only "one-dimensional-applewise" world ?

(maybe this question is purely philosophical... if so, let me know and I'll delete it) 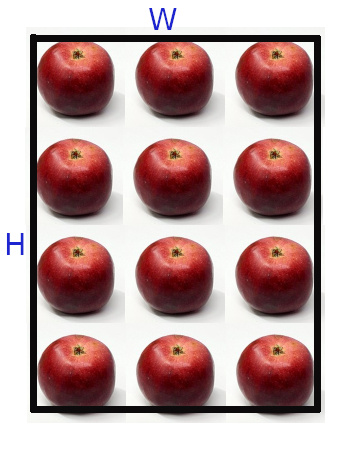 Definition of area doesn't changes if you use $m^2$ or $cm^2$ or $\text{apple}^2$, or anything else. So to say, mathematical expression is invariant of the units used at hand. One can even say that $t^2$ is hyper-surface in time. No problems at all.

One often arrives at delicate points when trying to find a literal connection between mathematical and physical approaches to problems. As G. Smith already commented, the important aspect here is modeling. Roughly, this goes in three steps:

Typical example: You want to calculate the path of an arrow and map its position to a position and momentum variable in sapcetime with time evolution embedded in Newtonian laws. You do some math manipulations and get, say, the coordinates describing the impact point of your arrow. You conclude from these coordinates (which are numbers) where the arrow will hit (which is a real positon and someone might go ouch).

The problematic bit about your question is that it asks about a way to intuitively understand some math without stating from which physical theory the math should come from. When you talk about apples squared and adding apples and bananas, you are implying there is some canonical (standard) way to incorporate a measurement quantity like "apple" into existing theories of physics. But that isn't the case. You are at liberty to define what you would consider the unit of apple to be in your model.

This isn't meant to say that the statement "You can't add apples and bananas" is wrong. Understood in the typical intuitive way, it is quite right. It just goes to say that the connection between mathematical formalism and reality isn't "obvious" or that all alternatives must be arcane bullshit. The tuple-notation above is basically what any spreadsheet table does, and it is essential in bookkeeping.

That said, there is no physical reality to "apple$^2$" because there is no theory that fixes its meaning. This makes answering this question hard - you can define some sense in which the unit apple can mean something, as Agnius Vasiliauskas did by using apple as a (possibly anisotropic) length unit, just like the size of some bishop's feet were used as a length unit in the middle ages. But that isn't the "counting" unit for apples. As others already pointed out, there are situations where a squared quantity has a clear-cut meaning. That often comes from proportionality concepts. The mass squared appears in gravitational laws because doubling either of the masses will double the strength of the force. And doubling the distance will cut the force by four. If you were to change the measurement units, then the numbers in front of them would have to change, too. In that way, when we leave the units in the equation, we have an intuitive and straightforward way to calculate how the numbers change if we apply a different unit convention.

The thing missing from the units given in examples (m, C, etc) in multiple dimensions is a qualifier of which dimension. For example, when we identify an area and give it a unit, say $m^2$, we really mean $m$ in direction x times $m$ in direction perpendicular to x. When we say $C^2$ (Coulomb), we mean $C$ of one entity times $C$ of a different entity. These important qualifiers ("of one entity" and "of a different entity") disappear - become implicit - when we multiply the quantities and assign units.

We can, of course, have $C^2$ refer to the same apparent entity, like the nucleus of an atom (e.g. $Z^2$), but, really, terms like these still imply separate charges existing within the nucleus, or sometimes the charge of an electron interacting with the charge of a nucleus, or sometimes just are indirect but convenient references by proportionality to the surface area, volume, or various symmetries of nuclear constituents (https://en.wikipedia.org/wiki/Semi-empirical_mass_formula).

The reason we don't keep these qualifiers of units or, in the case of numbering objects, units themselves, is mere convenience; however, when performing dimensional analysis, it may be extremely important to keep the qualifiers so as not to mistake a green apple for a red. A perfectly precise description would include the unit apple, and for that matter which apple. Just as we accept that frequency has a unit $s^{-1}$ and leave it to the reader to understand that we really mean $\frac{\text{cycles of whatever wave we're discussing}}{s}$.

If $apple$ is a valid unit then $apple^2$ is also a valid unit. Simply because it is valid does not imply that it is meaningful.

Whether or not a unit is meaningful has to do with whether it is used in any physical formulas. I don’t know of any formulas that involve the unit $apple$, nor any that take products of quantities measured in $apples$. So to my knowledge it is not meaningful.

If there were such a formula then the meaning of the unit $apple^2$ would be as a reference standard for the quantity described by the corresponding variable in the formula.

You cannot talk about the meaning of a unit in the absence of a physical formula using that unit. For example the unit $\text{kg m}^2 \text{ s}^{-2}$ means different things in different contexts.

Not the answer you're looking for? Browse other questions tagged units dimensional-analysis or ask your own question.

8
Addition of different physical quantities
2
Differences between 3 apples and 3 kg of apples according to base units
1
Units for dimensionless quantities
0
What allows us to treat physical units in algebra?
2
Multiplication of units
0
Significant figures in multiplication with units
36
Is Nm the same unit of torque as mN?