What is the intuition behind why $\vec{E} = \int \mathrm{d}\vec{E}$ works for summing up infinitesimal contributions of electric field?

Say you want to find the electric field, $\vec{E}$, at some point in space, $P$, which is induced by some uniformly charged rod, $Q$, of known length, $L$. What you would do is break this charged rod up into infinitesimally small portions of charge $\mathrm{d}q$, and sum up the infinite number of the infinitesimally small electric field contributions at point P induced by $\mathrm{d}q$.

Where my confusion lies is in the intuition behind this integral. I can make sense of the problem stated above by instead doing something like this where is sum all of the infinitely many infinitesimal electric field contributions

where $r$ is a function of $x$ with $x$ representing the position of $\Delta q$ along the rod.

I can then recognize how that this is a Riemann sum, and convert it to an integral to solve the question.

With this method, I am able to easily conceptualize and understand what is happening when I arrive at the integral; however with $\vec{E} = \displaystyle\int_{a}^{b} \mathrm{d}\vec{E}$ I don't maintain the same level of intuition. What I see is that for some reason we are finding the area under a dimensionless curve f(x) (of the form $F(x) = \displaystyle\int f(x) \mathrm{d}x$), and for some reason this area equals the total electric field.

I fully understand whats going on when I think of it as a discrete sum of small electric fields, but I am unable to maintain the same level of intuition when thinking about it as a discrete integral where we are summing infinitesimal vector areas? What is this invisible $f(x) = 1$? What does the area under a constant function have to do with summing up infinitesimal vectors?

If I say now that your vector integral is actually sum of three different scalar integrals, would you agree? 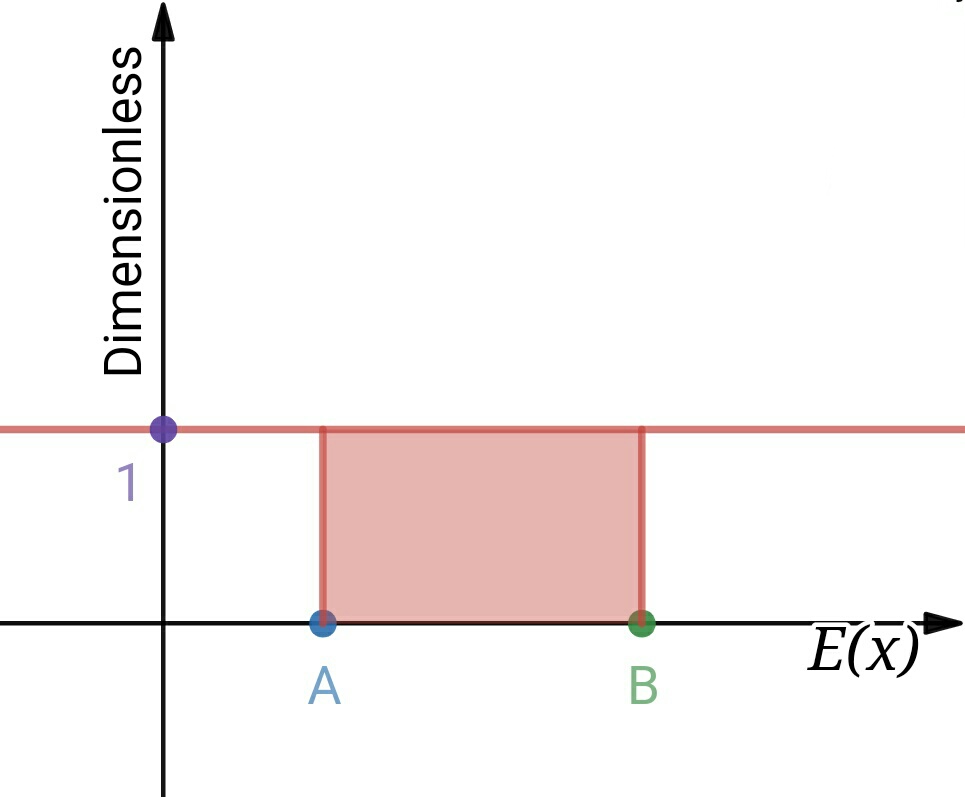 Now take a look at the graph of $\int_{\small A}^{\small B} 1\times {\rm d} E_x$, where I've assumed $A$ and $B$ be the magnitudes of electric fields in the $+^{ve} \space x$ direction due to infinitesimally small elements of rod taken near points $a$ and $b$ respectively.

And if you take for granted, that there is no field in absence of the rod (which logically do makes sense), we would arrive at a place where $$\Delta \vec E = \vec E$$

What I think from your comments is that you have understood why this integral $\int_a^b {\rm d}\vec E$ represents $\vec E$, but are unable to follow up with how this represents what it does. So here it goes,

Once you have successfully written a vector $\vec A$ in terms of its components in mutually perpendicular directions (say x, y and z), you arrive at

This is because of independency of vector components along mutually perpendicular directions. Also, you must keep in mind that component of a vector along any direction is a scalar quantity. They are magnitudes. And the unit vectors are just constants whose presence in any way do not interfere with the calculation of magnitudes in that particular direction. But to avoid any confusion, let's leave them alone.

Don't you think the above written three integrals are nothing more than just an abridged from of the Fundamental theorem of Calculus?

About the constant function 1

Mathematics gives you power so that you can write any scalar quantity, say $B$ as $$B= \beta \space (some \space units)$$ Where $\beta$ is numerical magnitude and is accompanied by the units specifying what quantity it is and in what scale it is measured. Similarly, any vector $\vec A$ can be represented as $$\vec A= \vec\alpha \space (some \space units)$$ Where $\vec\alpha$ is a dimensionless vector which says how large is $\vec A$ and is pointing in which specific direction and is accompanied by some units specifying what quantity it is and in which scale is it measured. So, our scalar integral (say of x component) converts to

We can clearly see that, "1" has no physical significance but it's presence could mathematically be justified and explained. It holds an importance in graphical representation of Riemann integral but is devoid of any importance in the physical aspects of integration. Even in graphical representation, it is there to formulate a dimensionless unitary area whose sum would yield the required Riemannian sum.

In simple words, the number "1" exists there as the universal factor and would keep on existing whether we like it or not. 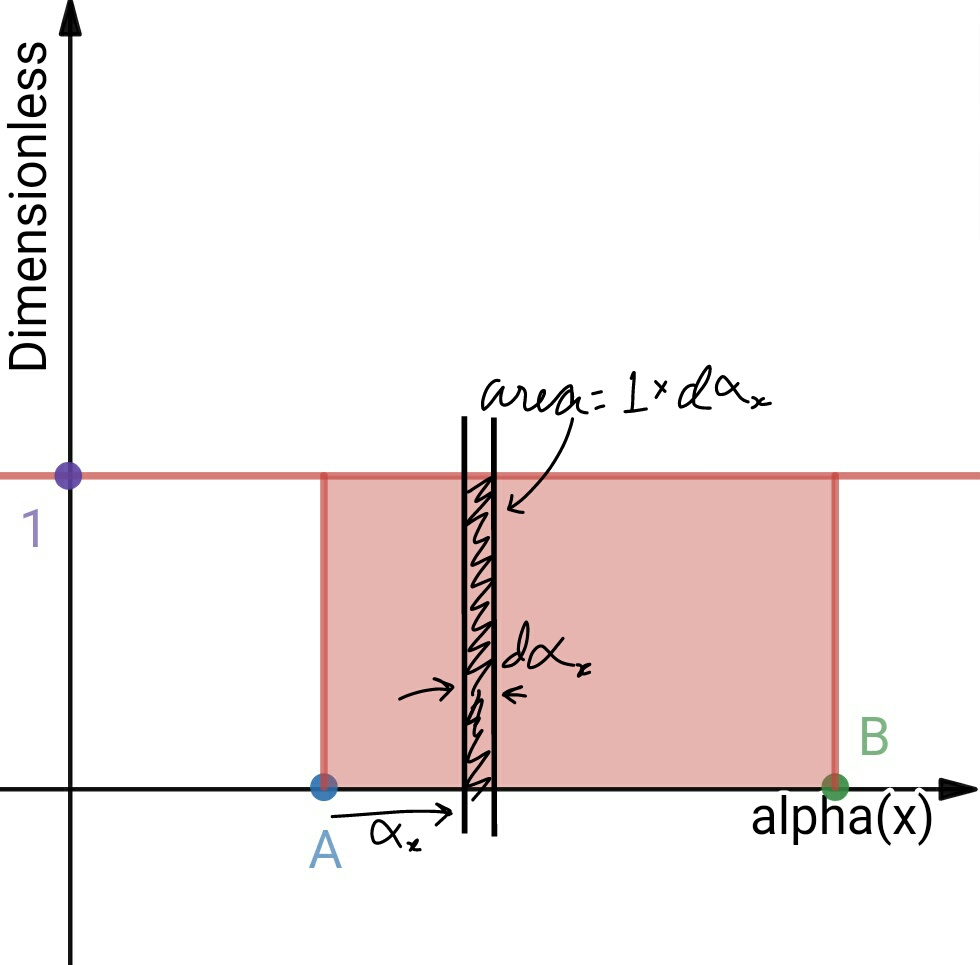 Note: In the above graph, both the axes have quantities that are dimensionless.

Not the answer you're looking for? Browse other questions tagged electromagnetism electrostatics electric-fields integration coulombs-law or ask your own question.

6
Understanding the differential in integrals

5
Deduction of $\mathbf H =\dfrac{\mathbf B}{\mu_0}-\mathbf M$
4
Gauss's law for conducting sphere and uniformly charged insulating sphere
0
Writing an expression for the scalar value of the electric field $E$
0
Find electric field $\vec{E}$ on the axis of a uniformly polarized cylinder
0
Equation of infinitesimal ring when finding $ \vec{E}$ of a disc?