I'm working on a problem from YK Lim's "Problems and Solutions on Mechanics". It is Problem 1016. Here is the statement of the problem:

A mass $m$ moves in a circle on a smooth horizontal plane with velocity $v_0$ at a radius $R_0$. The mass is attached to a string which passes through a smooth hole in the plane.

a) - c) are no problem. But d) befuddles me, because I see two plausible arguments that lead to contradictory results.

First, there is conservation of angular momentum, which tells me that as $m$'s 'orbital radius' gets smaller, its velocity has to get bigger, and therefore its kinetic energy gets bigger.

Second, there is the work-energy theorem, which tells me that for there to be a change in kinetic energy, there must be a force applied in the direction of displacement. But that is obviously not the case here. The only force is the tension in the string, which always acts orthogonally to the displacement. Therefore the velocity doesn't change, therefore the kinetic energy doesn't change.

My hunch here is that I'm misunderstanding the work-energy theorem, i.e. how or even whether it applies in this case. Perhaps it is that the work-energy theorem says that work done by a force leads to changes in kinetic energy, but it's not necessarily true that a change in kinetic energy was brought about by work done by a force?

EDIT: I foolishly left out part e) of the problem in my initial post, but have now edited to include it.

The author's solution to e) states:

The only force is the tension in the string, which always acts orthogonally to the displacement.

Angular momentum is conserved, work is done, and KE increases.

I'm adding this answer in support of the answer by Dale. 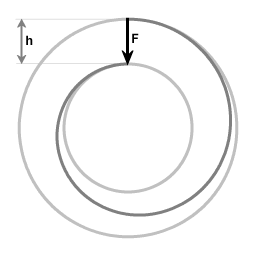 The same logic applies in the case of a centripetal force doing work. If you make the inward spiral twice as gradual then the overall process takes twice as long to complete; in the end the centripetal force has done the same amount of work.


Incidentally, for the force profile you can use an easing function.

A ramp doesn't need to have a constant inclination, it can be any profile. Only the height difference counts.

An inward spiral can have any profile, the work done by the centripetal force is independent of the shape of the spiral. You can make it a wild ride; it makes no difference. Of course, as you mention: you do need to avoid that there is a residual radial velocity. As you approach the desired final radial distance you need to ease into circular motion.

Not the answer you're looking for? Browse other questions tagged homework-and-exercises rotational-dynamics work or ask your own question.

0
Why do we not consider tension force to calculate work?
1
Conservation of Angular momentum or Work = 0 , which is valid?
0
Conservation of momentum and work
3
How can I make sense of the work-energy theorem in the situation of a force applied on a disk?
3
Angular velocity: why does decreasing the radius affect the tangential velocity?