What makes an electron jump down to lower energy level?

While I can easily grasp the mechanism of energy absorption by the atom system resulting in a jump of the electron to a higher energy level, i.e. receiving energy from the outside in the form of a photon, I cannot really understand why would an electron be interested, or be compelled to go back to lowest energy level available resulting in the emission of a photon ?!? Which mechanisms are behind the scene for this to happen? I came across a lot of explanations stating that "that's just the way electron like to be" :/ It's like saying that rain falls back down because water at the like to go back to the oceans. Many thanks

In this case the excited atom/electron system transitions to a lower energy level, while emitting a photon. This form of emission is mainly a QM phenomenon, and you are asking why it happens. In this case, the answer is quantum mechanics itself, a trigger for the process can only be understood with the explanations in QED and vacuum fluctuations.

Spontaneous emission in free space depends upon vacuum fluctuations to get started.[7][8]

In this case, an incoming photon of a specific frequency can interact with the electron/atom system, and cause it to transfer to a lower energy level.

The liberated energy transfers to the electromagnetic field, creating a new photon with a phase, frequency, polarization, and direction of travel that are all identical to the photons of the incident wave. This is in contrast to spontaneous emission, which occurs at random intervals without regard to the ambient electromagnetic field.

It is very important to understand that I mentioned everywhere a photon emission but there are mainly two types of such processes, radiative and non-radiative transitions. In the case of the latter no photon is emitted. 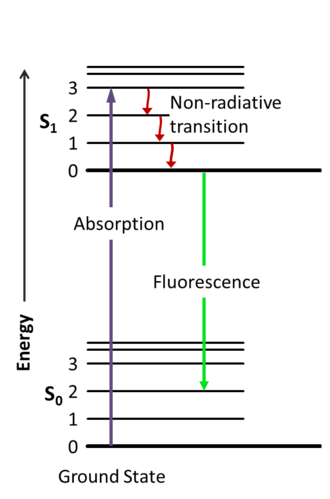 Just a note, there are other forms of transitions, like fine and hyperfine transitions too.

Before going to the quantized atomic levels, consider that in classical physics there is the Minimum total potential energy principle

A rolling ball will end up stationary at the bottom of a hill, the point of minimum potential energy. The reason is that as it rolls downward under the influence of gravity, friction produced by its motion transfers energy in the form of heat of the surroundings with an attendant increase in entropy.

Principles have the strength of axioms in the theories of physics, they are imposed because then the mathematical theories fit the observations and are predictive of new ones..

This principle is carried over in the case where quantization is imposed, so that the electrons around the nucleus instead of following the principle of minimum energy and ending up neutralizing the nucleus, they stay in stable orbits allowing for atoms and solids to form. If a lower orbital is empty, the principle forces the decay to that orbital, within the probabilistic rules of quantum mechanics, as long as there is a way for the extra energy to be dissipated, and that is the emission of a photon.

A free proton and free electron will tend to combine to form the lowest energy state (the ground state) of a hydrogen atom, the most stable configuration. This is because that state's energy is 13.6 electron volts (eV) lower than when the two particles separated by an infinite distance. The dissipation in this system takes the form of spontaneous emission of electromagnetic radiation, which increases the entropy of the surroundings.

The falling to the lower level for electrions in an atom. is due to sponaneous emission. One can think of it as being due to the infuence on the excited state of zero-point-energy vacuum fluctuations in the electromagetic field. The necessary existence of spontaneous emission was deduced in form of A and B coefficients by Einstein in 1916 --- long before the idea of quantum fields or even zero point energy was about.

Why does an electron drop to a lower energy level? Why questions are often outside the scope of physics. Physics says how the universe behaves, not why it does so.

But sometimes you can say why. Sometimes a law is derived from a simpler law. Why does the complex law work? Because it is a consequence of the simpler law. It still might leave you wondering why the simpler law is true. Or you might be so used to the simpler law that it feels satisfactory. The simplest laws are justified by agreement with experiments.

In this case, we can start with a classical electron being attracted to a proton. Protons exert an attractive force on electrons. This is the simpler law that I cannot explain further. (Quantum mechanical explanations for the attraction do exist. But you will get to a point where you cannot explain why quantum mechanics works. It just agrees with experiments.)

The proton has an electric field around it. You can define more complex laws: The forces on an electron depend only on its position.

From the properties of forces, you find that $PE + KE$ is conserved.

The same type of argument can be made for quantum mechanical electrons and protons, but it is harder. It is easier and more natural to work directly with energy. This is why physicists tend to work with energy and think that moving to lower energy is the simplest law.

A quantum mechanical electron is not a point particle. It has no single position, so you can't say that a single value of force is acting on it. It has no trajectory. So you can't integrate $F \cdot d$ over the trajectory to get $PE$.

But it does have a wave function. There is a time evolution operator that you can use to calculate the wave function at future times. You can calculate probable position distributions from wave functions. From this you can show that electrons tend to move toward protons.

You can also show that the uncertainty principle keeps them from getting too close. An electron that is very close to a proton has a small uncertainty of position. Therefor it has a high uncertainty of momentum. An electron that may have a high momentum isn't very likely to stay near a proton. Orbitals are stable configurations where there is a balance between these two tendencies to be attracted and move away.

Not the answer you're looking for? Browse other questions tagged energy photons electrons or ask your own question.

7
By what mechanism is a photon emitted or absorbed in atomic electron state transitions?
1
Do atom absorption lines disappear after being hit by photon?
1
A question on the emission spectrum and absorption spectrum
7
How does stimulated emission work, exactly?
4
Is it possible to combine two photons of different energies to get a single photon of a higher (combined) energy?
0
How do the electrons absorb energy in an discharge tube that is used for produce an emission spectrum?