Parity and the Dipole Operator for a Two-Level System

I attempt to understand the parity and dipole operator from Daniel Steck's notes: Quantum and Atom Optics (page no. 152, section 5.1.1). I have also attached a screenshot at the end of the question.

At the beginning of the section 5.1.1, the author defines the parity operator and derives some basic properties. Based on the fact that the parity operator commutes with a Hamiltonian with an even potential function: $$ \left[\Pi, \frac{p_e^2}{2m_e} - \frac{\alpha}{\left\vert \textbf{r}_e\right\vert}\right] = 0,$$ he eventually states that the diagonal matrix elements of dipole operator $\textbf{d} = -e \textbf{r}_e$ vanish, where $\textbf{r}_e$ is the atomic electron position: $$\langle g | \textbf{d} | g \rangle = \langle e | \textbf{d} | e\rangle = 0.$$ 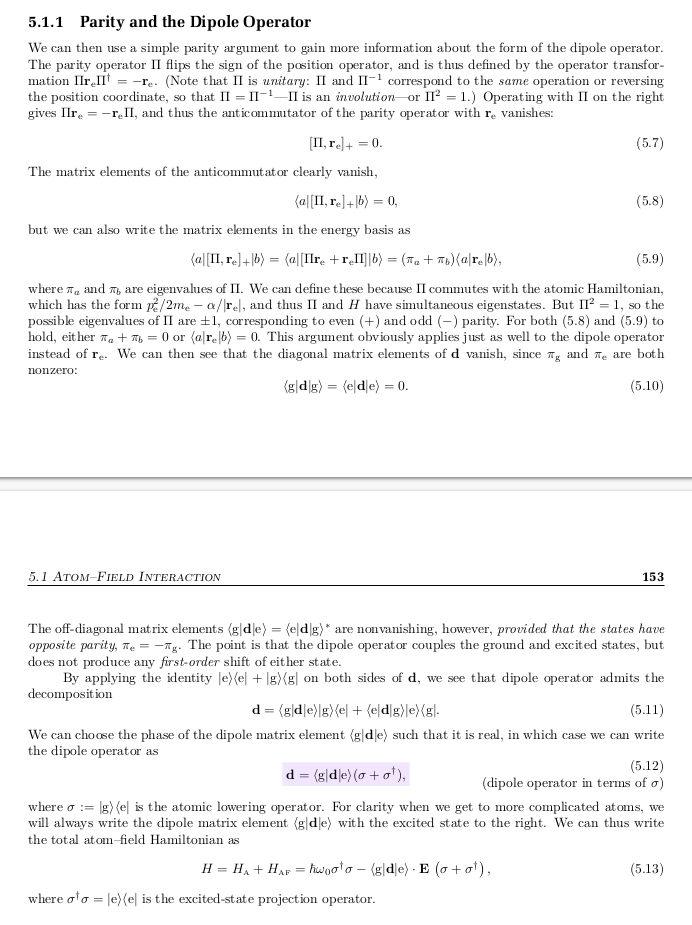 Answer to the First Question

Answer to the Second Question

Here author applies the results to $H_A$, not to $H$. Note that $H_A$ has eigenstates $|g\rangle$ and $|e\rangle$ and it commutes with the parity operator $\Pi$.

Not the answer you're looking for? Browse other questions tagged quantum-mechanics atomic-physics dipole-moment two-level-system or ask your own question.

0
Interaction of two-level system with radiation
4
Obtaining equations of motion for a three-level atom and plasmon system
0
Atom-field interaction for two level system: decomposition of the dipole moment on $|0\rangle$ and $|1\rangle$
1
Does the dipole moment of an atom modelled as a two level system depends on its frequency?
2
Components of Electric Quadrupole Oscillator Strength
3
How is the two-level atom dipole force modified for a real, multi-level atom?
1
Unitary operator acting to transform Hamiltonian