Can Liouville's theorem describe the passage from nonequilibrium to equilibrium?

Liouville's theorem describes a nonequilibrium systems when $\frac{\partial\rho}{\partial t}\neq 0$. But doesn't the derivation of Liouville's equation assume a fixed number of points in the phase space for all times? If so, can it not describe the passage or approach of a system from nonequilibrium to equilibrium?

What is the resolution?

The fact that Liouville's Theorem appears to contradict the increase in entropy with time was one of the objections to the statistical mechanical definition of entropy when it was proposed by Boltzmann. Liouville's Theorem appears to state that the Boltzmann entropy of a system can never change—whereas the Second Law of Thermodynamics says only that $S$ can never decrease, and $S$ is certainly observed to increase in practice. There were simpler ways of formulating objections to Boltzmann's development—such as the observation that reversible microscopic dynamics did not seem capable of producing irreversible increases in entropy—but the explanations are all related. Ultimately, a full understanding of how to address all the objections did not come until the middle of the twentieth century.

The right way to think about Liouville's Theorem is to realize that, at the microscopic level, it is true that the volume of phase space occupied by a system really never does change under Hamiltonian dynamics. However, for a thermodynamically large system (with macroscopically many degrees of freedom $N$), the shape of the phase space distribution becomes too complicated to track accurately. Even if you start with a fairly simple shape for the initial $\rho$ distribution, the complicated $N$-fold dynamics will quickly warp the shape into a complicated fractal.

So if you start with a a simple compact box as your $\rho(t=0)$, after just a couple collision times, it will evolve into something like this.* 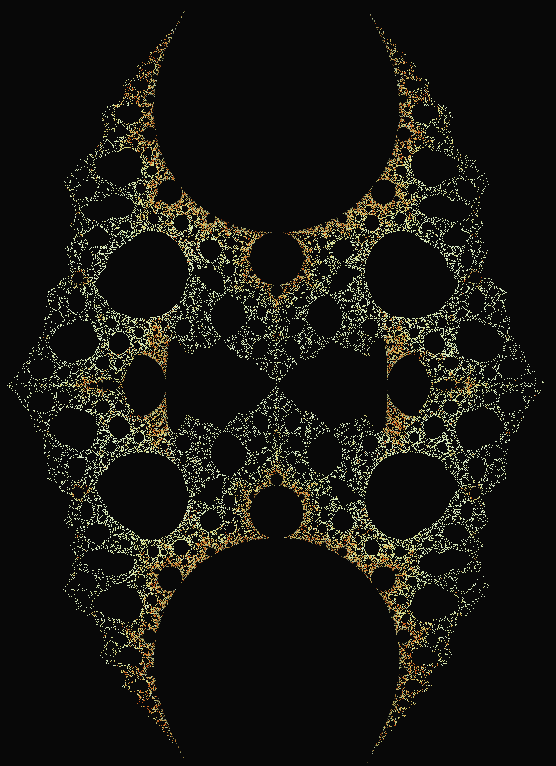 The colored areas now represent the occupied region of phase space. Their total volume is still equal to the initial volume, but it is much more spread out. If we wait a bit longer, $\rho(t)$ will develop into an intricate lacework filling the whole allowed volume. If you look at very small scale, the volume is unchanged, but if we only have the ability to make coarse-grained observations, the distribution has become essentially indistinguishable from a completely uniform one filling the entire allowed volume (a state of the maximum possible entropy—that is, an equilibrium distribution).

What this means for, in particular, particles in a gas is that if you let the gas evolve for a time, then measure the velocity of an individual particle, it will appear complete random—given by a Maxwell-Boltzmann distribution. However, there will still be a system of extremely complicated $N$-particle correlations among the velocities of the various particles. Normally though, it is impossible to measure these correlations; to do so, we would need to know the movement of every single particle in the gas. So the entropy has effectively increased, even though the microscopic phase space volume has not actually changed.

*I chose this particular image purely for illustrative purposes. The fractal shown was not generated by a Hamiltonian time evolution, but it can be used to illustrate the key points.

Not the answer you're looking for? Browse other questions tagged statistical-mechanics equilibrium phase-space non-equilibrium or ask your own question.

8
Is it possible to derive Liouville's Theorem purely from maximum differential entropy?
1
Question about ergodicity and the evolution of the probability distribution under Liouville's theorem
0
Temperature from the Gibbs entropy
2
Does the postulate of equal a priori probability apply only to equilibrium states or to all states satisfying the constraints?
1
Problem with microstates and corresponding volume in the phase space