Or someone knows where are the values of $\Omega$ measured with supernovae?

Being model-independent, other than assuming $\Omega_k=0$ (zero curvature of the universe), supernovae measurement of $H_0$ does not need the input of $\Omega_m$, $\Omega_r$, or $\Omega_{\Lambda}$.

The Jury is still out. And it's an opportune time to be a cosmologist now, since historically "cloud over physics" is a harbinger of phenomenal science breakthroughs.

There is an interesting Youtube video on the "The crisis in cosmology" (see here).

Supernovae observations at low redshifts can yield a value for $H_0$ that is insensitive to other cosmological parameters and independent of other methods. That isn't the case for the other main cosmological parameters, where joint constraints from multiple methods (including the CMB, baryon acoustic oscillations) are needed to get them with any precision.

Some very recent results can be found in the summary provided on behalf of the Dark Energy Survey (DES) by Abbott et al. (2019), which also contains many references to other sources of data.

"Supernova cosmology" works by comparing the apparent magnitude of Type Ia supernovae, which depends on their luminosity distance, with their redshift. The former depends on the present-day value of the Hubble parameter, but also on its history with redshift, and hence has some sensitivity to the cosmological parameters.

In the latter equation, $w$ is the equation of state parameter for dark energy. If we are dealing with a cosmological constant then $w=-1$. The above equations assume a flat universe and the results are sensitive to both $\Omega_M$ and $\Omega_\Lambda$.

More general formulations are also possible where flatness is not assumed and what is found is a degeneracy between $\Omega_M$ and $\Omega_\Lambda$. i.e. Supernovae observations alone do not yield both parameters simultaneously, they are most sensitive to the combination $\Omega_\Lambda - \Omega_M$. A typical plot of results is shown below (this one from the Supernova Cosmology Project, but all other surveys have produced plots with similar morphology). 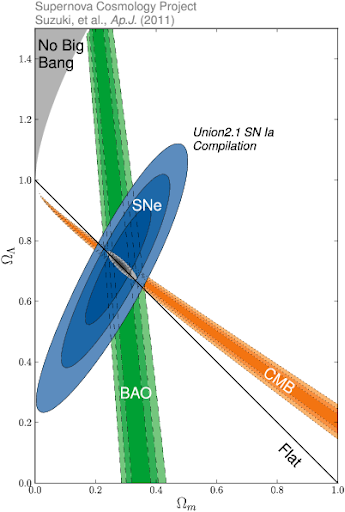 These plots, sometimes called "concordance plots" show that the cosmological parameters are actually given by simultaneous constraints by multiple cosmological observations. So whilst the CMB results alone strongly favour a flat universe, the supernova observations suggest that in order to be flat there must be some form of dark energy.

To get to your question. Observations of supernovae do not independently yield any cosmological parameters (with any precision) apart from $H_0$. The constraint on $H_0$ is obtained from the supernovae that are observed at low redshift, that sample the expansion that is in the local universe, but which are far enough away to be in the "Hubble flow". At low redshifts ($z<0.1$) then $H(z) \simeq H_0$, with only small corrections that depend on the cosmological parameters.

Not the answer you're looking for? Browse other questions tagged cosmology density or ask your own question.

0
Is there a standard distance/z data set for cosmology given new measurements?

2
How has the age of the Universe been derived from the observations made by the Planck mission?
1
Estimation of Location of First Acoustic Peak
2
Value of density parameters in CMB time
5
What is the meaning of Hubble tension?
1
Statistical significance of Hubble tension
5
What are the current theoretical solutions to the Hubble Tension?