Motion of an object near a force field

I'm trying to simulate the motion of an object near a force field, given an initial velocity $v_0$.

I couldn't find anything that fits what I'm trying to achieve.

The coordinate system is the Cartesian one.

The position of $M_1$ shouldn't change.

I figured out this:

But I didn't get further than that. How could I calculate the position of the body at time t? 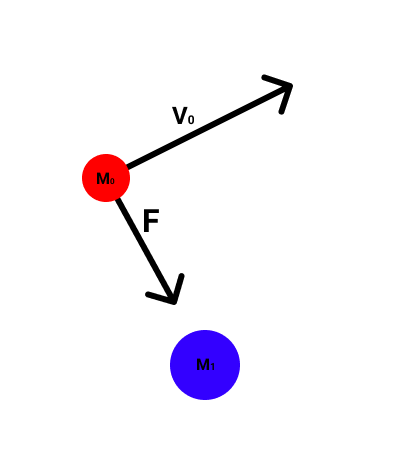 For the body with mass $m_0$, split the velocity and acceleration vectors into its perpendicular components. Let the body be at position $(a,b)$ initially. The displacement due to the initial velocity will be $s=vt$. Do the same for the acceleration using the formula $s=\frac 12at^2$. Add them together for the x-components and y-components and you arrive at your answer.

Not the answer you're looking for? Browse other questions tagged homework-and-exercises newtonian-mechanics forces newtonian-gravity kinematics or ask your own question.

0
How to predict the location of a planet at a given time?

3
What causes a car's velocity to follow the front wheels' direction?
3
Friction simulation in case of body moving with constant velocity and no external force
0
How are living things able to exert force on themselves?
1
Central Force Motion
14
Are the basins of attraction of two static gravitational sources two half-planes?
1
Simple equation for repulsion force on a bounded interval