How is a function approximated by Fourier analysis?

When trying to approximate a periodic function by Fourier series (say a rectangular wave), it is possible to increase the number of terms until the approximation seems good enough for our ends.

But Fourier analysis aims to approximate also functions limited to a finite range. The underlying idea is to use the destructive interference of the harmonic functions to get zero out of that range.

Suppose I know $f(p)$, and want to evaluate numerically, (because the integrand is not analytically solvable), the Fourier transform to get $f(x)$.

I can proceed as in Fourier series, choosing an interval, splitting $f(p)$ in a series of coefficients that multiplies the exponentials, and adding all the parts.

But when I go that way, what I get is always a periodic function, what I know it is not the case.

Is there other way to have progressively better estimates as it happens in Fourier series (or Taylor expansions)?

But, as you already noticed, with a Fourier series you cannot build aperiodic functions (e.g. functions limited to a finite range). For approximating such functions you need a Fourier integral, i.e. summing harmonic oscillations with all frequencies from $0$ to $\infty$. $$f(t)=\int_{-\infty}^{+\infty}F(\omega)e^{i\omega t}\ d\omega$$

$f(t)$ is a perfectly periodic function, and therefore can be decomposed into a Fourier series. Its spectrum (the Fourier coefficients $F_n$) look like this: 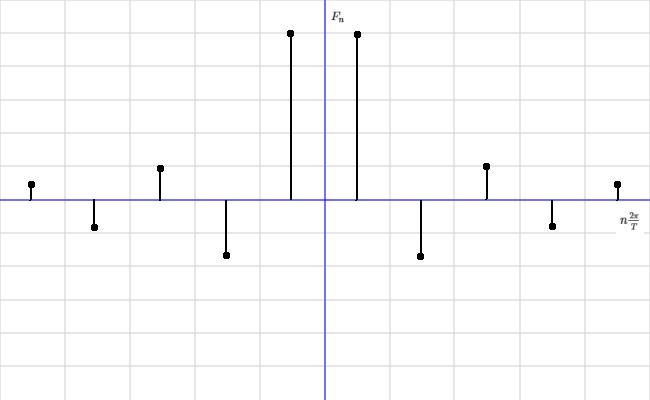 Now as a second example for $f(t)$ let's choose the rectangular wave (again with period $T$) restricted to a certain range. Outside this range we define $f(t)=0$. 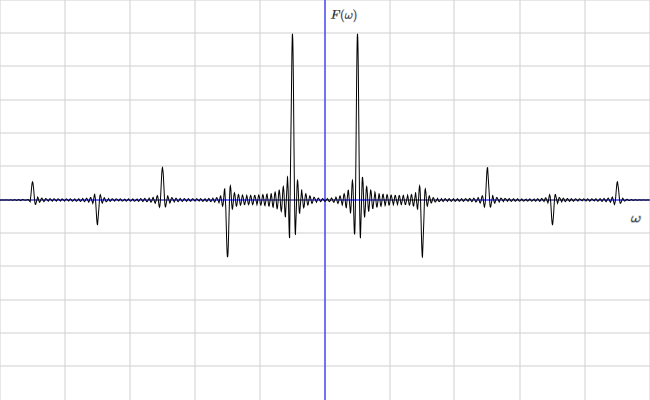 This spectrum is continuous, but still quite similar to the discrete spectrum of the first eample. It has some pronounced peaks (at the same frequencies as in the first example). But there is also some spectral intensity outside of these peaks.

Not the answer you're looking for? Browse other questions tagged field-theory computational-physics fourier-transform mathematics approximations or ask your own question.