Are there two ways of representing a vector i.e., parrallelogram and resolution?

The component of a vector is

(a) Always less than its magnitude

(b) Always greater than its magnitude

(c) Always equal to its magnitude

(d) None of these

according to me ans will be none of these because

but my teacher told me:

The component of a vector may be less than, greater than or equal to its magnitude.

on asking he showed me this :

my question is : can a vector have components in any set of two directions you choose that may not be mutually perpendicular. ?

. . . . can a vector have components in any set of two directions you choose that may not be mutually perpendicular. ?

Perhaps an example will help? 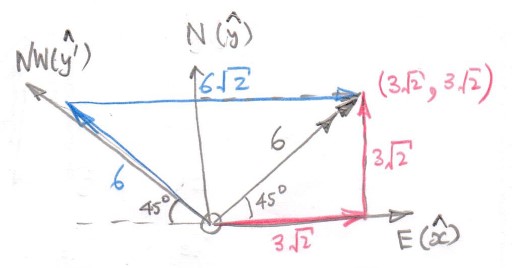 Of course vector can be decomposed into any set of two directions chosen arbitrary. That's the basis of vector algebra. Mutually perpendicular components exists only in Euclidean space which is sub-set of more general vector representation rule.

Not the answer you're looking for? Browse other questions tagged homework-and-exercises vectors geometry or ask your own question.

2
How do I split a vector into components parallel and perpendicular to a known line?
0
Why is parallel component of velocity along position vector considered rate of change of position?
1
Applying Biot-Savart to a circular loop along central axis
1
Components of a Vector in Spherical System
5
When does a vector component keep being a vector, exactly?
0
Determining the $z$-component of a force to maintain equilibrium?