Let us consider a conductor having a cavity (both can have an arbitrary shape) wherein a positive charge $+q\,$ is located: 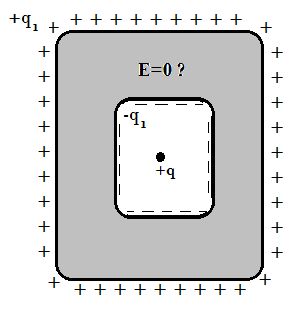 At the electrostatic equilibrium, the inner wall of the conductor will have a negative charge $-q_{1}$, and the outer wall a positive charge $q_{1}$.

The electrostatic equilibrium argument only tell us the potential is constant on the outer and inner surface of the conductor, it does not give any additional information about the $E$-field or the potential inside the thickness since there is no charges in it. Also, we cannot claim $q_{1}= q$, because, since we don't know the $E$-field within the layer, we cannot apply Gauss's law. How can we get out of this impasse?

It is important to realize that conductors inside contain mobile electrically charged particles, so called "charge carriers", even if the conductor is macroscopically neutral inside.

Since electrostatic equilibrium is assumed, there are no electric currents anywhere in the body or on its surface. In real conductors, the weakest macroscopic electric field inside the conductor means the mobile charge carriers present in the conductor (electrons in metals, or also holes in some semiconductors) experience electric force due to that electric field. If that was the only external force, it would make the mobile charge carriers move in concerted way and that means macroscopic electric current inside would occur.