What's wrong in my approach towards solving this problem?

This is the problem that I have to solve:

The figure shows a block $A$ of mass $6m$ having a smooth semicircular grove of radius $a$ placed on a smooth horizontal surface. A block $B$ of mass $m$ is released from a position in grove where its radius is horizontal. Find the speed of the bigger block when the smaller block reaches its bottommost position. 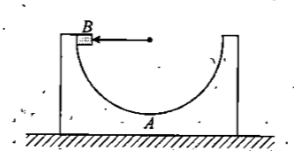 Now by applying work-energy theorem on the smaller block relative to the bigger block, we get

The correct answer given is $v_2 = \sqrt{\frac{ga}{21}} $. I don't know why my approach is wrong. Can anyone point out what is wrong? I think that I didn't include all the work done in the work-energy theorem as the reference frame of the bigger block is non-inertial.

The better approach is to use the table as the reference frame. Define $v_1$ and $v_2$ as the horizontal speeds of the small and big blocks respectively with respect to the table. In this case, the energy and momentum conservation consideration gives respectively, \begin{align} \frac{1}{2}m v_1^2 + \frac{1}{2}(6m)v_2^2 &= mga, \\ mv_1 &= 6mv_2, \end{align} where the first equation says that the gravitational potential is transformed to be the kinetic energies of the small and big block. Solving the equations, you will get the correct answer.

Not the answer you're looking for? Browse other questions tagged homework-and-exercises newtonian-mechanics momentum energy-conservation or ask your own question.