When looking for a black hole, will we always find a collapsing star instead?

Since this is true even for infalling observers getting arbitrarily close, does this imply that if we pick an object that we think of as a black hole originating from a star, and accelerate towards it with the intention of dropping into it, we will always see and hit the original star at a point where it is still larger than its Schwarzschild radius?

(If that is the case, how can we say that black holes "exist" in any meaningful sense other than as a mathematical limit?)

Since this is true even for infalling observers getting arbitrarily close...

Consider the Penrose diagram for a non-rotating black hole formed by a collapsing star in the context of classical general relativity: 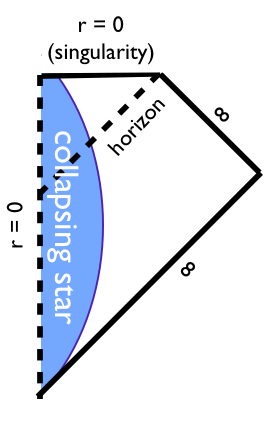 In this diagram, diagonal lines represent lightlike directions. (Beware that this diagram distorts lengths and time intervals in order to make all diagonal lines correspond to lightlike directions. Representing a 4-d curved spacetime on a 2-d flat space requires making compromises!) The diagonal dashed line is the event horizon, and the horizontal line at the top is the central signularity. The diagonal lines labelled $\infty$ are in the infinite past and future, respectively. (Technically, these represent lightlike past and future infinity. The point where they meet represents spacelike infinity.) The lines labelled $r=0$ represent the center of spherical symmetry: each point in the interior of the Penrose diagram represents a whole sphere centered on $r=0$. Dashed lines can be crossed; solid lines cannot.

Now, consider the diagrams below, each of which shows the top part of the preceding Penrose diagram:

we will always see and hit the original star at a point where it is still larger than its Schwarzschild radius?

Disclaimer: As mentioned near the top, this answer is based on classical general relativity. We know that classical GR isn't the final word, but we don't yet know exactly when/where/how it breaks down. These experiments with black holes have never been done, and nature is full of surprises!

Not the answer you're looking for? Browse other questions tagged general-relativity black-holes event-horizon observers or ask your own question.

2
What Would a White Hole Look Like?
1
What would you see dropping a sufficiently strong chain with substantial length into a black hole?
1
Can there exist an observer able to observe a collapse of a star into a black hole?