When do you see the second horizon as you fall into a black hole?

Suppose you are a massive observer falling into a Schwarzschild black hole (geodesically or not, it shouldn't matter). At any point on your personal worldline you can receive light signals from the past, which include light from your universe that you've just left behind (as described in this answer).

But if the black hole is actually part of a complete Kruskal manifold, then the black hole ("Region II" in the traditional Kruskal diagram) can also receive signals through another, second horizon that connects regions II and III. (Some people call this anti-horizon.)

How and when does the infalling, backwards looking observer see the second horizon? What puzzles me is that spacetime is regular everywhere away from the singularity, and so the observations along the infalling trajectory should be continuous. The sudden appearance of a second horizon seems like a discontinuity to me. Where is that second horizon, and what does it look like?

One thing to note is that this horizon would only be present in an idealized eternal black hole, for a realistic non-rotating black hole formed by a collapsing star the Kruskal-Szekeres diagram would look more like the right-hand diagram below (from Gravitation by Misner, Thorne and Wheeler), where the gray area represents the interior of the star and the diagonal line labeled r=2M, t=infinity represents the sole event horizon: 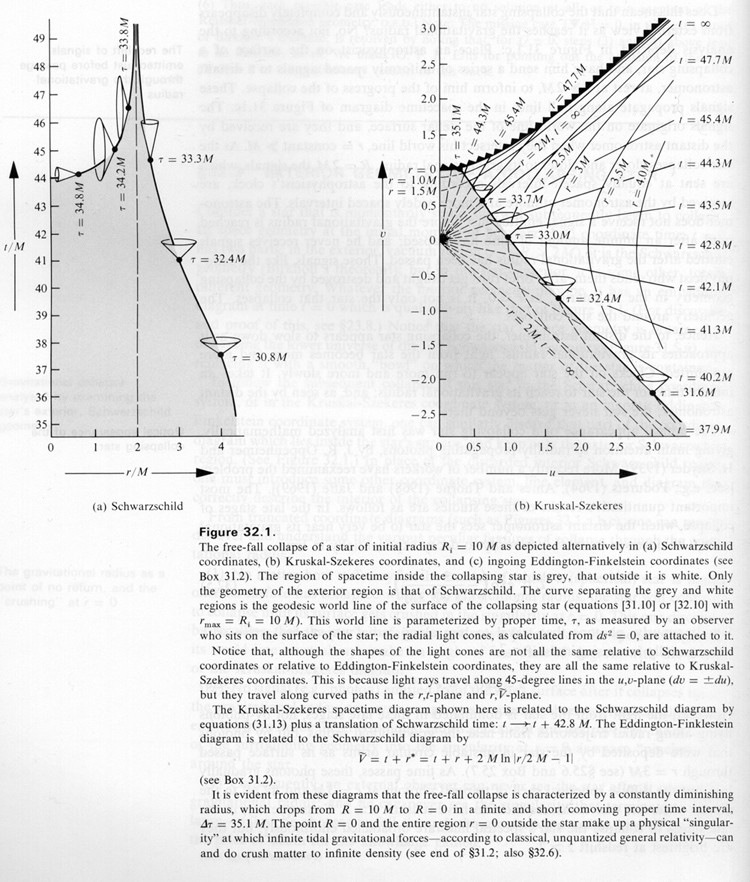 Andrew hamilton also has some animated images showing falls into a Schwarzschild black hole, with a red grid representing the visible position of the antihorizon, and a white grid representing the visible portion of the horizon. See the "Through the horizon" section on this page for an animation with fancier graphics, and this page for a simpler version. It's explained a little more clearly on the second page--the red grid representing the antihorizon always appears off at some distance ahead of them even after they cross the horizon, but at the moment they cross they get their first light from events on the horizon, and that light appears as a white dot on the graphic but "The white dot is actually a line which extends from us to the Schwarzschild surface still ahead, though we only ever see it as a dot, not as a line". Then after they cross, this line expands into an white ovoid "bubble" which appears to intersects the red antihorizon, with the observer appearing to be enclosed within it:

The Schwarzschild surface appears to split into two in a region around us. We seem to lie inside a bubble formed by the two surfaces. Looking outward, we see the Schwarzschild surface (white grid lines) we just passed through. If other observers fell through the surface after us, we could see them fall through here, and they would appear neither infinitely redshifted nor slowed.

Persons who appear to us to be inside the Schwarzschild bubble have passed inside the horizon of the black hole. If they are sufficiently close to us, then we can communicate with them, but they must be close, for there's not much time left before we hit the central singularity, not much time left for light signals to travel between us.

Then the white bubble of the horizon continued to grow as the observer approaches the singularity.

Not the answer you're looking for? Browse other questions tagged black-holes event-horizon or ask your own question.

11
How does an object falling into a plain Schwarschild black hole appear from near the black hole?
8
Falling into a black hole
3
Infalling light signals seen by a free falling observer
5
Does the maximally-extended Schwarzschild horizon see the entire past of the parallel universe?
9
How can information ever get lost at the event horizon of a black hole?
4
What's the proper distance from the event horizon to the singularity?
1
Spacetime inside the horizon of a black hole
3
How can I make sense of black hole complementarity if the universe consist of one manifold and observers are not married to coordinates?