There is a well known black hole analogy which considers a bathtub filled with water. It seems to me that the tub creates some kind of curvature in the water comparable to what a black hole does, sucking everything up at the center.

I've come across this video: How a bathtub drain is equivalent to a black hole. It seems to confirm my initial statement that the sink acts as some kind of black hole. In the video, tweezers were put in the tub creating streamlines in the water representing a 'light cone'. After passing a critical line close to the center of the sink, there isn't any line that escapes from the vortex meaning that there is no way out.

How is it possible that this simple analogy is so similar to the behavior of a black hole? Are there any equations proving this similarity?

Perhaps a simpler way to see the same thing is the so called "river analogy" or "waterfall analogy". As you can see in the picture below, a river flows with speed $v$ which increases downwards. A salmon travels upstream with fixed speed $c$: 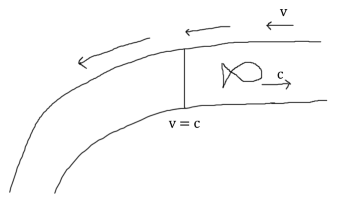 In the region with $v < c$ (where the salmon is now in the picture) the salmon can do whatever it wants. There is a point where the speed of the river equals that of the salmon, $v=c$: if the salmon ends up there it will get stuck and be unable to move. If it ends up in the region $v>c$ there's nothing it can do to avoid being dragged downwards.

In this analogy the salmon is a photon, the point $v=c$ is the event horizon and the lower region where $v>c$ is the inside of the black hole. In fact if the salmon is stuck at $v=c$ and you happen to be travelling towards it, in your reference frame you'll see the salmon coming towards you at speed $c$. This is exactly what happens in a black hole.

The intuitive reason why this happens is that the universe has a speed limit, which is the speed of light. In fact if the salmon was capable of accelerating to higher speeds it could free itself from $v=c$; and another salmon travelling at $c' > c$ would see a different event horizon at $v=c'$, but $v=c$ would not be a special surface for it. The event horizon is the same for everyone because no one can go faster than light. In fact in a purely Newtonian universe (in which there is no speed limit) there are no black holes in this sense: light rays could come out of the black hole, but then they'd have to turn around and fall back in. This is impossible in relativistic black holes and impossible in the river analogy. In a newtonian black hole you could in principle jump out, then start accelerating and free yourself.

The formal reason why the analogy works is that one can write the Schwarzschild black hole metric in Painlevé-Gullstrand coordinates: $$ds^2 = -dT^2+(dr+\beta dT)^2 + r^2 (d\theta^2 + \sin^2{\theta} d\varphi^2)$$ where $\beta = \sqrt{2GM/r}$ is the newtonian escape velocity. This metric provides a simple picture for the black hole: it's just a flat space metric, but space flows radially inwards at the newtonian escape velocity. And this is basically why the analogy works. You can read more about it here.

It's interesting to note that this analogy is far-reaching. The wave equation in the river model turns out to be $\nabla^\alpha \nabla_\alpha \psi = 0$ where $\nabla$ is the covariant derivative obtained from the metric $$ds^2 = \frac{9}{c}[(c^2-v^2)dT^2 - 2v dx dT -dy^2 -dz^2]$$ which is a one-dimensional version of the Painlevé-Gullstrand metric. One can even obtain Hawking radiation in the river analogy! The two models are in fact kinematically the same (they have the same metric, so the equations of motion are the same), but they are dynamically different: one metric obeys the Einstein equations, while the other obeys Navier-Stokes.

Not the answer you're looking for? Browse other questions tagged general-relativity fluid-dynamics black-holes event-horizon home-experiment or ask your own question.

5
Black hole analog experiment?
0
Understanding Black hole information paradox?
8
Why water in the sink follow a curved path?
16
Are black holes really singularities?
28
Could the black hole in the center of the galaxy be a white hole?
0
Is this analogy of Hawking Radiation correct?
9
What is the region of space that exists at the center of mass of merging black holes?
0
Why the gravity of a black hole is so strong by the Bad Astronomer