I apologize that this is a not a normal post (i.e. not using MathJax but instead posting a video).

In this video (timestamped properly) the physics teacher claims that there is a magnetic force pointing leftwards due to the moving current in the right section of the circuit. However, as this current moves counter-clockwise around the loop, in practice all magnetic forces should cancel out. This is because the current going through the rightside of the loop also goes equally through the leftside of the loop but in opposite direction. As the opposite direction produces a negative cross product relative to the original magnetic force calculation, their equal magnitudes should cancel out through superposition.

Because of this cancellation, people use the righthand curl method to approximate the magnetic force direction of counter-clockwise current loops.

I am self-studying E&M and have been using this great youtuber, but this time I am in contradiction of his logic. Can someone offer knowledge to answer why his assumptions seem to produce accurate calculations in the subsequent minutes? 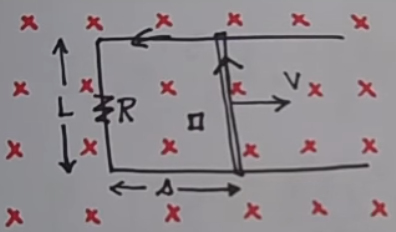 It is the external magnetic field out of the paper (red crosses) which is interacting with the magnetic field produced by the induced current moving upwards in the right hand conductor.

The magnetic field produced by the current passing through the left hand conductor and resistor $R$ will be so much weaker than the external field that it will not affect the force on the right hand conductor by very much at all.

Update as a result of a comment from @ebehr

In order to keep the right hand conductor moving at constant speed an external force, equal in magnitude and opposite in direction to the force due to the interaction of the external magnetic field and the induced current, must be applied to the right hand conductor.
This force could be you pushing the conductor to the right.
The work that that external force does (eg you) produces the induced current which results in the ohmic heating in the circuit.
So you are doing work (using chemical energy - food) to generate electrical energy which in turn is converted to heat.

I now grasp my confusion. The video author is correct that the movable wire feels a drag magnetic force, and by going against it converts mechanical energy into electrical energy in the form of an induced EMF. The drag force is $F_M=I\vec{B}x\vec{L}$. The work done to counteract this force adds energy to the system which does work on any charges inside of the conductor causing a current to flow.

I was indeed correct to realize that the loop formation of the circuit meant that that same current would be going in the opposite direction on the other side, producing a magnetic field and force of opposite direction but same magnitude. But, I was misaimed to believe that this should negate the first paragraph's assertions. Although there is a magnetic force on the left side of the conductor which will have a field that reaches the moving part of the conductor, the left side's field strength will not cancel much at all of the drag force on the right side. I must remember that the charges are moving so slow that they experience little magnetic force, and that this tiny magnetic force would become even smaller over distance.

0
Magnetic flux of a loop due to another loop
4
How to determine the direction of induced current flow?
7
What force causes the induced EMF of a loop? And, the difference between a loop EMF to motional EMF?
1
Concentric Circular Loops
1
Motional EMF and forces on negative charges
1
Current induced in loop moving out of magnetic field : contradiction using Fleming's right hand rule
0
Magnetic field generated pointing upwards, what direction is induced current?
0
Magnetic force on a triangular loop
0
Finding the induced current in a loop and force acting on the conductor
2
Confusion about induced emf vs motional emf