my doubt is pretty basic but it's complex enough for me not to move on with my studies: 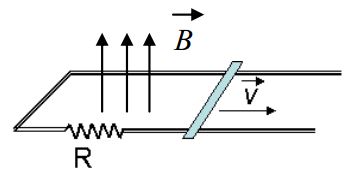 In this example (which is probably known from people who read Serway's book) there is an induced emf in a conductor due to the change in magnetic field and law of Faraday in the clockwise direction. Now the trouble comes when I have to deal with the direction of the magnetic force from Lorentz equation. Following the cross product rule, and aknowledging that the current is in the clockwise direction and the magnetic field is upwards, I get a force pointing to the left. BUT the Lorentz formula tells us that the sign of the charge carriers results in a change in direction, according to F=q(vxB) so the force would be pointing to the left with protons and to the right with electrons. But I am dealing with a conductor, so how is that possible??? Thank you

'Free' electrons (each with charge $-e)$ can move in metal conductors. They are the 'mobile charge carriers'.

If the only velocity of the free electrons in the rod were the velocity $\vec v$ of the rod itself, the force on each mobile electron would be $$\vec F=(-e)(\vec v \times \vec B)$$ This drives the electrons anticlockwise around the loop.

So the electrons now have another velocity, their drift velocity through the rod, $\vec v_{dr},$ added (vectorially of course) to the velocity, $\vec v,$ of the rod. This doesn't make things as complicated as you might fear. We can simply work out the additional Lorentz force that this additional velocity gives rise to: $$\vec F_{Lap}=(-e)(\vec v_{dr} \times \vec B)$$ This force is to the left, opposing the motion to the right of the rod. So we have to do mechanical work to move the rod, and this is how we pay for the energy dissipated in the resistor!

[A note – but not for the faint-hearted – on the weird designation, $\vec F_{Lap}.$ Because the electrons are confined to the rod by essentially electrostatic forces, the Lorentz force component, $\vec F_{Lap},$ is balanced by such a force, whose Newton 3 partner, a force equal to $\vec F_{Lap},$ is the electron's contribution to the sideways force on the rod itself. The sideways force on a current-carrying conductor in a magnetic field is called the Laplace force.]

Current caused by the motion of the positive charge carriers is a clockwise current.

Current caused by the motion of the negative charge carriers is a clockwise current.

Not the answer you're looking for? Browse other questions tagged electromagnetism magnetic-fields speed or ask your own question.