Why is the integration constant in a purely inductive AC circuit assumed to be zero?

While studying about AC circuits, I came across the usual differential equation of an AC circuit (in which the voltage across the source is a sinusoidal function of time) containing an inductor only.

This doesn't sound like a satisfactory reason to me. Can someone give a better reason than this?

Any help will be appreciated. 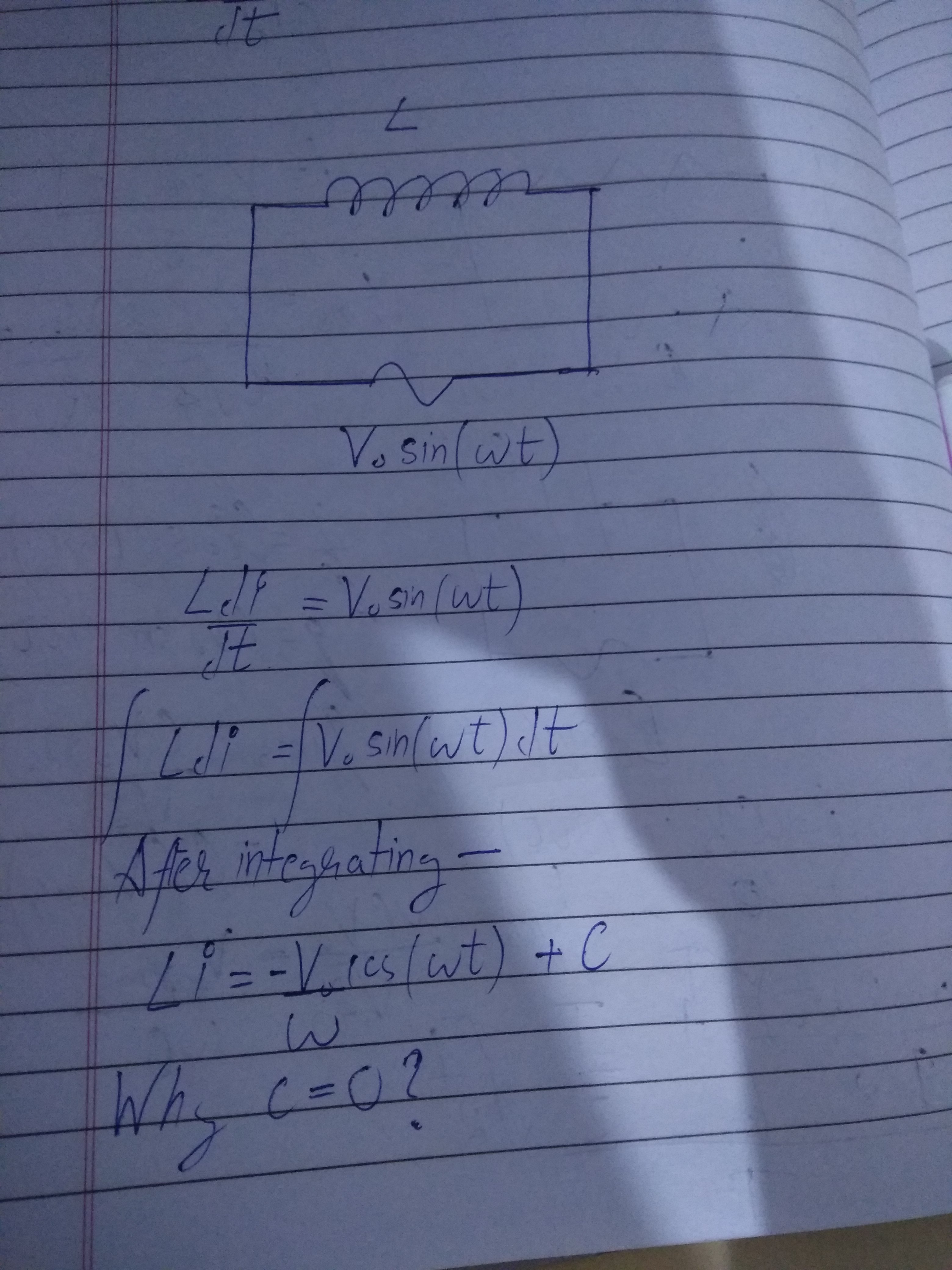 EDIT: I've got some really good answers in which many people pointed out that in reality the value of arbitrary constant doesn't matter because the circuit would have some resistance and after integration the solution would contain an exponentially decaying term multiplied by an arbitrary constant and that would decay out very quickly.

But unfortunately that still doesn't answers my question completely. Suppose i have an Inductance, a resistance and a source of AC with a fixed peak voltage and I connect them via a switch which I keep open. As soon as I close the switch there will be a current in the circuit, which will depend on that arbitrary constant of integration. I can measure the initial current and there should be a unique value of initial current for a given value of Inductance, Resistance, Frequency and Voltage of AC source, I want to get an expression that would PREDICT this initial current (and therefore should not include and arbitrary constant). What will be that expression?

In a problem like this, where there is no natural starting time for the analysis, we are usually looking for the behavior of the system after it has been operating for a "long time", and any initial stored energy has decayed away.

In a real circuit, if you started the system at some time $t_0$ with an initial current through the resistor, that current would decay away over time (realistically, within a few seconds at most) due to the resistance of the wires (which we're otherwise ignoring here).

Since there's nothing in the problem to say when the source was first applied or how long it has been running, and we know it didn't actually start in the distant past with an infinite initial current, we assume that in this problem $C=0$.

Probably one of the next things you'll study after this kind of problem is circuits that have switches in them that change the configuration at some instant in time, which gives us a natural point in time to define as $t=0$, and which will lead to nonzero constants of integration when they are analyzed.

You have set up a mathematical model of an ideal system and on solving the first order differential equation you get a result for the current which has one constant of integration.
You are quite correct that in theory that constant of integration can have any value but the book (author) now switches back to the real world and asks "what is the problem with assigning a non-zero value to the constant of integration?"
The simple answer is that this is a situation which will never happen because the circuit will always have resistance (and capacitance) no matter how small and even if there was an "extra" current equal to the integration constant at a certain time, that current would not persist and decay away over time.
As an example would you expect the current in the circuit to be $I(t) = 999.999+0.001 \cos (\omega\,t)$?
The mathematics says that it can but in the real world it cannot.

Advance your mathematical model one step and include relatively small amount of resistance $(\omega L \gg R)$ in the circuit with $I(0) = 0.1$.
Solve the differential equation and see what happens over time.
The solution will be in two parts with one part decaying over time and the other part being oscillatory with frequency $\omega$.

with the left-hand graph of current against time 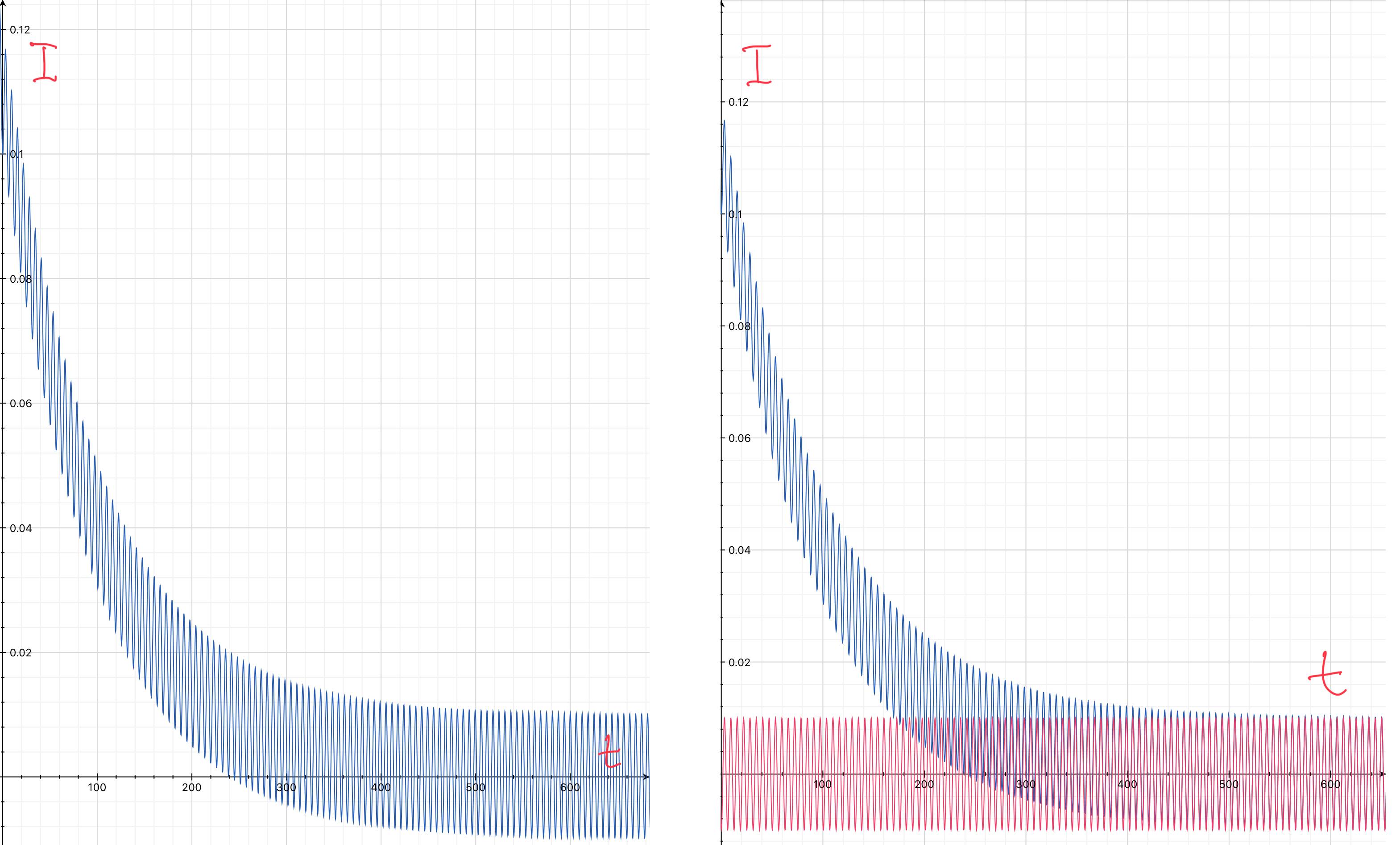 Here you can see the decay of the initial current of $0.1$ towards the approximately $-0.01\cos(\omega t)$ steady state behaviour.

Not the answer you're looking for? Browse other questions tagged electric-circuits inductance induction or ask your own question.

1
Does the heat produced in an inductor affected by the total current in the resistance in the circuit?
1
Does the phase difference between voltage and current in an LCR circuit exist throughout the circuit?
0
AC through a pure inductor
0
Current in purely LR DC circuit at t=0
6
If induced voltage (back-emf) is equal and opposite to applied voltage, what drives the current?
0
Why do inductors maintain the exact same current?
0
Inductor's back-emf vs voltage drop across resistor
0
RC circuits - what can we interpret when the voltage across the capacitor is equal to zero?
6
Confusion in understanding the behavior of inductor in RL circuit with DC source
0
Why to use non-inductive resistances in Callendar-Griffiths bridge?