When we have a DC voltage source with a switch in series with $RL$ and the switch is closed at $t=0$ then it is said that current is zero initially, but the voltage across inductor is same as that of applied voltage (according to Kirchhoff voltage law) so there should be current (according to $V=L(di/dt)$) but it contradicts the initial statement so how do I understand this?

I have gone through lot of questions on this site but couldn't find any answers regarding my confusion, I am stuck with this. Please help me with this.

When we have a DC voltage source with a switch in series with RL and the switch is closed at t=0 then it is said that current is zero initially, but the voltage across inductor is same as that of applied voltage( according to kirchhoff voltage law) so there should be current( according to v=L(di/dt) )but it contradicts the initial statement so how do I understand this?

...but addition of resistor makes the current increase exponential , how to understand this intuitively (I understand from the equations but not theoretically how it is happening)?

The current increases like $$i=i_0\left(1-e^{-t/\tau}\right)$$ So it is increasing, and there is an exponential function, but usually "increasing exponentially" means it keeps growing and growing more rapidly without bound. This is not what is happening here.

As the current in the circuit increases the voltage across the resistor increases. Therefore, the voltage across the inductor decreases. Based on our previous discussion, this means that the change in current must be decreasing. Hence this "voltage trade-off" happens at a slower and slower rate. This causes the current to approach a steady value where the increase over time decays exponentially.

Keep in mind that "oppose" does not mean "block".

It seems like your confusion stems from what we discussed initially. You are mixing up the current and its derivative. The voltage across the inductor tells you nothing about the current in general. It tells you how the current is changing.

I hope this answer is a good scaffold to hold up the deeper understanding you will develop here.

Correct, if there is zero series current at time $t=0$, then the voltage across the resistor is zero (Ohm's law) and so all of the applied voltage is across the inductor.

Not true, this equation fixes the time rate of change of the series current but not the value of the current. Indeed, if you solve for the series RL circuit current (without a switch), the solution is easily found to be

The voltage across the inductor is then

addition of resistor makes the current increase exponential , how to understand this intuitively

(2) Since there is a series resistor, if the inductor current increases, the inductor voltage must decrease (KVL)

@Aaron Stevens has given you an excellent answer on the electrical behavior of inductors. Since electricity is not always as intuitive as mechanics, students often find it helpful to learn electrical concepts using mechanical analogues. In the hope the following might help, I offer it to supplement Aaron's answer. But I need to caution you up front that the mechanical analogues are by no means exact.

You may be familiar with Newton's laws of motion.

Newtons second law can be expressed mathematically in several ways. One way is

The mathematical expression of Faraday's law is

Comparing the two, the analogues are

To end up with my initial caution about analogues.

There are mechanical analogues for resistors and capacitors as well as shown in the diagram below. 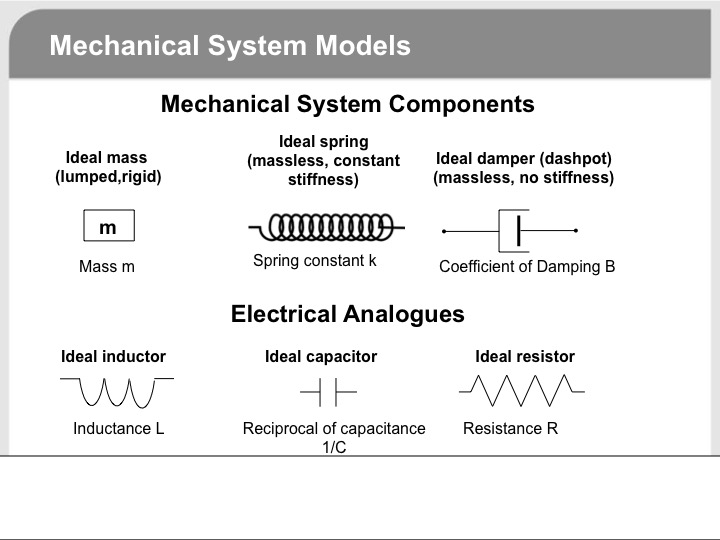 Not the answer you're looking for? Browse other questions tagged electromagnetism electric-circuits electromagnetic-induction inductance or ask your own question.

6
How does current flow if back emf equals to applied voltage
0
Not understanding inductor behaviour in RL circuit
4
Inductor in A.C. Circuit
1
How is the rate of current change in an inductor present in a circuit maintained / decreased?
1
Confusion regarding inductor connected to an AC source
0
Inductor Behavior for Voltages
2
I have a doubt in applying KVL when an inductor comes to play in a circuit
1
Current Through Inductor in Series RL circuit
1
For the transient response of an inductor in a DC circuit, how and why does the rate of change of current (with respect to time) to decrease?