I am stuck on finding the 'right' mediator in weak interactions. Consider the following reactions.

This is mediated by the vector boson $W^+$.

This is mediated by the vector boson $W^-$.

This is mediated by the neutral current $Z^0$.

My question is: is there a systematic way of finding the vector boson or mediator in weak interactions? It might be very trivial but I do not see it. I want to understand this since I want to draw Feynman diagrams well.

In which sense do you mean charge conservation? 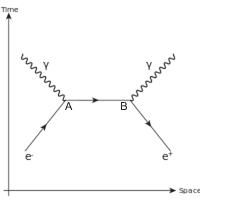 if you take time to be the Y axis, this is a feynman diagram of e+e- annihilation into two photons. Charge conservation means that in time , charge is conserved. Thus e+ and e- add to zero charge, and when they interact the charge leaving the region should be zero. Thus the exhanged particle on the vertex should carry the charge of the electron to annihilate with the charge of the positron.

If you take x to be the time axis , before the interaction, the charge is negative, after the interaction it is negative, thus the intermediary must carry negative charge. Because the spin and lepton number also must be conserved it has to be a virtual electron.

You can figure out for the decays that the weakly interacting intermediary should have a charge, its spin should be one,because it goes into two spin 1/2 particles,it should be weakly coupling, and it should carry no lepton number since there is an neutrino that carries the muon lepton number.So it is only the W with the appropriate charge that can be the mediator. 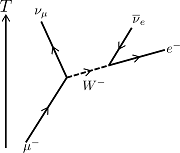 Per @anna v's answer, you must conserve charge at all the vertices--it's kind of like a circuit diagram. You also have to consider the t, u, and s channel processes, as show here:

The s-channel diagram, (c), would be a $W^-$ in order to conserve charge, while the u-channel diagram, (b), there isn't really a direction associated with the exchange boson. It's a $W^-$ if it's going "up" from the incoming to outgoing electron, and it's a $W^+$ if it's going "down" from the incoming neutrino to the outgoing neutrino. The diagram includes both.

Not the answer you're looking for? Browse other questions tagged particle-physics feynman-diagrams weak-interaction or ask your own question.

-1
Charge of $W$-bosons in Feynman diagrams