BTZ black hole as an identification of $AdS_3$

I heard in a talk that a BTZ black hole can be obtained as an identification of the $AdS_3$ spacetime. Why exactly is the statement true?

Also is it true that in (2+1)D all solutions of the Einstein field equations with a negative cosmological constant can be shown to be identifications of $AdS_3$?

First, let us recall that in three dimensions the Weyl curvature tensor is identically zero. Thus, due to Ricci decomposition Riemann tensor is completely determined by the Ricci curvature tensor. In an empty space with cosmological constant Ricci tensor is in turn proportional to the metric (due to Einstein field equations). This means that locally the spacetime looks like (is isometric to) maximally symmetric spacetime: de Sitter or anti-de Sitter space (or flat), depending on the sign of (or zero) cosmological constant.

I heard in a talk that a BTZ black hole can be obtained as an identification of the AdS${}_3$ spacetime. Why exactly is the statement true?

The BTZ black hole arises from identifications of points of anti-de Sitter space by action of a discrete subgroup of $SO(2,2)$ isometries. The construction was first detailed in the followup to the first BTZ paper:

To obtain a BTZ black hole spacetime one has first to select the region of AdS${}_3$ space where the vector $\xi$ is space-like (to avoid closed time-like curves, CTC's) and then identify points in this region connected by the action of a discrete subgroup of one parametric group of isometries: $$P \to e^{\alpha \xi} P, \qquad \alpha=0,\pm2 \pi,\pm 4 \pi,\ldots$$

To visualize this construction one could try to find a fundamental domain for the action of this discrete subgroup. The simplest is a case of BTZ black hole without spin (when parameter $r_{-}=0$), analogue of the Schwarzschild black hole.

A Killing vector field that produces a black hole could be taken as a generator of boosts in an embedding space $J_{YV}$ (This is slightly different than the transformation of the original paper). The flow of this field could be visualized like this: 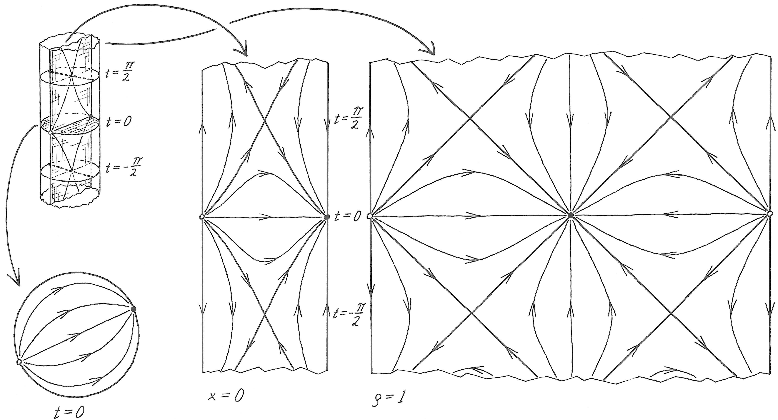 For the discrete identification subgroup action the fundamental domain would look like this (image taken from arXiv:gr-qc/9604005): 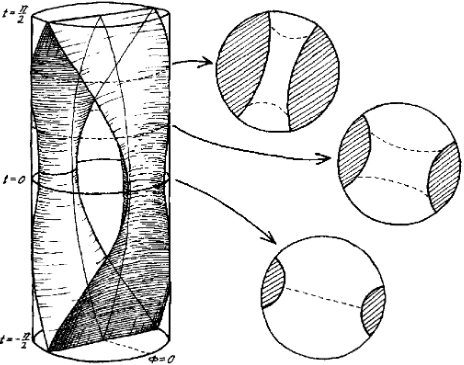 Dashed regions in each slice $t=\rm const$ are excised, (and for $t=0$ they contain limiting attracting and repelling points from previous picture), and dashed lines represent horizons (at $t=0$ it bifurcates). The length of each horizon is of course the same at any moment. Black hole spacetime is obtained by gluing together two cuts in each slice $t=\rm const$. Two regions touching the boundary of a cylinder are asymptotically adS "outside" regions (they would be static in a suitably chosen coordinate system), and the lines $t=\pm \pi/2$ where the fundamental domain ends are the inner singularities (past and future).

Also is it true that in (2+1)D all solutions of the Einstein field equations with a negative cosmological constant can be shown to be identifications of AdS${}_3$?

It seems so. The original result is in a paper:

For annotations, additional explanations and recent references there is a companion paper:

Incidentally, for positive cosmological constant (locally de Sitter space) this is not true.

Not the answer you're looking for? Browse other questions tagged general-relativity gravity black-holes anti-de-sitter-spacetime or ask your own question.

11
Why is BTZ black hole asymptotically $AdS_3$?
9
Why are there negative energy particles inside a black hole?
2
What is exactly rotating in a rotating black hole?
0
Does there exist charged BTZ black hole analogue in 1+3D with a negative cosmological constant?
1
Multi-Black Hole Solutions and No-hair theorem
2
Black hole interior definition