Assistance with visualization of alternating current

Sorry, I'm already ashamed to ask for your help. But I'm feel that I needed in some hints about how to imagine alternating current. I really realize I have trouble with it during reading this document (full but old version is here). There is image on p.29: 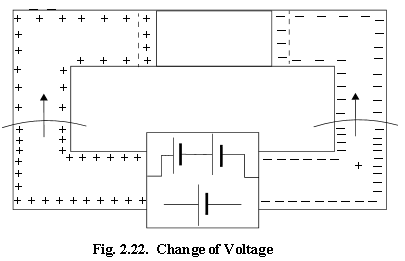 At first, this simple circuit consisting of a battery and a resistor was in some steady state with constant voltage and current all around. Then source voltage is doubled. And there is this transient phase on the image during which a new voltage is forming. Pluses/minuses represent surface charges on the wires. The change in charge distribution travels like a wave-front through the circuit with speed of light.

I explicitly divide all these states apart. Like, 1st steady state with some current in accordance with Ohm's law > transient phase > new steady state after doubled voltage reached resistor with increased current in wires and the resistor.

My problem is that when I try to image AC voltage source instead of DC the mess begins. Since, roughly speaking, there is no steady states now, voltage and charge distribution on the wires is constantly changing. Because of this its hard for me to imagine alternating current in the circuit.

Maybe it would be a little easier for me if I knew the following. On the image above, there are 2 regions, behind "wave front", where a new doubled voltage has already been formed and ahead of it, where voltage is still old.

So my question is about currents in these regions. Is there in the region behind "wave front" already increased current and its value satisfying I = V/R and ahead the front, correspondingly, old value of current ?

If so, I can imagine AC more or less as follows: as voltage propagates down the wires it cause appropriate currents (according to Ohm's law), lets say, in vicinity of wave front. And since length of wires is small in this case, one can think as in some instant of time wave front "ran" through all wire and reach it end. And so we have some concrete equal value of potential for entire length of the wire and appropriate current's value in it.

If this is a wrong idea then I'm lost and would like to hear some tips about how to imagine it. Thanks for the help.

Updated: Now I think this is most likely incorrect because in that case even in an open AC circuit there would be a "normal" current. Well, after a couple of days of reflection and re-reading I realize I'am confuse charge redistribution processes with "main" current so nevermind. I'm going to rephrase the question.

The picture is erroneous. There are no plus charges on the positive end and no minus charges on negative end. The charges in wires of both sides are the same. It's their moving direction that makes difference. For alternative current, the charges (electrons) don't move far away, but viberat at their equilibrium position, e.g. move back and forth at the frequency of the AC.

Think of it as DC, which changes polarity sixty times a second (60cycle alternating current) It's exactly like that in simplest terms possible.

If the top of the picture want to indicate an open circuit, then an AC current will act like if the conductors on the left and right are the plates of a capacitor. On each half cycle, a small current will flow to move electrons toward the negative side, on the right side in the drawing. Half a cycle later, the polarity will be inverted, the left side gaining more electrons.

Not the answer you're looking for? Browse other questions tagged electromagnetism electric-circuits or ask your own question.

2
What is the power in this circuit if the voltage is doubled?
0
How is ampere defined for alternating current?
4
Why is there a voltage drop across things when no current is flowing?
0
Resistance of an inductor in direct current
0
Charging current in open AC circuit
0
Relation between charge and potential difference in transient and steady states
1
AC current and voltage in an Inductor
1
What is the significance of Power factor?