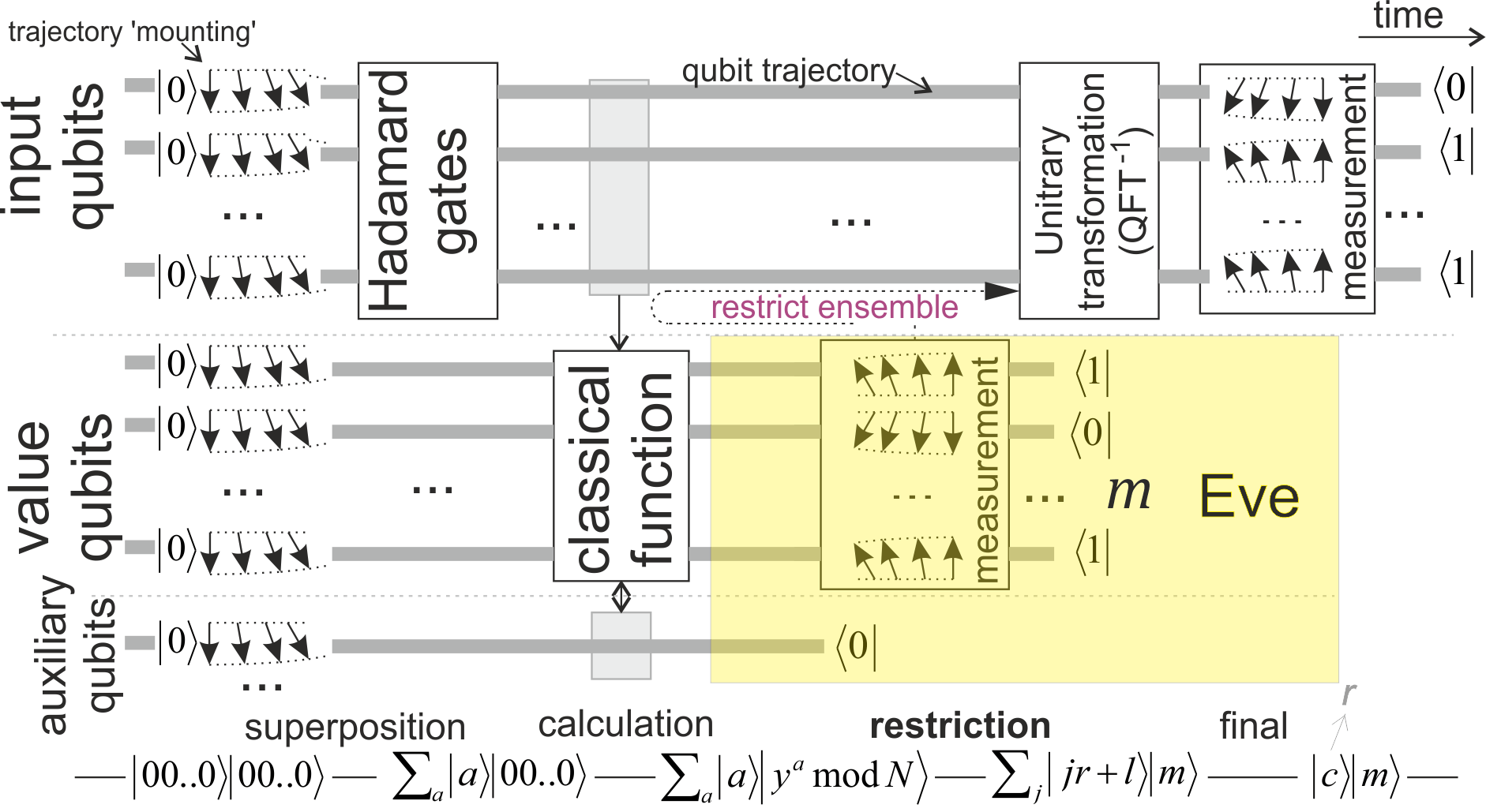 So generally we branch calculations, get the final outcome from the first branch (input qubits), but treatment of other branches seems also crucial to make the algorithm work - including "uncomputing" of auxiliary qubits.

Imagine Bob has access to implementation of Shor's algorithm, but it is leaky - like in the yellow box above, value and auxiliary qubits finally get to Eve.

A natural question is if Eve can cripple Bob's computation? For example allowing him or not to break RSA cipher. If she could, she could also delay this choice.

As uncomputing or not requires input qubits, it seems tough to cripple calculations through auxiliary qubits alone (?)

However, there is Walborn's "Double-slit quantum erasure" experiment (nice explanation), where rotating polarizer for one of entangled photons, we erase or not which-slit information for the second photon - deciding between classical and interfering statistics for this double-slit.

So maybe Eve could erase information from value qubits, e.g. by putting Hadamard gates before measuring these qubits? This way their measurement would no longer restrict to fixed value of classical function, crippling calculations?

quantum-mechanics quantum-information causality algorithms quantum-eraser
share|cite|improve this question
edited May 10 '18 at 4:23
Jarek Duda
asked May 9 '18 at 6:16

Here from an eagles eye perspective:

No matter what Eve does will lead to a measurable difference in Bobs states, otherwise superluminal communication would be possible. Does Bob need to use (perform measurement on them, or let them directly interact with his qubits) the qubits which are at Eves? If yes then of course she can cripple Bob algorirhm by just throwing them away, or.measuring them.and not telling Bob the result. If no, then Bob can.just continue and he will get the same results no matter what she does.

No. This is guaranteed by the no-communication theorem. If Eve's measurements could affect whether Bob succeeded or not at finding factors, this would allow for a faster-than-light communication mechanism.

However, there is Walborn's "Double-slit quantum erasure" experiment (nice explanation), where rotating polarizer for one of entangled photons, we erase or not which-slit information for the second photon - deciding between classical and interfering statistics for this double-slit.

If you actually do an eraser experiments, with Eve deciding whether or not to rotate a polarizer in an attempt to control the pattern that Bob sees, you will find that it doesn't work. At least not the way you think. Bob will always see no interference pattern.

In the factoring scenario, this would be a bit like Eve telling Bob which runs he's allowed to use and which he has to throw away. She may be able to use the ancillae to predict which runs are bad at a rate better than chance.

For example, if Eve performs a QFT on the ancillae then measures them and gets the result 0000...00, then she can confidently say that Bob's attempt to factor the number failed / will fail. But she's not controlling anything, she's using measurement results to infer related information.

Not the answer you're looking for? Browse other questions tagged quantum-mechanics quantum-information causality algorithms quantum-eraser or ask your own question.

9
Shor's algorithm - why doesn't the final collapse of the auxiliary qubits cripple the computation?
11
Causal explanation of Vaidman's group “Asking photons where they have been” experiment?