This problem on energy transfer between coupled oscillators is from Introduction to Mechanics Kleppner and Kolenkow.

Consider again the two-pendulum and spring system we have just discussed. Suppose that one of the pendulums, called pendulum 1, is displaced to angle $\theta_0$ and released at $t = 0$. Initially, all of the energy of the system is in pendulum 1. The problem is to see what happens to the energy as time goes by.

The system oscillates at average frequency $\omega_- $, but the amplitude of oscillation slowly swings back and forth between the two pendulums at frequency $\delta$. Initially the energy is in pendulum 1, but when $\delta t = \pi/x$, the energy has transferred to pendulum 2. The energy eventually returns to pendulum 1. As the coupling is decreased, $\delta$ grows smaller and it takes longer for the energy to transfer. Nonetheless, it will get there eventually.

The parts where I got confused:

1) Yes, you are right, but it really does not make much difference: sine and cosine are pretty much the same thing, with one just shifted over by a phase from the other.

2) They are assuming that the two frequencies are close, so $\overline\omega$ is also close to them and somewhere in between, but $\delta$ as the difference of two almost equal quantities is much smaller. So you hear a wave of frequency $\overline\omega$ but the wave is not of constant amplitude: it is "modulated" by the $\cos \delta t$ factor and you hear a (relatively) slow variation in loudness. If you take two tuning forks with identical frequency and wrap a rubber band around the leg of one to change its frequency just a little bit, you can start them vibrating and hold them close to your ear. You can then hear the wave at the basic frequency but the loudness will go up and down relatively slowly (the phenomenon is called beats and was used when making tuning forks: one was a standard and the other was modified until there were no beats produced. It's also used in tuning musical instruments: when there are no beats (i.e. $\delta = 0$), the two instruments are exactly in tune).

So you have a slow oscillation superimposed on a fast one: 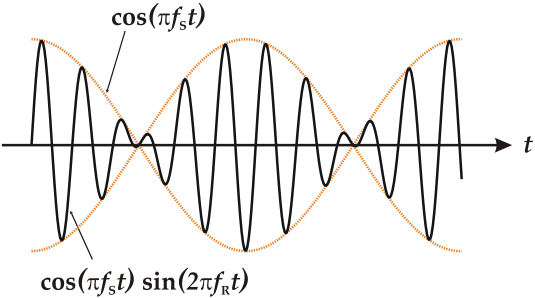 3) Note then when $\cos \delta t$ is 0 then $\sin \delta t$ is maximum (or minimum) and vice versa. So at $t=0$ the amplitude of the first pendulum is maximum and the amplitude of the second is 0 (because at $t=0$, $\cos \delta t = 1$, $\sin \delta t = 0$). But some time later, when $\delta t = \frac{\pi}{2}$, the cosine is 0 and the sine is maximum (in absolute value). At that time, the amplitude of the first pendulum is 0 and the amplitude of the second is maximum. In between, one amplitude increases while the other decreases and the energy sloshes back and forth between the two pendulums (pendula?). That's not so easy to see with tuning forks but it is easy to see with a slinky to provide the weak coupling and a couple of cans of soup suspended with strings (see Crawford's "Waves" in the Berkeley Physics series from the 1960s: he includes a bunch of fascinating "home experiments" in the book). There are YouTube videos that illustrate this if you don't want to set up your own experiment.

And you were right about $x$.

Not the answer you're looking for? Browse other questions tagged newtonian-mechanics harmonic-oscillator oscillators coupled-oscillators or ask your own question.

5
Energy transfer in a coupled pendulum
3
Synchronizing Pendulums
0
Natural frequencies of a torsion system
1
Rotational kinetic energy in double pendulum
5
Coupled oscillators with imaginary frequency?
0
Why do two pendulums with the same period meet at this angle?
0
Phase difference between two waves confusion