Surface charges on grounded conductors in circuits and energy transfer

I'm trying to learn electromagnetic phenomena on my own and some textbooks / articles which I read at first claims that there are surface charges on wires in circuits (DC particularly).

Distribution of these charges takes a form of rings (which seems to be important).

Image from Matter & Interactions by Ruth W. Chabay and Bruce A. Sherwood.

More or less same information was in various articles and books about electromagnetism, transmission lines etc.

So if my understanding is correct these surface charges are responsible not only for voltage between wires (i.e. electric field) but also creates the necessary conditions for current flow inside conductor (at least in simple DC cases), wich give us magnetic field.

And fundamentally all these mechanisms provide energy transfer from source to load by means of these electric & magnetic fields.

I thought i grasp general concepts but then it revealed that some conductors in real world seems to be grounded (e.g. outer conductor in coaxial cables, Neutral wire in three phase power system etc.)

Attempts to find any information about what is going during this process on microscopic level was unsuccessful. So my questions are:

Let say we have circuit consisting of battery and light bulb and we ground it (by grounding i mean to literally connect one of conductors of this circuit to Earth).

Isn't all the charges will flow to Earth from surface of grounded conductor (or redistribution at least break these ring patterns of charges) ?

But in this case circuit must stop to operate properly i.e. no surface charges hence no fields, no energy transfer etc.

I'm totally confused at this point. I thought these mechanisms same for almost all situations (from this simple 1.5V DC to power cord and HV lines) and hence the charges absolutely necessary at any case.

I know my knowledge is superficial but i'm trying to create some mental model for myself. Please help.

P.S. I afraid i'm not ready for things like inducted non-conservative E field, EM radiation etc yet so please try to avoid it.

I think you have a good grasp of general concepts regarding surface charges.

Will grounding affect surface charges in your circuit? Practically not.

The charges will not flow from the surface of the grounded conductor to the ground.

If you grounded a charged conductor, all its charge would move to the ground and leave the conductor neutral. But your circuit is neutral to start with, so there is no excessive charge to get rid of.

The existence of the surface charges in your circuit have to do with the capacitance of the wires. Because of that capacitance, some charges from the battery will move to/from the wires to charge this small capacitor, even if the circuit is open.

If one of the wires is grounded, say, a wire attached to the negative terminal of the battery, a couple of electrons will move toward the ground, just as if it was another piece of wire, which could slightly increase the capacitance between the wires.

But, that increased capacitance will be limited by the size of the second, positive, wire and therefore it will still be very small, so it won't take much of additional charge to keep the same (battery) voltage between the two wires.

If we close the circuit and let the current flow through a light bulb, the distribution of the surface charges will change to reflect the new voltage profile (a small fraction of the battery voltage will drop on the wires, while most of the voltage will drop on the light bulb), but the circuit, as a whole, will remain neutral and, therefore, no charges will move out, if it is grounded at any point. 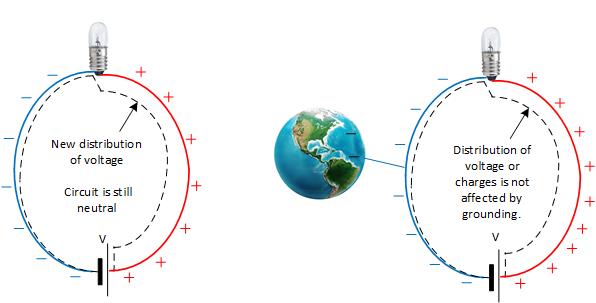 In other words the effect of the grounding on the distribution of surface charges will still be negligible and will have to do with minute changes in the capacitance between the wires.

Grounding a conductor means that it will be in conductive contact with the ground, which has potential of unchangeable value, usually set to 0.

If the current in the system is stationary, this means that the conductor itself will have the same potential.

But this does not imply that all charge carriers will be sucked away into the ground. Charges are still needed on the surface of the conductor to create electric field inside it that corresponds to current that flows through it (the field necessary can be calculated from the current using the local Ohm law).

You may find useful the VPython program tinyurl.com/SurfaceCharge which lets you explore interactively the electric field of surface charges whose distribution was calculated offline. In the first situation, "Polarized metal block", you will find that the net electric field to the right of the metal block is actually significantly larger than the field due to external charges (the positive charge to the left of the block). In other words, the metal does NOT "block" electric field, the field to the right of the block gets bigger, not smaller, when the metal is moved into its position.

Next, explore the electric field in a similar situation, but in "Grounded" metal object the metal is (approximately) grounded, and you find that the net field to the right of the metal block is nearly zero. Zoom out, and you'll see that the difference between this situation and the first one is that this piece of metal is attached to a distant block of metal that imitates the role of the whole Earth in terms of "grounding". Note too that near the external charge there is a big concentration of negative charge on the left side of the nearby metal but almost no charge on the right side, unlike the situation in the first case. In the grounded case, where the net field to the right is nearly zero, the net field to the left of the nearby metal is larger than it would be without the grounded metal being present.

To see how the same field and current in a circuit can result from very different external conditions, explore the situations labeled "In a solenoid" and "Off-center in a solenoid". I realize you don't want to be concerned at the moment with Faraday's law, but for the moment accept the fact that inside a long solenoid, which has a magnetic field that is uniform throughout the solenoid, if the current (and magnetic field) is increasing at a constant rate in time, there is a curly pattern of ("non-Coulomb") electric field. Observe in the two cases how very differently the circuit polarizes yet the pattern of electric field is the same. Here is my blog article about this case: https://brucesherwood.net/?p=138

Not the answer you're looking for? Browse other questions tagged electromagnetism energy charge or ask your own question.