I'm a first year student in university, when electric field of objects is taught, we have seen that an infinite large and homogeneous plane with almost zero thickness creates a constant electric field $\dfrac{\sigma}{2\epsilon_0}$ where $\sigma=Q/Area$.

1.) I can understand the following idea.

Let there be only this infinite plane(+ charged) and only one point charge $+q$: 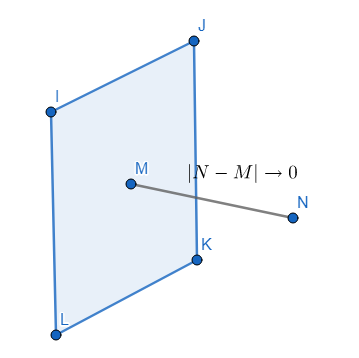 2.) I cannot understand the following idea.

What would happen, if two infinite homogeneous (both are + charged) zero thickness planes were approached to each other?

Because of the superposition principle, we can sum their electric field in a certain area, for example when we approach two this kind plane let choose two equal area from each plane which are parallel to one another. Therefore, eventually if two planes get too close, one another force will be something like that: $F_{A_1,A_2}(r\to 0)=\lim\limits_{r\to 0}k\dfrac{(A_1\sigma)(A_2\sigma)}{r^2}=\lim\limits_{r\to 0}\dfrac{Constant}{r^2}\to\infty$ 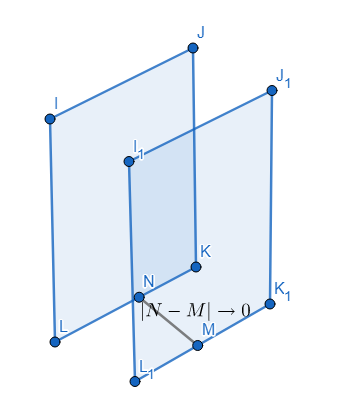 So why does not two infinity planes' electric field create an infinite force if they are too close each other.

Most of the charges on one square are distant (>>r) from charges on the other square so the force is much less. A proper calculation would involve an integral over both squares. Since we are simple physicists, we don't do unnecessary integrals. Instead we make the idealization of infinite planes and use the symmetry argument that the electric field is normal to the planes.

(Of course, the force for infinite planes is infinite, but the force per area is finite.)

Not the answer you're looking for? Browse other questions tagged electric-fields or ask your own question.