Charge Trajectory in the Faraday disk

In the left figure, a Faraday disk rotates in a uniform magnetic field. A circuit is connected to the disk via a sliding contact, as in the figure. The EMF of the circuit is found by integrating the magnetic force on each charged particle over the radius of the disk:

where $a$ is the disk radius and $\omega$ is the angular velocity of the disk.

In the figure to the right, the blue curve, a spiral moving outward, is the trajectory of a particular (positive) charge in the disk, under the influence of the combination of the magnetic force and its tangential velocity, denoted by $\mathbf V$

However, I am having an issue understanding why there can be a current in the loop even though the trajectories of the charges are spirals. Intuitively, I would expect an electron in the disk to move in a straight line from the center to the edge.

Could you explain to me why the trajectories of the charges in the disk do not contradict the fact that we have a current from left to right (with reference to the right figure)? 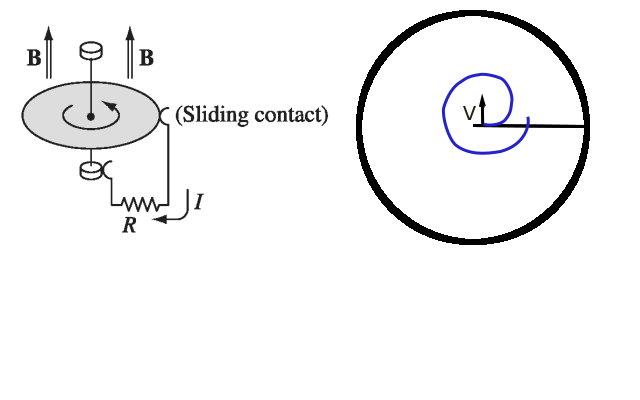 Just think of this as a normal circuit with a battery in series with a resistor, where our battery is our spinning disk in the magnetic field.

The same idea of this question could be asked for anything that provides an EMF for a circuit (even your typical battery).

2
Derivation of Ampère's force law
2
Understanding the Faraday tensor
3
Failling to understand why a rotating disk inside an uniform magnetic field generates a potential difference
2
Confusion about induced emf vs motional emf
2
Electric potential vs induced emf
7
Why is the electric field created by a battery non-conservative?
0
Magnetic Field and Electric Feild Confused
0
General Question about Faraday Disk and a Loop
0
Location of high and low potential points in motional emf