Why some dynamic systems can undergo sudden changes?

Everybody has observed that the weather may change from beautiful sunshine to extremely bad weather (heavy rain, stormy winds, ...) within less than half hour. What is the fundamental reason for this?

And there are many other natural systems that change extremely rapidly. Even in rock climbing, for example, if you have placed the feet on a hold, they may slip off in a fraction of a second in case of improper foot placement. What are the reasons for ultra-rapid changes in time, i.e. that for a (field) quantity $X(t)$, the value

does not tend to zero?

In the context of dynamical systems, there are at least three main mechanisms that can lead to sudden changes: 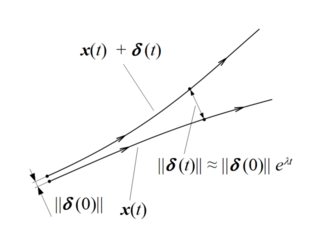 where $\lambda$ is the Lyapunov exponent.

Multistability means that more then one outcome is allowed by the dynamics, with the system's initial condition determining which one is eventually attained. The region in phase space whose points evolve to a given attractor is called its basin of attraction. In the double well potential, for instance, each of the two local minima is an attractor in the presence of dissipation, with their basins of attraction looking something like: 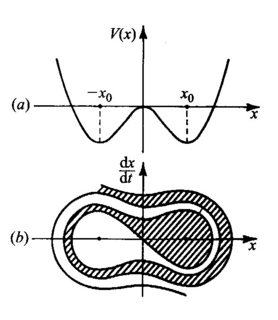 This situation can lead to sudden changes when the system finds itself close to the boundary between two basins of attraction. And when the basin of the desired outcome is relatively small, it's hard not to be close to the boundary. Not falling, in the rock climbing example, could be seen as the desired basin, and it's a rather small one, given the typical safety margins of a few millimeters or less.

In a bifurcation, the system experiences a qualitative change in behavior with the variation of a parameter. In some sense it's then not exactly the same system as before. For example, if in a $1$-D system, the point $0$ is an attractor for negative values of its parameter $r$, but a repellor for $r>0$ (where two other attractors arise), the system undergoes a bifurcation at $r=0$ and its bifurcation diagram (attractors and repellors as a function of a parameter) can look like: 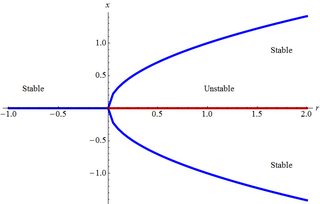 Not the answer you're looking for? Browse other questions tagged classical-mechanics chaos-theory non-linear-systems complex-systems bifurcation or ask your own question.

7
How and why can random matrices answer physical problems?
14
What are some of the best books on complex systems and emergence?
0
Why can some oscillations be modeled by Simple Harmonic Motion, while others cannot?
1
Why do the KAM tori divide the phase space into disjoint parts in $d\leq 2$ systems?
4
Can phase transitions occur in open systems?
3
Why is chaos a common property of thermal systems?