I am trying to wrap my head around the energy terms that arise from the following discrete systems vibration problem: 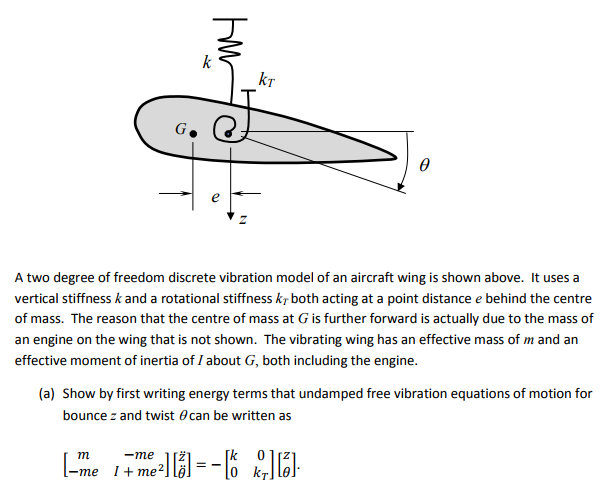 The potential energy terms seem simple enough. I include the elastic potential of the spring with stiffness $k$ and the torsional stiffness of the wing $k_T$:

The kinetic energy terms of the wing is something I'm uncertain about. I visualise the wing in much the same way as a rolling wheel - I include the translational motion of the entire wing in the z direction due to the spring (down being +ve) and the rotational motion of the wing about some point to the right of $G$ a distance $e$ away. The parallel axis theorem must be used here as the rotation does not occur about the center of gravity $G$:

However, my kinetic energy terms seem incomplete since the Langrange equations do not match what is provided in the mass matrix in (a). What am I missing? I thought about including the tangential velocity of the wing mass would make sense but the rotational energy of the system is already accounted for by the $\frac{1}{2}(I+me)\dot\theta^{2}$ term. What have I not taken into account?

Not the answer you're looking for? Browse other questions tagged homework-and-exercises vibrations discrete or ask your own question.

0
Natural frequencies of a torsion system
5
Alternate Formulation of Kinetic Energy for Lagrangian
1
Application of Euler-Lagrange equations (Trivial problem, instructive one)
0
Lagrangian of an inverted pendulum on a moving cart
0
Anharmonic terms of Lagrangian of spring pendulum with free support