I have been reading about Michelson Morley experiment. According to the explanation given in that book the experiment tried to detect ether wind when earth was moving through ether. But doesn't that assume that matter interacts with ether to create this ether wind. I we assume that ether doesn't interact with matter but only propagates light then there would be no wind to detect in the first place. Please someone explain to me why ether cant be a medium which does not interact with matter but only propagates light?

Below are two images showing ether interacting with matter and not interacting. Ether wind is only created when matter interacts with ether. Why can't the explanation that ether doesn't interact with matter be a solution to the ether problem? (I am sorry if the answer to this question is very basic. I am not a physicist. I just want to understand this qualitatively. I tried searching this on Internet but I could not find any answer.) 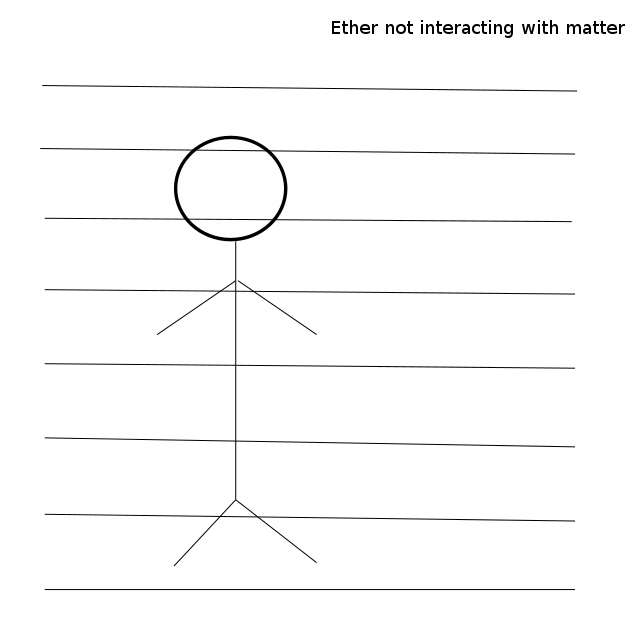 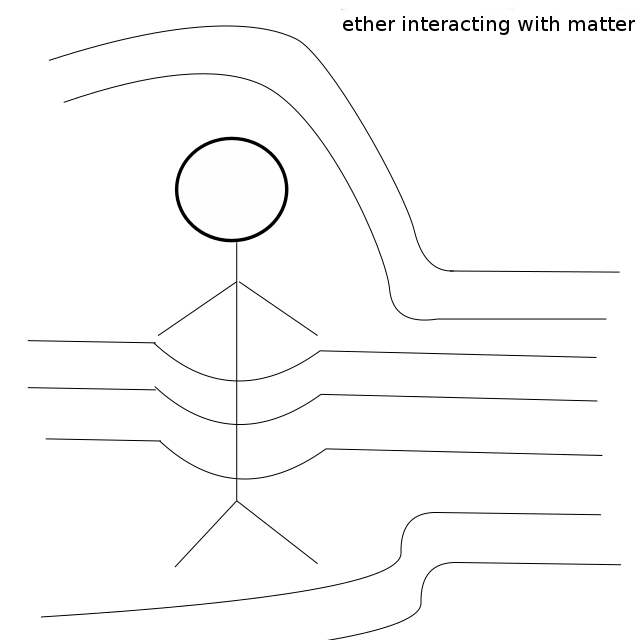 The effect which has been tried to be measured was similar to the following: Imagine a plane going from south to north and then back from north to south. You can calculate that if there is wind blowing from south to north all the time, the plane will be slower than without wind. It will be accelerated on the way there and decelerated on the way back but the effects do not exactly cancel out, the deceleration effect is stronger because the plane spends more time for the way back.

The M&M experiment tried to measure this effect. In the plane and wind example what was essential was interaction between plane and air. In the actual M&M experiment the essential part is the interaction between light (corresponds to the plane) and ether (corresponds to the air). Turned out, there is none. So, my point is, it doesn't matter if ether interacts with matter, what matters is, if it interacts with light or not, and according to M&M it doesn't. But if it doesn't it cannot be the medium light propagates through and we can remove it from our model altogether.

But doesn't that assume that matter interacts with ether to create this ether wind?

No. It is simply enough to note that there is no frame which is at rest relative to all reference frames. In Galilean relativity, a body's observed speed is in general changed by a change in the observer's motion state: a change is wrought unless the motion state change is defined by a very special velocity vector that adds to the observed velocity vector to bear the latter along an equal-speed circle. An there is no observer motion state change that will preserve the speeds of two or more general equal speed bodies.

Actually in most aether theories, it was pretty essential and obvious that aether did not interact with what physicists called "matter" in the nineteenth centuries - otherwise there would be all kinds of observable effects such as drag and force of otherwise unexplained origin on material bodies, and that's not what science - even in the nineteenth century - observed.

Ultimately, for all the discussion of the Michelson-Morely experiment and all the considerations that led to special relativity, the only property an aether needed to have was to merely define a frame of reference relative to which light would have the propagation speed foretold by the relevant dynamical equations, i.e. Maxwell's equations. Later, even this property was eviscerated when Lorentz formulated Lorentz Aether Theory which is identical in its experimental predictions to special relativity. User ACuriousMind summarizes this theory, and why special relativity is preferred, in his answer here. Also, some more information in my answer here.

Once Maxwell postulated his electromagnetic theory, there is a definite prediction of the speed $1/\sqrt{\mu_0\,\epsilon_0}$ of light and so one cannot easily avoid the question, "what frame is this predicted speed relative to?". One could not avoid the question in the nineteenth century because in Galilean relativity observed speeds generally changed by a change of the observer's motion state. And then, in the nineteenth century, one would look to other known wave phenomena - most notably acoustic waves - and witness that the speed of propagation predicted from the dynamic equations was always a speed relative to a certain frame, namely that which the acoustic medium was at rest in. So the natural inductive step was to assume that for light too there had to be some privileged reference frame at which light would move at speed $1/\sqrt{\mu_0\,\epsilon_0}$ relative to. Note that Maxwell's equations would accordingly change their form in frames other than this one, as is so for acoustic waves in frames other than the one at rest relative to the medium.

Not the answer you're looking for? Browse other questions tagged special-relativity speed-of-light relativity inertial-frames aether or ask your own question.

5
Isn't the aether existent?
1
Why is the Luminiferous aether theory wrong?

1
Michelson-Morley experiment
0
“If the astronaut found that light slowed down relative to his motion, he would have detected the very ether wind that Michelson failed to detect”?
2
On stellar aberration in the context of ether drag hypothesis
1
Michelson-Morley's experiment - neglecting gravity?