What is the purpose of torque in projectile motion?

Intuitively, it's the rotational effect of force. However, using the above definition of torque we can calculate the torque due to a force acting on any particle about a reference point.

Consider projectile motion for instance. A particle was projected at an angle $\theta$ with a speed $u$. I calculated the torque due to weight at the highest point of the particle's trajectory about the point of projection to be $-mu^2\sin^2\theta$.

The thing that confuses me is that here there's torque but no rotation. What is the purpose of torque in projectile motion then?

The equations that you have obtained for the trajectory of a projectile can be obtained by considering the torque which is acting on a mass $m$ and equating the torque to the rate of change of angular momentum.

The constant force acting on the mass is $-mg \hat j$. 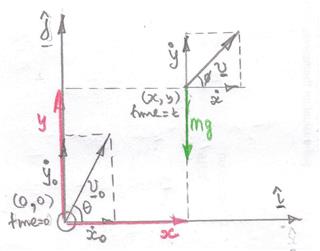 where $\hat k$ is the unit vector coming out of the screen.

which are the equations that you get by applying Newton's second law to the horizontal and vertical motions of a projectile.

Not the answer you're looking for? Browse other questions tagged kinematics rotational-dynamics torque rotation rotational-kinematics or ask your own question.

0
Who told us how to measure torque?
2
Is it a convention in physics to consider torque by pseudo force as a real torque?
0
Torque around the origin of a particle using moment of inertia (in 2D)
3
Difference between torque, moment and couple
1
Torque and Angular Momentum for point particles
0
Centrifugal acceleration in projectile motion
0
What is the physical difference between torque vs torque about a line?
1
Projectile motion in vertical circular motion