My daughter has expressed interest in spectroscopy for a science fair project. I'm wondering how far it is possible to take the "cheap plastic diffraction grating and cardboard tubes" approach to building a spectroscope. Is it possible to build something with minimal experience, no budget, but careful planning and effort that can perform beyond the old standard of looking at different kinds of light bulbs and noticing that the spectra look different?

It looks like the diffraction grating slides on Amazon are 1000 lines per mm. Does lines/mm translate directly into the resolving power of the scope or is there more to it? If we cleverly hooked up our cardboard 'n plastic scope to a high-res digital camera and/or a telescope, on a scale of "hey look, a rainbow" to "we can measure doppler shift in the stars" what is theoretically the best we could do?

is a very open ended question and some of the things that you have suggested can be done at home but it will required varying degrees of knowledge, understanding and time.

For example you are not sure about the number of lines per mm and how this will affect what you see.

The resolving power of a diffraction grating when you are using $N$ lines in total and the $n^{\rm th}$ order is given by $\dfrac {\lambda}{\Delta \lambda} = nN$ where $\lambda$ is the wavelength that you are observing and the nearest different wavelength that you will see as a separate line is $\lambda \pm \Delta \lambda$.
So if you put a slit right by the grating then it is only the lines on the grating within the slit which will affect the resolving power.

This might mean that more liens per mm is good?
That is not necessarily so.
You can just put a diffraction grating on the front of s DSLR camera and the images that you will get do produce a spectrum.
However increasing the number of lines per mm has two effects:
The spectrum is formed at a larger angle from the straight through line and also the spectrum is less bright. 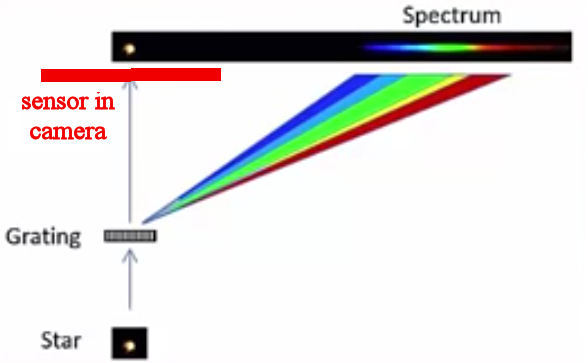 You see an immediate problem.
The angle of diffraction is so large that the spectrum does not fall on the sensor in the camera.

So chances are that you actually need a grating of 100 lines per mm which will allow the spectrum to fall on the camera sensor and it will also mean that the spectrum will be brighter?

Once you have taken the photograph what are you going to do with it?
Here is the sort of image which might be produced. 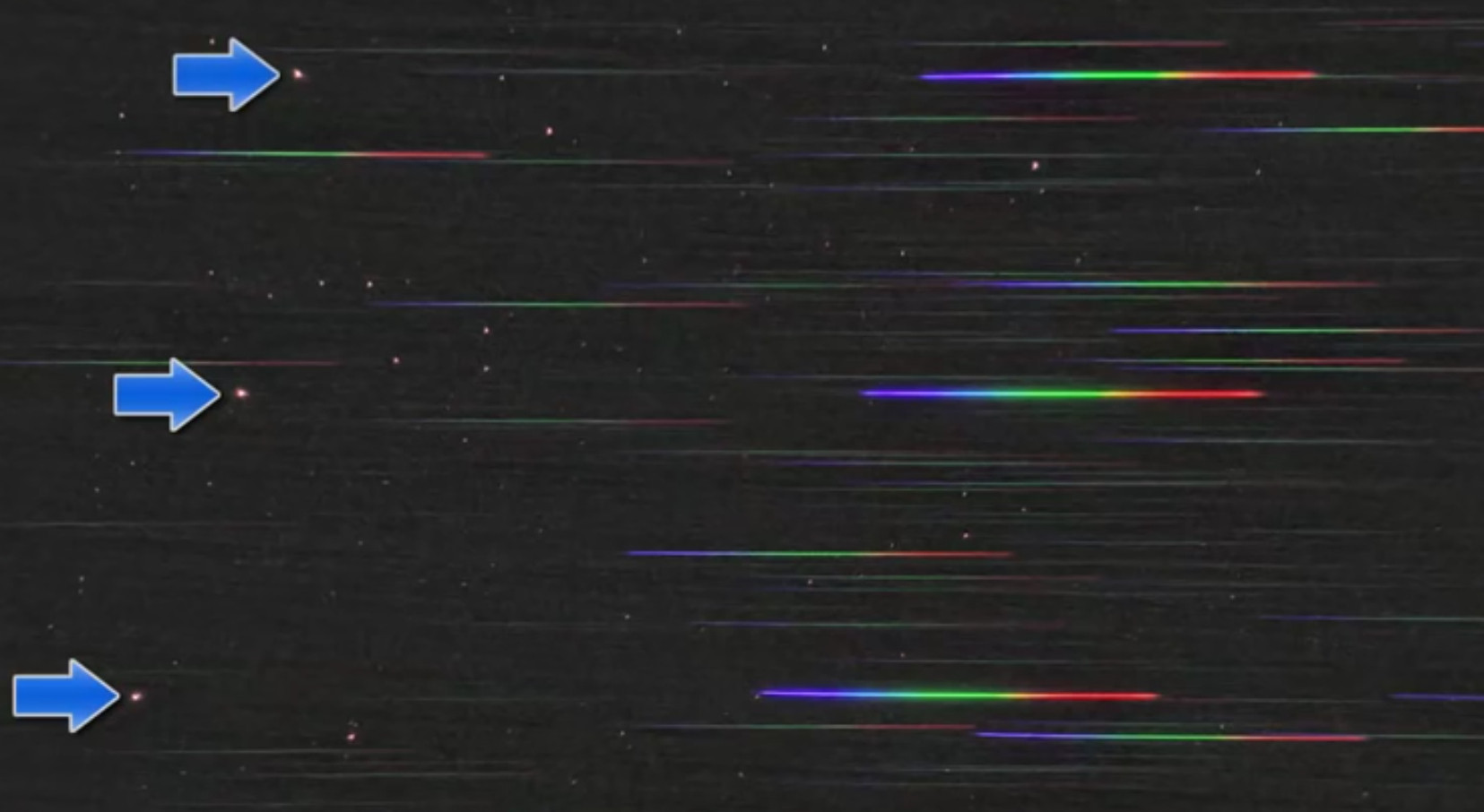 The stars are indicated with the blue arrows and you can see their spectra to the right.
The next step would be to analyse the intensity of the various colours within the spectrum which you could do with a drawing/painting package.
The are problem including the non linear response of the camera sensor for different wavelengths of light.
There is software which does this for you.

So I hope that you realise that an answer here will not solve all your problems and I do recommend a search of the Internet particularly of sites dedicated to Astronomy if you want to pursue the astronomical angle.

Perhaps a simple project might be to find the spacing of the "grooves" on a CD when the CD is used as a reflection grating.

Get a laser pointer and shine it at a glancing angle on the rule and you will get a series of spots on a screen which is placed remote to the laser pointer. 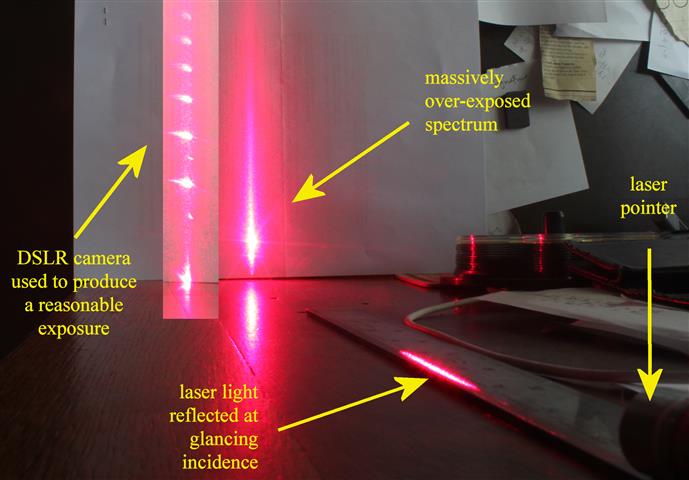 The images show the difficulty of photographing spectra which exhibit a large contrast.
Although the theory is a bit tricky you can from the known spacing of the rulings on the rule and the spacing of the spots formed on the screen find the wavelength of the laser light.
The wavelengths of different colour laser can be compared.

So getting the grating is the relatively easy part it is what you do with it which takes more time and effort.

If you have more queries then please post them on this site and I am sure that help will be at hand.

I have not done any extensive searching but in fairness to the site rspec-astro.com as I have used some of their images I give you the link for them but I do not vouch for them.

Higher line density translates into better resolving power within limits, and $10^6$ lines per meter is not extreme. But depending on how you rig your system it might still be more than you actually want, because more dispersion translates to finer feature but also to dimmer ones.

For comparison, we have a benchtop student spectrometer at my place that is suitable for examining spectra by eye, and it uses only 14,500 lines per inch instead of the 25,400 of the ones you're looking at. It projects the whole visible spectrum onto a scaled screen about $20\,\mathrm{cm}$ wide. but it requires a fairly bright source (a gas discharge tube right up against the aperture). You can reliably resolve feature locations to a few nanometers, which is enough to, say, measure the constants associated with the Balmer series to modest precision. It is, of course, not suitable to looking at the fine structure.

Measuring Doppler shift by reading such a device by eye would require speed around $0.01c$. Projecting the spectrum onto the detector surface will take some arranging but ought to give a considerable improvement in resolving power.