I am a bachelor physics student and as an assignment we had to perform measurements on an FT spectroscopy setup.

Our setup consisted of a Michelson interferometer through which the light of two sources namely a HeNe-laser and a sodium lamp, passed at the same time. The light of the interference pattern was split into two. One of the beams was passed through a polarizer to filter out the laser light (partially). Both beams were sent to their respective detectors which measured the intensity in a single spot of the interference pattern.

One of the mirrors of the interferometer was attached to a moving stage which was moving at a constant velocity during the measurement.

Here is a drawing of the setup: 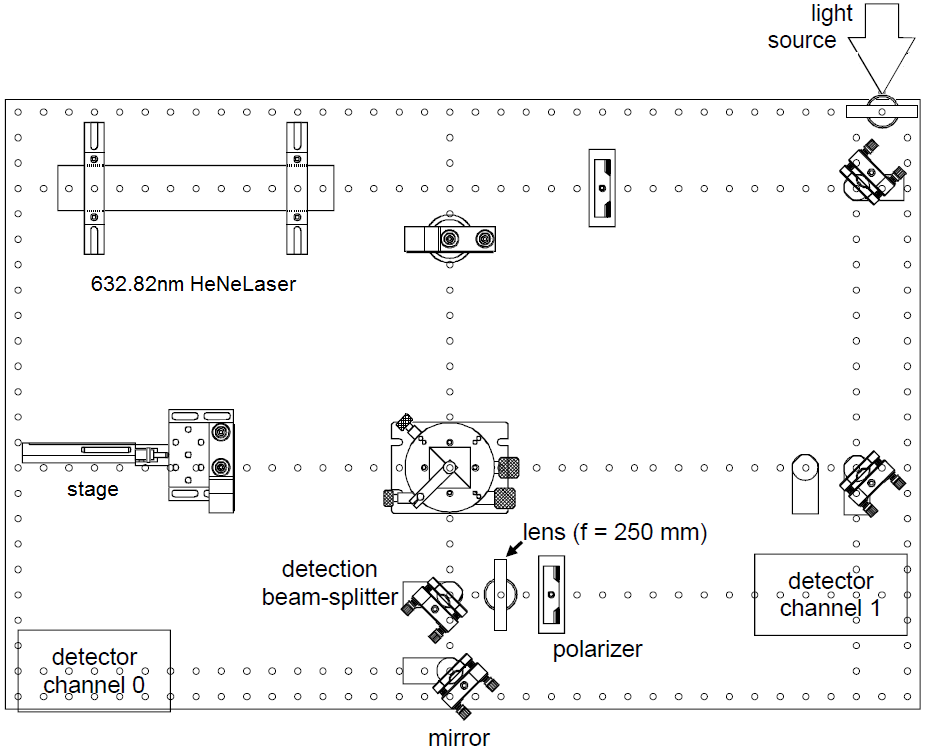 The data from detector 0 was used for calibration. We assumed the laser light consists of a single wavelength of light. We measured however that there were varying frequencies in the intensity. These variations must therefore be caused by flaws in the setup (like faulty calibration or inconsistency in the speed of the stage).

The variations were corrected by moving the data points along the time axis such that a nice sinusoid remained. The frequency of that sinusoid was chosen to be the average frequency of the original data (I am not sure if this is true. We were not told the exact details of the data correction procedure.) To prepare the data for Fast Fourier Transform the data points were moved along the sinusoid such that they were spaced equally horizontally.

Here is an illustration of the procedure: 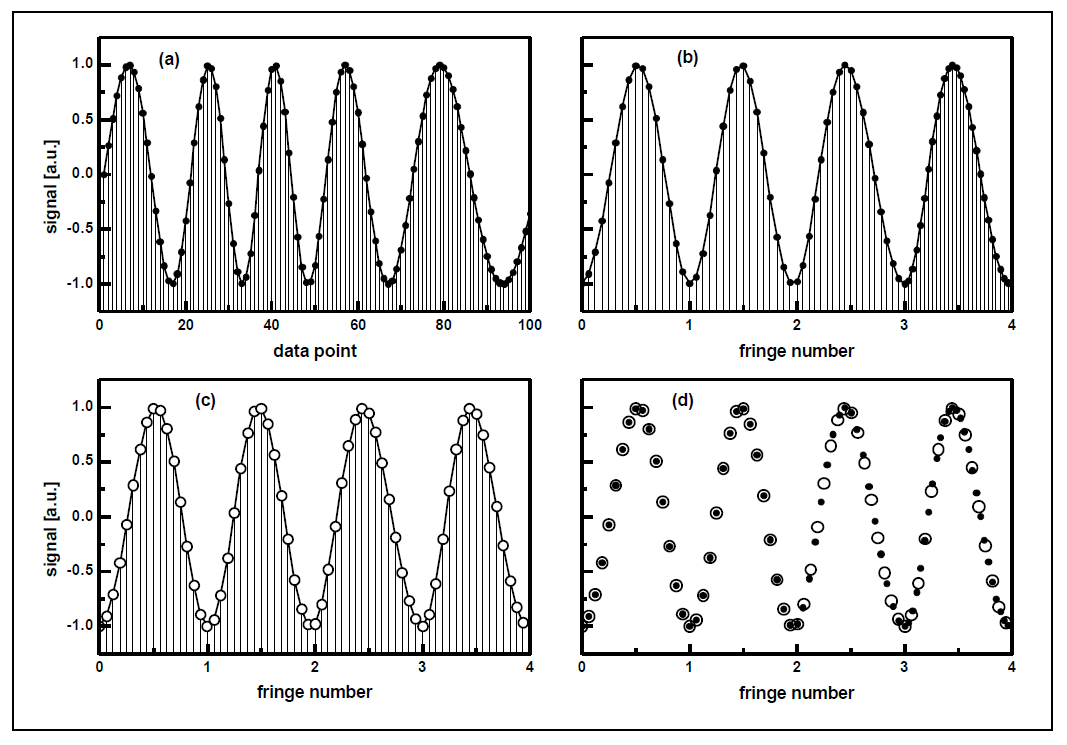 The data from detector 1 was Fourier transformed (using the FFT algorithm). The frequencies found from this were scaled down by a factor of $\frac{2v}{c}$, where $v$ was the speed of the stage. (I am leaving out the derivation.) We scaled the frequencies back up such that the frequency of the laser peak matched its optical frequency and turned those into wavelengths.

This gave the following spectrum: 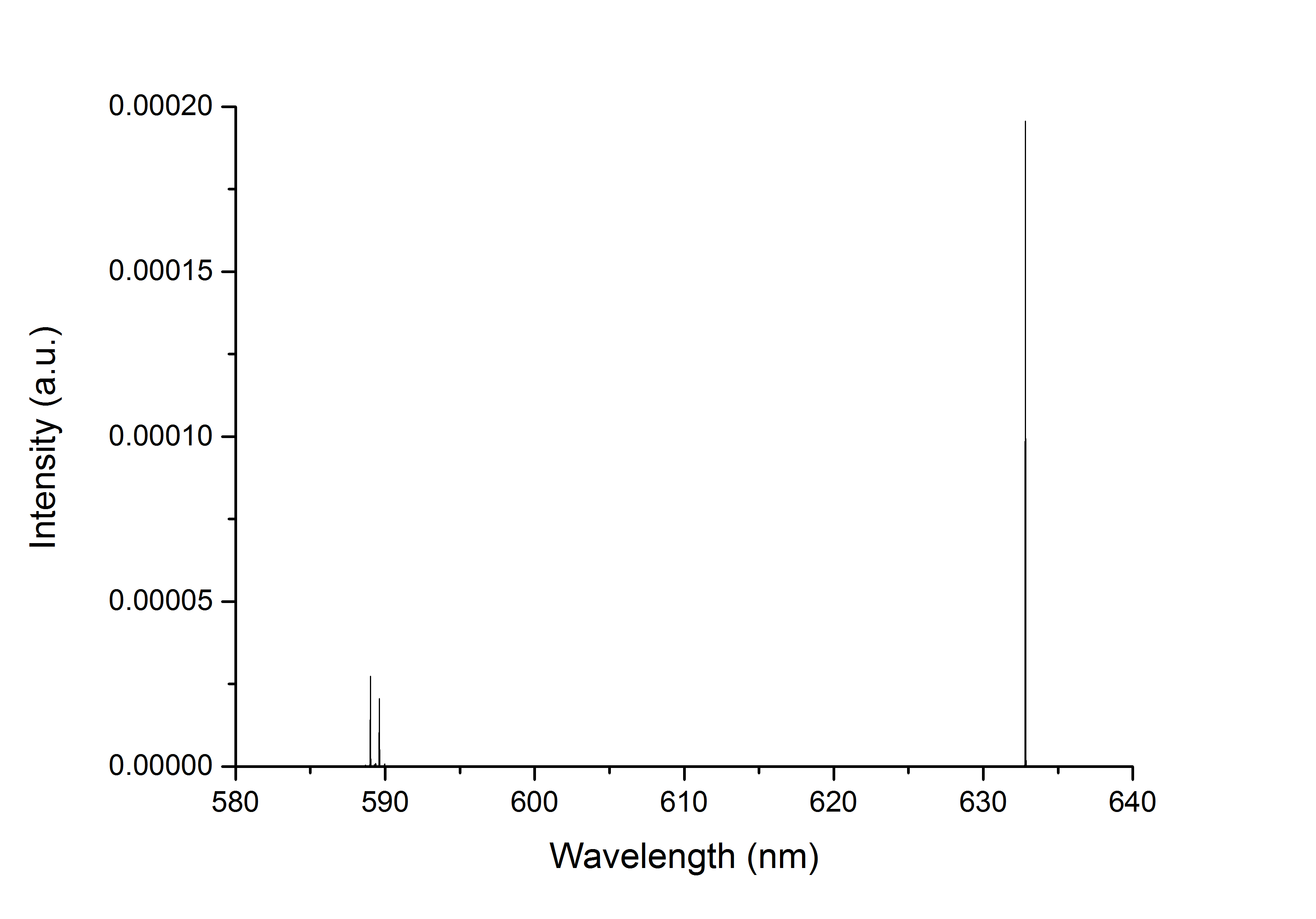 The time for measurements has long passed so it's no longer possible to make new measurements.

What I am also interested in are the factors that influence the resolution.

I was thinking about a hypothetical case where the detectors could measure infinitely fast producing a continuous signal. The setup would also have a special laser with a variable wavelength instead of a sodium lamp.

By collecting the data from detector 0 which is measuring the intensity of both lasers and applying a continuous Fourier transform (we are skipping the data correction procedure) a spectrum is obtained.

Because of the variations in the frequencies each laser will produce a normal distribution (a Gaussian) in the spectrum. The spectrum then consists of a sum of two Gaussians.

One method of finding out how many peaks there are in a spectrum is counting the maxima. If the Gaussians are far apart we can see two maxima. But when two Gaussians get closer and closer together (the distance between their maxima decreases), at some point their sum will only have a single maximum before the tops of the two Gaussians have overlapped. At this point the two peaks can no longer be distinguished and our method will tell us there is only one peak.

For the following plot we took the sum of two identical Gaussians $e^{-(x-a)^2}+e^{-(x+a)^2}$. The two Gaussians are a distance $2a$ apart. By taking the derivative with respect to $x$ and setting it equal to $0$, the extrema can be found. In the plot the $x$-coordinate of the extremas are plotted against $a$. WolframAlpha plot

The minimum distance that the Gaussians have to be apart such that two maxima can be seen could be called the resolution. This distance is a function of the amplitudes and standard deviations of the two Gaussians which are themselves determined by the quality of the setup.

To find the resolution of this hypothetical setup one could decrease the difference in wavelength between the two lasers till only one maximum is visible and repeat this for all wavelengths.

This question has a lot of extraneous information etc., but I think that's because you aren't really sure what to ask. There is one very simple basic fact you may not know:

Suppose you have a series of data points with separation on the x-axis of $\delta x$. If you compute the discrete Fourier transform of your data you get a complex number for each point on a new axis which has dimensions of $1/x$. For example, if your data represents a time series, so the x-axis is time, then the discrete Fourier transform data is on a $1/\text{time} = \text{frequency}$ axis.

I'm pretty sure this is the part of your problem you didn't already understand, but if it's not, leave a comment.

Let's build up a model by considering three stages:

The answer to this question is given by the so called shift theorem of convolutions: Assuming a Gaussian resolution function, the result is $\sum_{i=1}^k N(f_{i}, \delta f_{meas})$ -- a sum of Gaussian distributions with mean value $f_{i}$, and standard deviation $\delta f_{meas}$. Hence, if the laser spectrum consists of peaks, which are "much narrower" than the resolution of our measurement system, we are able to obtain a "good estimate" of the measurement resolution without using complicated regression methods: We simply fit a Gaussian distribution function to each of the peaks and evaluate their "width" (=standard deviation). This is what your supervisor was referring to.