Pressure near a submerged orifice?

Suppose I cork an empty wine bottle sealing in the gaseous air at 1 atmosphere pressure. I then submerge the bottle in a fluid column as shown on the LHS of the figure below. The pressure at point "p", denoted as $p_1$, is much greater than the pressure in the wine bottle; the wine bottle keeps the air inside at 1 atmosphere pressure. (So $p_1>>p_2$). The point "p" is a "small" distance $(\Delta x)$ away from the bottle opening/cork. The bottle opening is circular with a radius $r_d$. If I were able to instantaneously remove the cork at $t_o$, 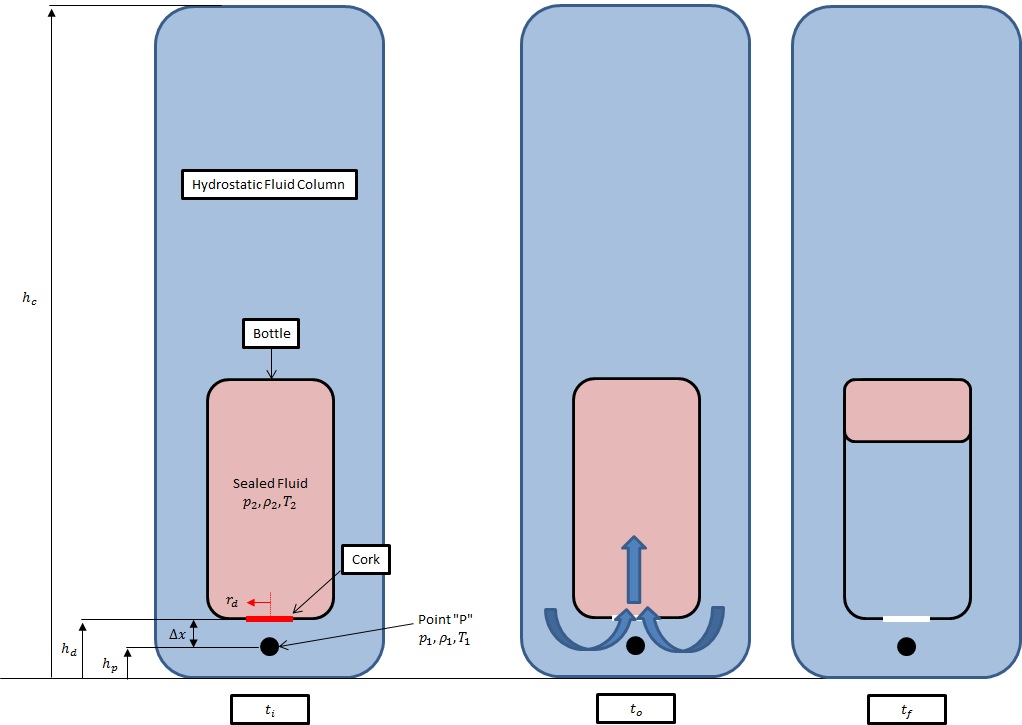 Currently, I envision the pressure at point "p" to respond as shown in the image below:

I made an attempt based on @ChesterMiller's answer, but took a bit of more simplistic approach. I would like to describe what I did and show my results. In turn I would like to kindly ask for critiques in what I had done and how I may improve the physical model.

I re-imagined the physical setup of the system as shown on the LHS of the figure below. Noted on the figure are the liquid column's and gas bottle's properties. 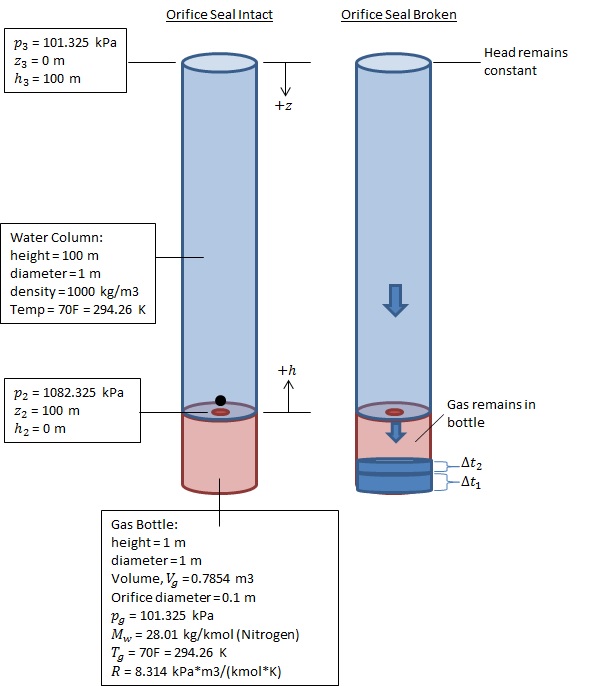 From this point I chose a time increment of $\Delta t = 0.07 s$ (through some trial and error), and then iteratively followed these 7 calculations steps: 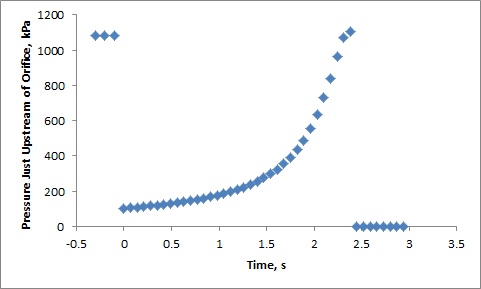 If there are any erroneous steps taken in the above what are they? How might I improve this model?

Envisioning converging hemispherical flow just upstream of the orifice, see image below, I have attempted to calculate the pressure within the liquid column as the gas bottle is filled over time. 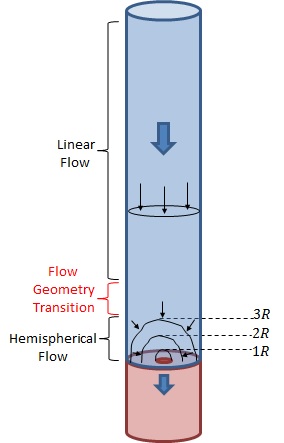 The calculation procedure used was as follows:

Below are two plots of the output from the calculations just described. The top plot shows pressure while bottom plot shows liquid velocity within the system as a function of time. 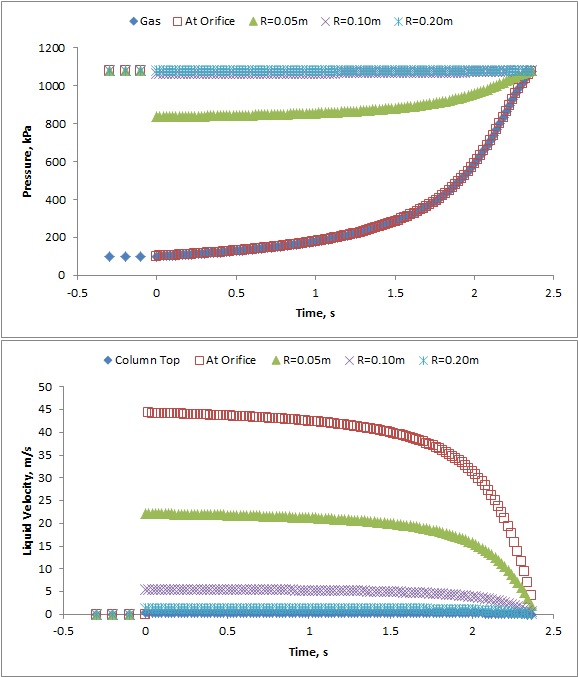 I have noticed that changing the orifice diameter does not change the fluid velocity, rather, it changes the volumetric flow rate and therefore the time to fill the gas bottle. This result was a tad surprising and I wonder if this is an artifact on one or more of the assumptions I have made up to this point.

Again, I would like to kindly ask for critiques in what I had done and how I may improve the physical model.

Here's how I would approach this as a first approximation. Even though the flow is unsteady state, I would approximate the flow as quasi-steady, and use Bernoulli. I would model the air as an ideal gas, with whatever pressure that entails at the current instantaneous location of the fluid boundary. This would enable me to calculate the velocity and location of the air/water interface in the bottle. Knowing the water velocity within the bottle as a function of time, I would model the water flow outside the bottle in the immediate vicinity of the entrance as converging spherical sink flow. Knowing the velocity in the bottle, this would give me the water velocity at the location of interest. Then I would use Bernoulli to get the pressure at the location of interest.

1
Help with ideal gas law manipulation
1
Darcy's law using Hubbert potential vs pseudo-pressure for a gas
3
What determines the dominant pressure-flow relationship for a gas across a flow restriction?
1
Calculating pressure at a point in a pipe?
2
Phase transitions, external and internal pressure and boiling
0
(SOLVED) Calculate the velocity of a gas inputted in pressure difference