Why does my beveled mirror make triplicate "ghosts"?

Here is a picture of my power adapter. You can see in has one green LED lit when charging. 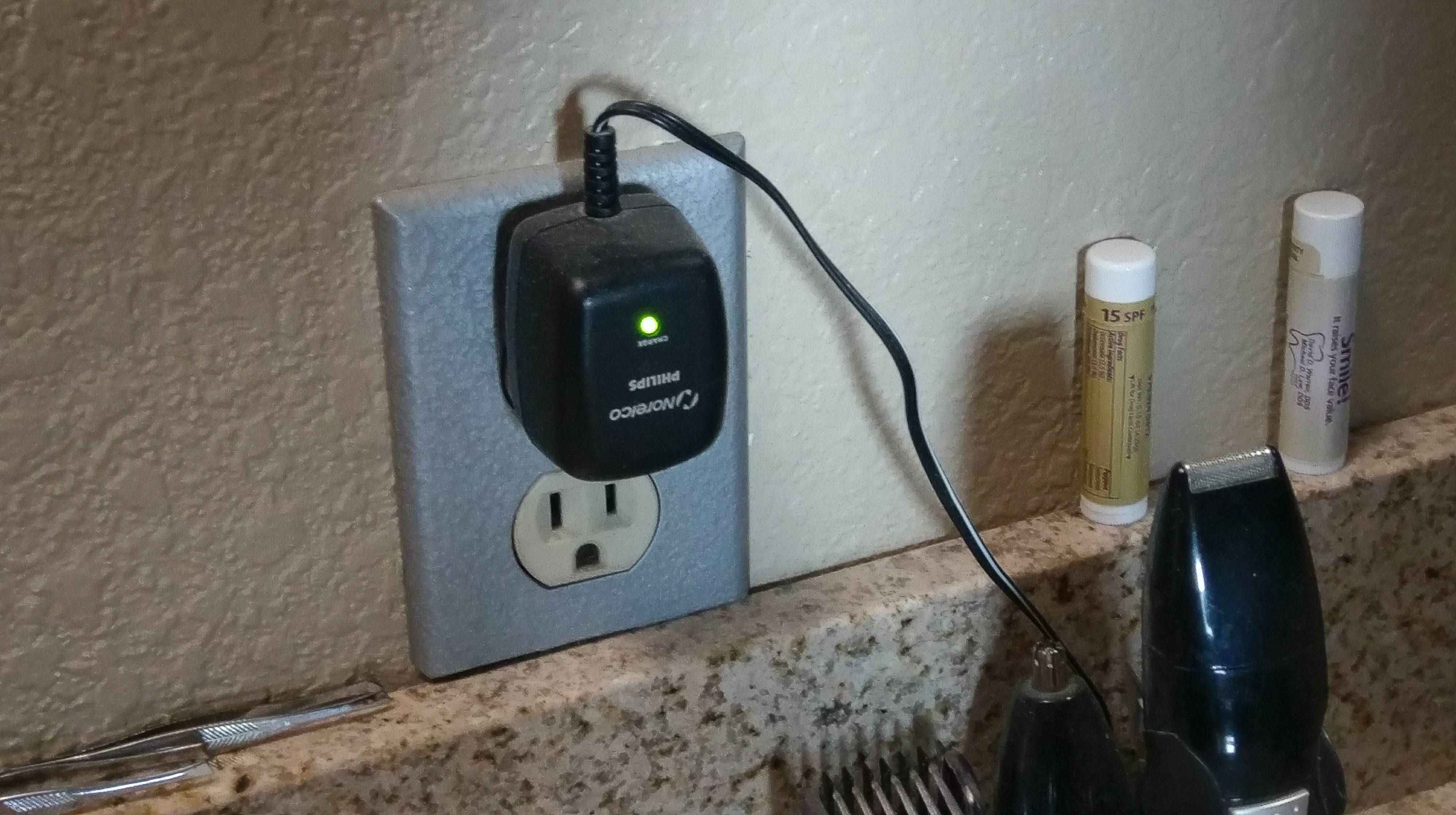 Now here is a picture of my mirror with beveled edges. When I view the power adapter in the mirror, I see three (3) projections of the LED: the original, plus two "ghost" LEDs (one on either side). 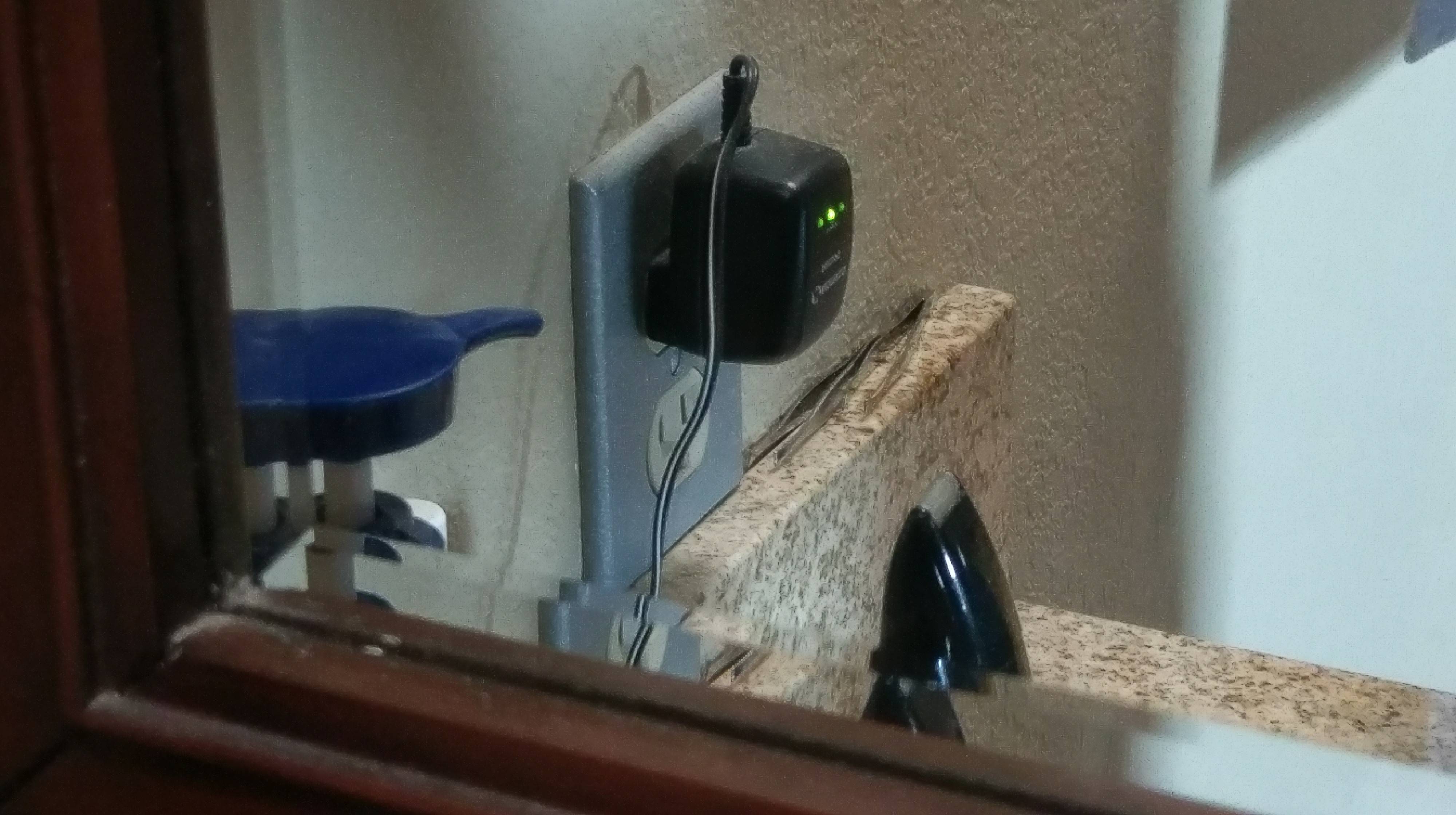 Can someone explain how the mirror's bevels are able to cause these triplicate projections? And why does it only appear to affect the LED (except near the edges)? If the mirror had a different bevel pattern (for example, in the following image), would it affect the number of "ghost" projections? 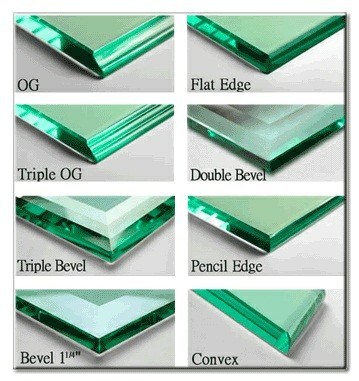 UPDATE: For what it's worth, I took another picture late at night, with the camera lens as close to the mirror as possible to maximize the angle of reflection. Doing this showed me 6 (!) ghost projections, which is (mostly) in line with @Agent_L's answer (There are actually many more "after", but as every next one is, let's say, 90% dimmer than the previous, only the first is noticeable.). Apologies for the poor image quality. 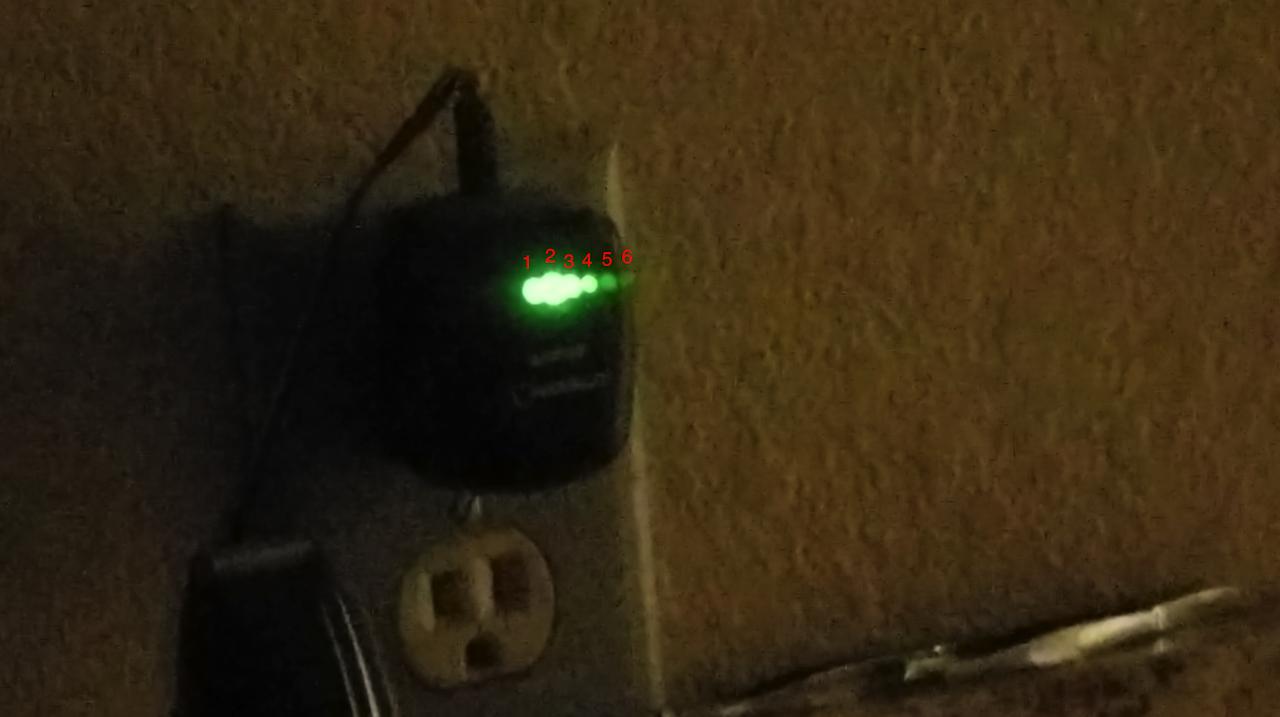 I believe this is what's happening: 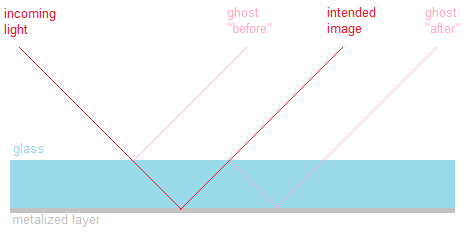 There are actually many more "after", but as every next one is around 96% dimmer than the previous (exact number courtesy of Jan Hudec), only the first is noticeable. They're all spaced nicely and evenly, because this spacing is determined by the thickness of the glass.

This effect has only coincidental relation to the beveled edge. If the glass is very thin, all images appear so close to each other that they appear as blur, not distinct images. The glass has to be quite thick - and thick mirrors tend to have large, decorative bevels. (Also, the observed object needs to be small and standing out - just what your LED is.)

Similar effects happen in eyeglasses, and those are sometimes specially treated to minimize it, known as "antireflection coating".

An effect similar to "afterghost" is deliberately exploited in so called "infinity mirrors". Instead of internal reflection they employ a second, partially transmissible mirror faced inside to increase the reflection into useful levels.

My suspicion is that the ghost images are from reflections off the glass on your mirror. The entire image is getting ghosted (not just your LED), but the ghosts are weak (~5% of the normal reflection), so you can only see it for the bright green light on the black background.

So why is there a ghost to the left and right of the image? Remember, your mirror consists of a clear slab of glass with a smooth metal film on the back. The "regular" image you see comes from the light that goes through the top glass interface (air-to-glass), reflects off the metal, goes back through the glass interface (glass-to-air), and gets to your eye. The ghosts come from extraneous reflections at those glass/air interfaces (5%, as I mentioned before). The first ghost comes from that first interface (appearing to one side of the regular image). The second ghost comes from the second interface, sent back to the metal (appearing to the other side of the regular image). There will actually be more reflections, 3rd and 4th etc., getting progressively (and quickly) weaker.

Check out Floris' answer to this question.

I don't think the bevel is relevant for the ghosts around your LED. I'll say it again: Good eye! And good for you for wondering about it.

This is kind of hard to answer from only this one picture, but I'll give it a shot.

My guess is that the centre LED in the mirror is the one reflected by the actual reflective coating (most likely silver) at the back of the mirror. The one appearing to be closer to the mirror is the reflection from the bare glass surface that you would see even without the coating. Just like you see yourself in your windows when it's dark outside.

The one appearing farther from the mirror (i.e. the rightmost in the picture) is then probably the same effect but for the light coming back from the silver through the glass, reflected at the glass-air surface, that is then again reflected back to you from the silver coating.

The reflectance of an air-glass surface is very low (only a few percent), so the light source must be really bright in order to see this effect. Therefore it only appears for the LED, which is probably much brighter than any other objects in the room.

As you might have already guessed, this has nothing to do with the way the edges of the mirror are cut.

Not the answer you're looking for? Browse other questions tagged visible-light reflection glass or ask your own question.

149
Why does a mirror split my laser beam?

23
Why does my watch act like a mirror under water?
74
Why does a window become a mirror at night?
4
Why does your reflection suddenly turn upside down while slowly walking away from a curved mirror?
22
Why does the spotlight reflected off of a rectangular mirror tend to become circular?
3
why does a mirror show what is in front of it?
0
Why don't we use a plane mirror instead of projection screen?
3
Why white flat surfaces are white and not mirror-like reflective?
2
Does a reflection leave a "shadow" on an imperfect mirror?
0
What is the purpose of glass in mirror as it only reflect very little light?
0
Does a white surface reflect more light than a mirror?