Does a reflection leave a “shadow” on an imperfect mirror?

Consider this very beautiful and expertly drawn image (The black here is walls, while the gray is a slightly opaque window): 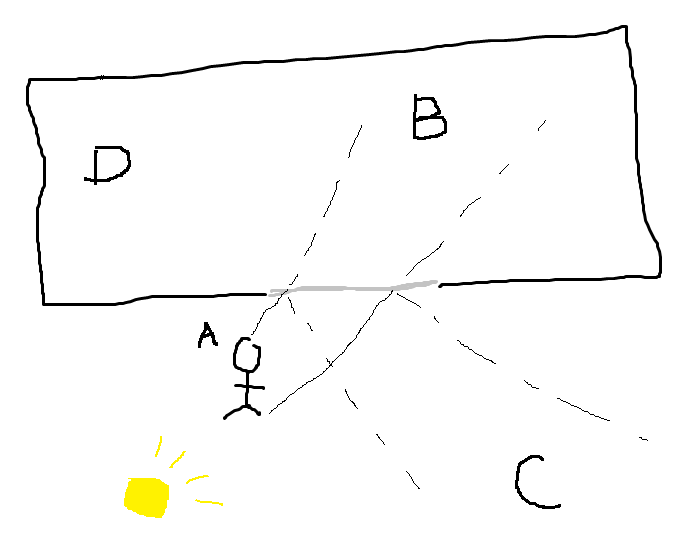 However, would an observer at point D be able to see an image of me projected onto the glass? If the window's opaque at all, then I assume it absorbs light. Would that create a fixed "shadow" which is visible on the window, regardless of where an observer stands? If so, would it be in color?

However, would an observer at point D be able to see an image of me? If the window's opaque at all, then I assume it absorbs light. Would that create a fixed "shadow" which is visible on the window, regardless of where an observer stands? If so, would it be in color?

There will be a shadow — or less inaccurately, a silhouette — on the glass, yes. It will not be a color image of you (or rather, it will be an absence of the color of the sunlight). The image that is "on" the glass, ignoring ordinary transmission, will be the average color of the surrounding illumination just like any matte reflective object, but hard to see because transmission is so much brighter. The silhouette is a particularly easy case since it has the strong contrast between direct sunlight and blocked sunlight.

In real life, the best way to notice this would be if the window is dusty or, for a more extreme case, made of frosted glass, so that there is more scattering of the light than ordinary clean window glass.

You can experiment with the effects of imperfect reflections using a flashlight and a wall mirror. This is not greatly similar to what you asked since there is no transmission through the reflective object, but the geometry involved is related except some things are in the virtual reflected space "behind" the mirror.

If you face a mirror and shine a flashlight at it, holding the flashlight and its aim away from your eyes, you can see several spots of light each corresponding to a different reflection path:

All three of these spots do not move as long as the flashlight is held still, if you don't count ordinary changes of perspective them through the mirror.

Here is a diagram. The red circles are the apparent locations of the three spots of light produced by the single flashlight beam (not counting the simple case of looking directly at the flashlight). 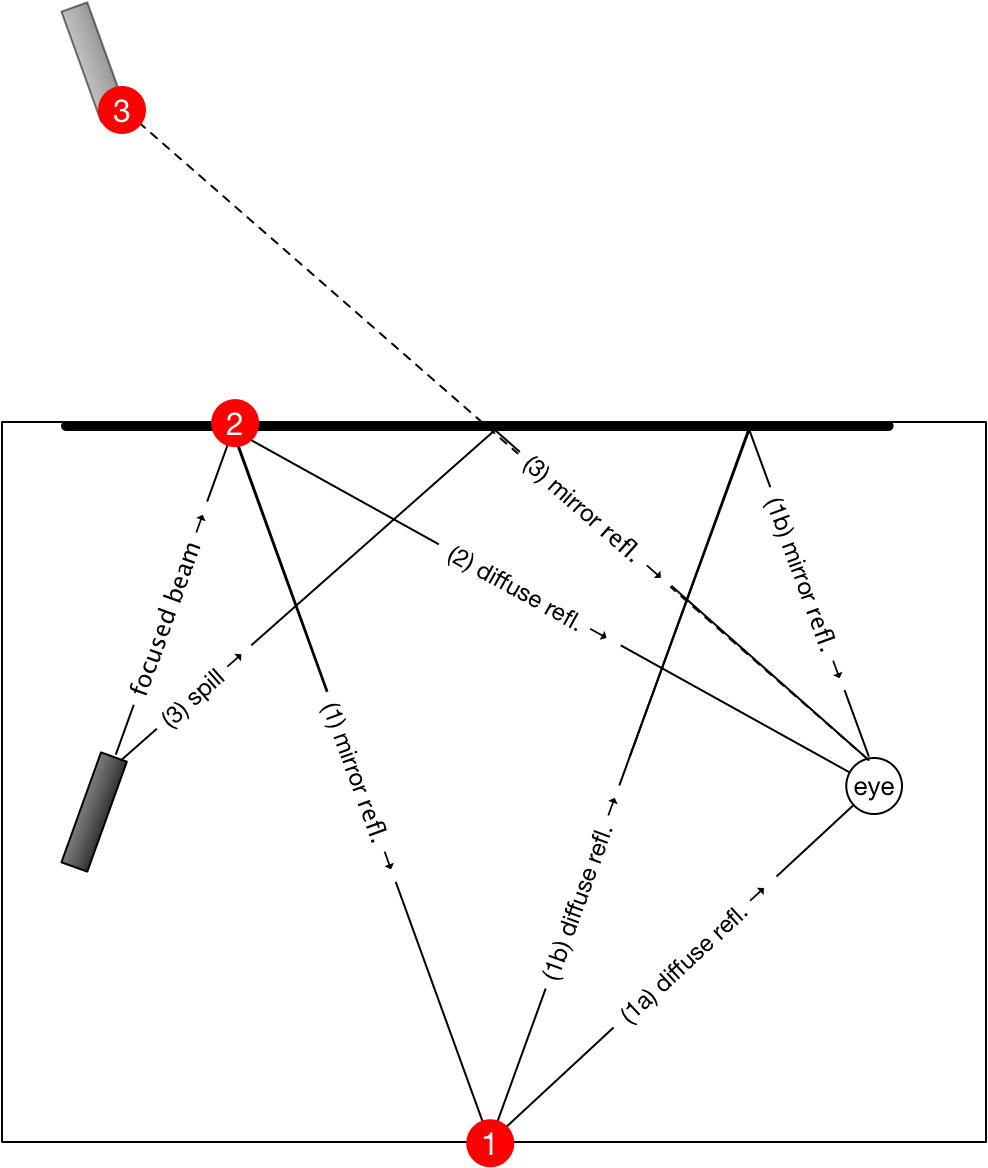 Note that they are all along the line of aim of the virtual flashlight in the mirror (except the path looking directly at the flashlight, which I did not draw) — this is because all of these are points where the flashlight's light was scattered away from the beam — just like if you used the flashlight in smoke/fog the entire beam path would be lit up.

Not the answer you're looking for? Browse other questions tagged visible-light reflection or ask your own question.

7
Why does a glass window reflect white objects white from an atomic scatterers’ viewpoint?
11
The physics behind Google Glass' “prism”
0
Distinguishing between perfect rigid mirror and symmetrical universe
0
Light (Photon) reflecting from an accelerated mirror
0
Reflection in mirror
1
Can periscopes have more than two bends?
0
Why doesn't central obscuration put a big dot in the middle of a PSF for a centrally obscured optic?
0
Far sighted mirror reflection
0
Does the accelerated mirror violate the energy conservation principle within the framework of special relativity?
2
Image Formation by a Spherical Mirror: angle change from $-\theta_2$ to $\theta_2$?