Direction of magnetic field in a solenoid

What is a easy way of finding the north and south poles of a solenoid?

The north and south pole of a solenoid depends on two factors. One, the direction of the current flow and two, the direction of the winding (clockwise or counter-clockwise). Start by determine the positive pole of the power source (e.g: battery), then the end of the solenoid that you are going to connect to it. Now, looking down the solenoid tube determine what direction is the winding. If clockwise in relation to the positive wire then is the south pole, if anti-clockwise then is the north pole. So, to summarize the magnetic south pole is always clockwise in relation to the positive wire.

To identify the north and south poles of a solenoid from the direction of the current, I think the easiest method is this mnemonic, 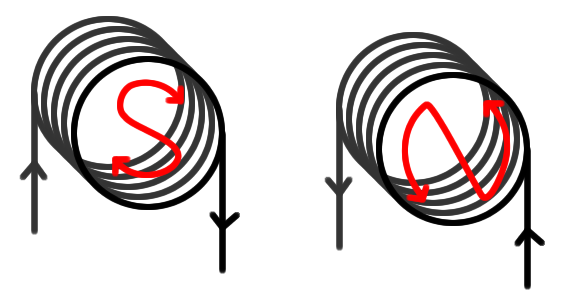 which I explained in a bit more depth here. To get the direction of the field lines, then as always the field lines come out of the north pole, and circle back to the south pole.

Just in case anyone else stumbles on this question, the right-hand rule is really a family of rules that have a specific handedness. The standard first form of this rule is:

This has a very useful direct interpretation when you have a test charge which is a positive ion with velocity $v$ where the Lorentz force is $q~v \times B = F$, your first finger is the velocity vector, your second finger is the magnetic field, and the resulting force points alongside your thumb.

Of course with an electron you then have to factor its negative charge into this to find an opposite force, or you have to use your left hand which is like using your right hand but with an intrinsic minus sign built-in.

Another application of this rule is in torque $\tau = r\times F.$

But there are two more useful facts to connect this to the rest of the family of rules:

Now if you point your thumb along a line of current, your palm (more specifically, the metacarpal bones) puts your fingers (phalange bones) out at an offset and they only curl a certain way around the thumb, counterclockwise if looking at the thumb head-on. So as per (1) the field is either parallel or opposite to the way your hand is curling, and per (2) it's, in fact, parallel. (Proof: Remembering that your left hand carries an intrinsic minus sign, place your left middle finger on top of your right index finger in the opposite direction, to cancel out this minus sign: then when pointing your left index finger parallel to your right thumb, to symbolize a charge moving in the same direction as the line charge, you should see your left thumb point towards your right palm, indicating an attractive force.)

So the second form of this rule is:

Point your right hand's thumb along a line of normal current; the magnetic field curls around it in the same way that your fingers curl about your thumb.

Finally, we have the polarity of magnets, which requires a definition:

Imagine applying the second form of the right-hand rule to a very large solenoid. In other words imagine placing your right thumb along a big cylinder.

Now here's the genius part: think of a solenoid with its North pole pointing up, and curl your right fingers around it in the direction of that counterclockwise current: your right thumb should be pointing straight up, too! That leads to a third form:

Curl your right hand's fingers around a solenoid in the direction of normal current flow; your thumb points in the direction of the North pole and field lines are coming out of your thumb, they arc over the back of your hand, towards the butt (pinky-side) of your hand. Similarly, if you know the North pole of a magnet, point along it with your right thumb and the curl of your fingers describes the currents that are causing that magnetic field.

The thumb more-technically points in the direction of the "magnetic moment" of the current loops that we're talking about, which is more properly defined by torque: a current loop in a magnetic field $B$ feels a torque $\mu\times B$ where $\mu$ is its magnetic moment. This tends to energetically favor the alignment of the two magnetic fields with each other, though since magnetic fields do not do work on their own, it often instead causes Larmor precession. On Earth the magnetic fields point vaguely towards the geographic North Pole, so energy minimization says that if you leave a magnet undisturbed it will point with its "north pole" (magnetic moment) aligned towards Earth's geographic North Pole, hence the name.

(I'm mentioning this because if you really think about it, the fact that the magnetic fields are pointing towards the Earth's geographic-North Pole means that they must enter the Earth at that point, which makes it actually a magnetic-south pole; in other words Earth's magnetic moment points from its North Pole towards its South Pole. In other words, opposite sides attract and like sides repel and all that.)

2
Figuring out North and South Magnetic Poles for Earth
1
Is it possible to make an electromagnet with two like ends?
0
Does the current through a solenoid flow from the south pole to the north pole, or from the north to the south?
0
What happens when a compass is suspended inside a current carrying solenoid?
0
A question about the magnetic field and magnetic poles of a solenoid
0
Electromagnet solenoid & DC Power Supply
0
Motion of a magnet inside a solenoid
0
Compass Needle between two solenoids