I am trying to understand the following statement about quantum critical regions associated with a quantum phase transition from page 4 of these lecture notes on holographic superconductors:

The QCR is characterized by the requirement that T be large compared to the dimensionally appropriate power of (g−gc). It seems reasonable to expect that the effective scale invariant field theory valid at the critical point, now generalized to nonzero T, can be used to predict the behavior of the system in the QCR.

The phase diagram of the system: 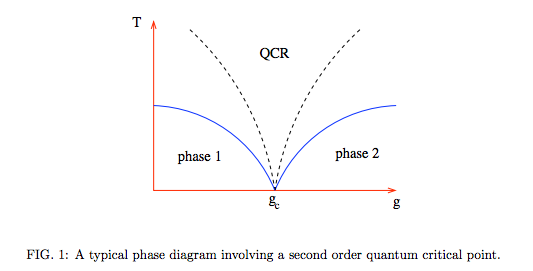 I understand that, at large $T$, the mass gap becomes negligible, $\Delta \ll T$, and the coherence length effectively diverges, $\xi \gg T^{-1}$, just like close to the critical point. But why should the emerging scale invariant theory be the same as the one close to the quantum critical point? Where does the condition that

come from to characterise the critical region?

I have found an answer to the question in Sean Hartnoll's Lectures on holographic methods for condensed matter physics:

Not the answer you're looking for? Browse other questions tagged quantum-field-theory condensed-matter phase-transition thermal-field-theory or ask your own question.