Why we are not able to throw further with two hands than with one hand?

Why we are not able to throw further with $2$ hands than with $1$ hand? 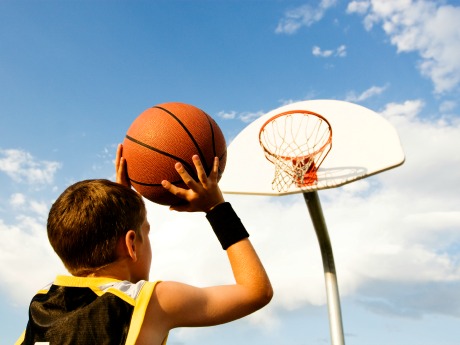 To throw far, one must throw at high velocity. The mechanics of the human body allow for the fastest velocities through the generation of high torque, rather than linear force. In other words, the high velocities are achieved by pivoting the body around an anchor point to generate rotational acceleration. This allows one to more effectively utilize one's entire body strength, including the elasticity of various ligaments, as is evidenced in the fastest baseball pitches. Clearly, such rotational motion can be best achieved when launching the object from one hand, rather than both simultaneously.

To throw an object a certain distance, you need to provide that object with momentum. Momentum is the integral of force over time.

If you look at how you throw with one hand, typically it involves a rotation of the shoulder, and maybe even part of the body. This means that the force can be applied over a greater distance, thus for a longer time.

By contrast, if you use both arms, the range of motion is typically much shorter. So while you have more force, the distance is less.

Often, the limit on the velocity you can reach is not given by the force of the muscle, but rather by the speed with which your muscles can contract. There again, if you are able to add rotation of the upper body, that results in speed of the shoulder which can then be added to the speed of the hand relative to the shoulder to give higher total speed.

Much of this is more about biology than about physics; but I hope the above gives you some insights into the complexity of this issue.

Some of this is nicely explained in this article, from which the following diagram gives you a sense of what I was talking about:

So if you have a very heavy object, it is possible that the additional force of two arms is significant (think of an object you cannot lift with one hand as an example); but for typical balls, other factors dominate.

The force applied by two hands is greater but when we throw by two hands (the basketball) time or rather distance till the force applied is less. While when using one hand you can take your hand from back and start appling force for more time . Hence the work done while throwing by a single hand is more hence the ball goes far.(In greater sense you take the ball from your head or chest till both arms get stretch but while doing it single handedly you can apply force and take the ball from behind your head and you can also twist your body and hence apply the force for more time)

While you are certainly right in stating that you apply more force when you use two hands, you haven't considered the fact that some component of your horizontal force of the two hands cancel out. 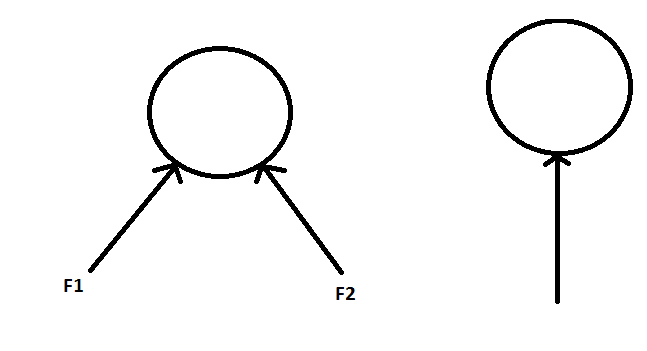 Some part of the horizontal component of the forces cancel out.Here is a better diagram to compare the two. 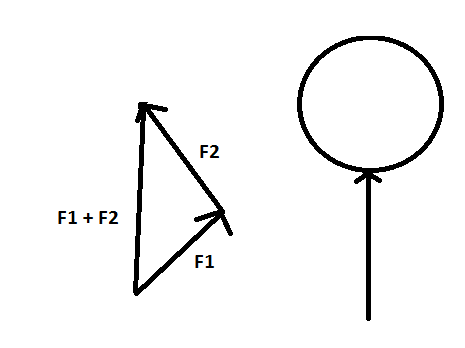 Moreover, as kleingordon stated, it is difficult to apply a strong force in the direction of motion of the ball while using two hands. Combining these factors, using two hands is less efficient.

This is just a reasoning. In reality, it depends on the angle between the two hands and the capability of the person. Therefore, there is no definitive answer to the question: "Why we are not able to throw far by 2 hands than that by 1 hand?"

Not the answer you're looking for? Browse other questions tagged newtonian-mechanics forces projectile biophysics or ask your own question.

126
With Newton's third law, why are things capable of moving?
1
Vector Addition — Direction
5
Why must a body lose energy to an opposing force?
0
Net torque on an object when when all the forces pass through a common point
1
Problem in getting correct coefficients of frictional forces in the Lagrangian equation
0
Actual mass and Apparent mass due to Force