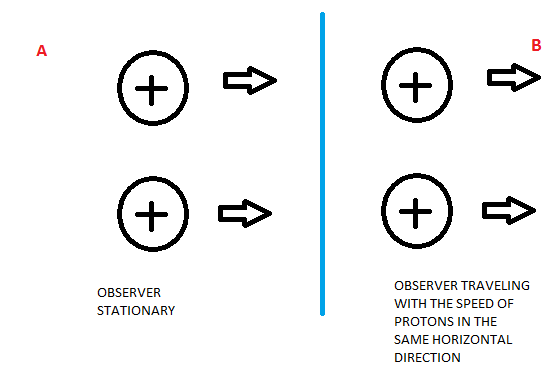 The question I have about it is how we can get the same result of net force acting on the individual protons if we judge the system from 2 different reference frames. One using more of the magnetic part of the electromagnetism, other more of electrical part of it to calculate the forces.

For simplicity I've decided to ignore the magnetic field created by the particles spins. I think they do not matter for this mental excercise.

In example A, both protons are traveling in the same direction and with the SAME speed. If the observer is stationary, he sees both of them moving away from him at the same speed. Because the protons have the same charge, they are repelled away from eachother by electrostatic force. But because they are moving, the upper proton creates a magnetic field around itself and that field acts on the other proton in such a way to push him up (towards the other proton). The same is true for the other proton which magneticaly attracts the other proton. The direction net force is dependant on the speeds of protons and how far away from eachother they are. So in one case they might attract eachother (high speeds) and in other case repel (close together).

I've read the examples of a current conducting wire and it's effect on a moving independant charge. That picture makes sense because of space contraction, so there are more of opposite (stationary) charges in the same volume of space (in a wire) than if the charges weren't moving relative to eachother. That creates an electrostatic force which can in different reference frame be considered a magnetic force. But here we do not have the "help" from those opposite charges. And I believe the same effect still occures. How?

Force is not a Lorentz invariant and neither is acceleration. The protons always repel each other, with a force that combines the electric and magnetic components of the Lorentz force and depends on the frame of reference of the observer, but which is maximised in their rest frame and which approaches zero as the protons become ultra-relativistic.

The problem you may be having is in thinking that force is a relativistic invariant - it is not.

Electric and magnetic fields are transformed when looking at them from a different frame of reference.

I feel you are missing the relativistic formulas for the electromagnetic fields spread by uniformly moving charges. These can be found as formulas (1538), (1539) in this link.

In this case the velocity of the moving charges matters in both moving frames so you should get the same physical phenomena.

Forces are different in different frames, and that is not a problem. If force was zero in some frame and non-zero in another frame, that would be a problem, but luckily there is a repulsive force between those two protons in all frames.

In case of 2 equal charged particles of charge $e$ (as the proton) at rest in a reference frame their mutual force is according to Colomb's law the well-known formula (in SI-units): $F=\frac{e^2}{4\pi \epsilon r^2}$

$r$ is the distance between both, and $\epsilon$ the dielectricity constant of the medium. If both particles move with velocity $v$ if observed from another reference frame its force (both electric and magnetic force are considered in the following) is

where $c$ is the speed of light. If $v=0$ the old Colomb's law is recovered. On the other hand in case both protons move at speed of light $c$ the force between is zero. In other words: at speed of light electric colomb force and magnetic Lorentz force cancel out each other (in this particular case). This is how electrodynamics works. Length contraction only happens in the direction of motion which is perpendicular of the direction of force, it does not play any role here. You could imagine that due to the time dilation which infinite at speed of light that the repulsion is in fact frozen, it fits with the intuitive view one might have on this effect. A derivation of this formulas can be found in the standard textbooks, Jackson for instance.

Edit: Apparently the second formula has to be corrected by a factor $\gamma$. Then it turns out to be $F=\frac{e^2}{4\pi \epsilon r^2}\sqrt{1-\frac{v^2}{c^2}}$ The qualitative argumentation is not changed, however.

Not the answer you're looking for? Browse other questions tagged electromagnetism special-relativity forces inertial-frames observers or ask your own question.

4
Two electron beams exert different forces on each other depending on frame of reference?
2
Is the magnetic field of a moving electron caused by length contraction in the direction of motion?
3
Can magnetic force really be just electric force in a different frame?
3
Relativistic 2-body problem with instantaneous Colomb force
0
Two protons moving in opposite directions. Special relativity and electromagnetism
1
Is (net) force invariant in special relativity?
1
Why force between charges increases when it moves, instead of decreasing?
0
Relativistic electrostatics
0
Magnetic field between two moving particles contradiction

20
Special relativity and electromagnetism
4
Explanation for a much simpler version of the twin paradox?
1
Confusion on relativistic electromagnetism of two charge particles
1
Lorentz Transformation in Different Reference Frames
2
Does protons moving parallel to each other exert magnetic force?
9
Will a beam of protons and a beam of electrons attract or repel each other?
0
Two protons moving in opposite directions. Special relativity and electromagnetism
7
Why is magnetism used to refer to two seemingly distinct phenomena?