Consider the following system of two blocks, with the larger block having mass, $M$ and the smaller block $m$. 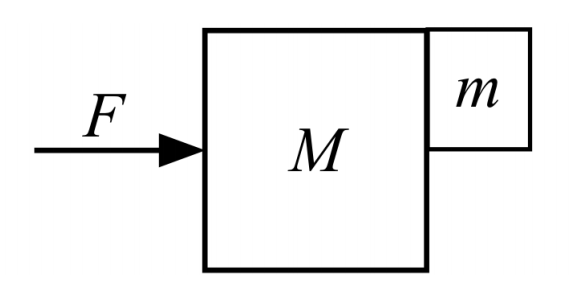 I want to find the minimum force such that the smaller box does not slip as the two block system accelerates. My approach is as follows.

We know that the force of gravity acting on the smaller mass is $mg$. Therefore, the force of friction must counteract this force, such that $mg=\mu F_{Mm}$, where $F_{Mm}$ is the normal force parallel to the surface along which the blocks are moving. However, $F_{Mm}=F=(M+m)a$ for the two block system. This leaves us with, $\mu(M+m)a=mg\rightarrow a=\frac{mg}{\mu(M+m)}$. Consequently, the minimum force required is given by $F=ma=(m+M)\frac{mg}{\mu(m+M)}=\frac{mg}{\mu}$.

$mg=\mu N$ is correct, where $N$ is the normal force between the 2 blocks - ie horizontal. $\mu N$ is the friction force parallel to the contact surface - ie vertical.

Not the answer you're looking for? Browse other questions tagged homework-and-exercises newtonian-mechanics forces acceleration friction or ask your own question.

1
Preventing a block from sliding on a plane (with friction)
2
Is the newton's second law for a body experiencing a frictional force, relative to the surface in contact?
1
Two-block system connected to a spring
0
Two Blocks and a Cord (Friction and Tension)
0
Does kinetic friction increase a body’s acceleration once the body starts moving?
1
Two stacked blocks with the upper block pulled with force $F$
0
Minimum force required to make an object slipping