Is an elementary particle traveling through a vacuum the *same* particle at points A and B?

This is a question I've wondered about for a long time.

Imagine an elementary particle moving through a vacuum. Take any two arbitrary points along its path; we'll call them points A and B. Is the particle at point A the same particle which is later at point B? Or is the thing we perceive as moving through space more akin to a wave moving through water (where the "energy" moves but the water molecules comparatively little)?

As I understand it:

The first part implies to me that space could be thought of a bit like a LCD screen (with pixels) and each field would be one of the colour (RGB) components of each pixel, which extends across the entire screen. In that case, particles moving through space would be more like pixels lighting up and turning off, giving the illusion of motion. The second part implies to me that notions like location and the long-term existence of particles may be a misconception altogether.

Sub-question: if individual particles from one moment to the next can't be said to be the same particles, does that pose ship of Theseus questions for macroscopic objects? (E.G. a rock floating in space.)

Have a look at this bubble chamber picture of proton antiproton annihilation:

This is from an actual experiment, not a thought experiment. So now what would you call these tracks? They bend in the magnetic field which is perpendicular to the plane of the picture, according to the laws of classical electrodynamics, and they all fit the mass of what is called a "pion" with a charge + or - the charge of what is called an electron, in the milikan oil drop experiment. On the lower right corner one sees an elementary particle , a muon, coming from the decay of a pion.

Is an elementary particle traveling through a vacuum the same particle at points A and B?

So we called even pions and antiprotons "elementary particles" before discovering their compositeness with many more and more sophisticated experiments.

Our senses tell us these are "particles", at least they have the footprint of a particle and what starts at the vertex as a pion, ends at the end of the chamber as the same pion, fitted beautifully with the classical equations of motion in a magnetic field.

The detectors of the LHC its self assume intrinsically that the electron that left the vertex of interaction is the same one through the detectors which measure its energy: 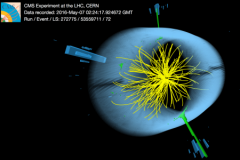 So the whole construct of the detectors is based on the identity of "particles" starting from the vertex, following classical electrodynamics paths in the vacuum and in the detectors and identified by their energy losses and curvatures with specific masses and charges.

Quantum field theory is a beautiful mathematical model of the interactions of innumerable similar events as the ones displayed, where the assumption is made that the standard model of particle physics with its table of elementary particles is the underlying level of nature, each elementary particle represented by a field that fills the whole space time ( a lorenz invariant aether) and that what we see in our bubble chambers and LHC detectors are the result of creation and annihilation operators on these fields, operating on the free particle quantum mechanical solution for the specific particle. So what one measures in dimensions of microns as a classical track, is a disturbance in the specific field propagating according to the rules of quantum field theory.

If you study the sea, often there is a large rogue wave coming in. Our brain's pattern recognition calls it the "same wave" even though the atoms it is made out of continually enter and leave the bump. The brain follows momentum conservation. The model of physics at present, due to quantum number conservations and energy/momentum/angular momentum conservation laws allows us to attribute an identity to a propagating "electron" from the beginning to the end of its macroscopic footprint, which is bounded by the heisenberg uncertainty principle .

I believe the paper How Classical Particles Emerge From the Quantum World (Dieks, Lubberdink, 2010) exactly adresses your question.

The paper thesis is that when we have in mind the idea of a particle, we actually construct an object from indices in the quantum formalism, but this operation is misleading in the sense that the classical concept of particle does not match this identification.

In other words, when one classicaly describe a particle, one is not only giving more definiteness to a corresponding quantum state, one is actually wrongly making up that correspondence entirely.

Not the answer you're looking for? Browse other questions tagged quantum-mechanics quantum-field-theory wavefunction wave-particle-duality elementary-particles or ask your own question.

25
What actually are virtual particles?
7
Mental picture of interactions in QFT
7
How do (and don’t) particles emerge from fields?