I'm taking a a first-quarter mechanics class at a university and we're currently covering Newton's laws of motion. The problems themselves are pretty similar to what I did in high school, but it seems to be taking a bit more formal approach when it comes to notation and the mathematics behind it. In particular there's a big focus on finding the constraints on the acceleration of two connect objects as part of solving the problem. The homework problem I'm currently working on gives me this diagram of a pole with two masses leaning against a wall: 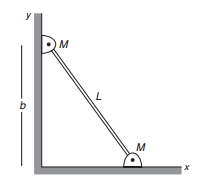 Before asking me anything about finding the actual motion of this system, it wants me to find the constraints of one side of the pole's acceleration with respect to the other side's. I found the relationship of the positions to be $x_1^2+y_2^2=L^2$. I'm a bit confused on how to proceed from here, though.

The rest of the problem only asks for the initial acceleration of the components of the system, so I guess technically this is enough, at least for the problem, but is it really practically useful? It seems like the only way it would be is if the differential equation I found could be solved, but nothing in this course has taught me how to solve it.

I shall drop the subscripts because there is only one $x$ and one $y$.

If the system starts from rest in the diagram then $\dot x(0)=\dot y(0)=0$ and $y(0)=b$, from which you can find $x(0)$. From these you can use your equations to get one relation between $\ddot x$ and $\ddot y$. But you still need some other information to get both values for these accelerations.

For the 2nd relation you can apply Newton's 2nd Law; this relates the forces and accelerations on each mass. Note that the compression in the pole transmits force between them. This will give you a 2nd eqn relating $\ddot x$ and $\ddot y$. For example, if the compression force in the pole is $T$ and the angle which the pole makes with the vertical is $\theta$ then $T\cos\theta - Mg= M\ddot y$ and $T\sin\theta=M\ddot x$. (I assume that there is no friction between the masses and the wall or floor.)

2
Damped Coupled Oscillations
2
Coupled ODEs that model a quad rotor
0
How to find a constraint equation to relate the two tension forces in this arrangement?
2
Path of a particle in central force motion
3
Do these Lagrange equations of 1st kind exhibit numerical instabilities?
0
How do I non-dimensionalize Newton's Law of Gravitation for the 3-body problem?